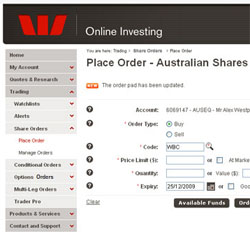 According to a statement issued by the bank yesterday, the new platform offers improvements such as home page customisation, smarter portfolio management, enhanced dynamic charting, one-click access to the most popular functions (such as buy, sell, quotes), a most popular stock feature and a better level of access to market research from Aegis, Reuters and Morningstar.

Westpac Securities chief James Staltari said the new platform (supported by a marketing campaign) was expected to increase the bank’s broking customer base by about 8 percent over the next year.

The news comes some six months after Macquarie Bank also re-launched its online trading platform, dubbed Macquarie Edge. TechNation Australia commentator Kim Heras at the time, in an extensive overview of the new platform, wrote that the system ‘blew him away’.

Like Westpac’s new most popular stock feature, Macquarie Edge allows investors to access data on what other users of their platform are doing — for example, what shares they are holding and watching.

The major two players in the online banking field are the Commonwealth Bank’s CommSec and E*Trade, which is owned by Australia and New Zealand Banking Group (ANZ).

CommSec has recently revealed plans to overhaul its charting tool, describing the new functionality as simpler and more intuitive. The new tool will be available from February 2010, running in parallel with existing charting options, while in March the old options will be decommissioned.