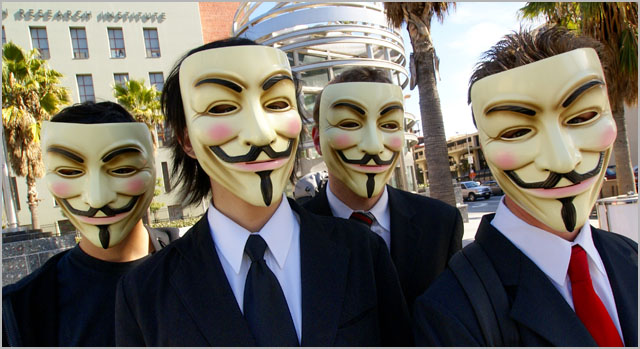 news The Australian Federal Police this morning revealed it had arrested two Australian men who it alleged were members of the loose-knit confederation of Internet activists who self-organise under the banner “Anonymous”, claiming that the pair were involved in “a campaign targeting Australian and international websites”.

‘Anonymous’ is not a formal organisation but is a loose-knit collective of Internet activists who commonly commit denial of service attacks or break into online systems with a view to punishing organisations which they believe are not giving global citizens fair treatment. The organisation has been active in Australia and in targeting Australian organisations for some time. It does not appear to have been involved in serious criminal activity, but rather in what might be termed Internet activism.

For example, in September 2010 Anonymous conducted a denial of service attack against the Australian Federation Against Copyright Theft, which at that stage was involved in a high-profile lawsuit against national broadband provider iiNet. Similarly, in July 2012 Anonymous published some 3.5 gigabytes of data sourced from Australian telco AAPT, in protest against a wide-ranging package of surveillance and data retention reforms currently proposed by the Federal Government. It has also been engaged in attacks against the Federal Government itself.

In a statement issued this morning, the AFP said that a long-term investigation had resulted in the arrest of two men in two states allegedly involved in a campaign targeting Australian and international websites. The AFP will allege in court that the two men claimed to be members of the online issue motivated group ‘Anonymous’.

The AFP said that since 2012, people who claim to be members of ‘Anonymous’ have targeted a number of Australian government and corporate networks. These attacks have resulted in theft of personal data, defacement of websites and Distributed Denial of Service (DDOS) attacks causing websites to drop offline.

National Manager High Tech Crime Operations Tim Morris claimed attacks such as these could have a serious impact on government and business services.

“Hacking activities can affect everyone from small businesses right up to large government organisations,” said Morris. “These acts can cause serious disruption to government and business networks, which in turn can be catastrophic for people who rely on these networks to run their small business or administer their entitlements or personal finances.”

“The impairment or disruption of communications to or from computer networks is a criminal act and can have serious consequences; it is not harmless fun.”

AFP officers last night conducted search warrants at residential addresses in Penrith, NSW and Scarborough, WA. A number of computer hard drives and other equipment were seized during the warrants. It is anticipated that it will take several months to analyse these items due to the amount of information stored on them.

It will be alleged in court that these two men were known to each other online and targeted organisations including a large internet service provider and web servers hosting Australian and Indonesian government websites.

The 18-year-old Penrith (New South Wales) man was charged with the following offences: Unauthorised modification of data to Netspeed ISP located in Canberra, ACT, to cause impairment, contrary to Section 477.2 of the Criminal Code Act 1995; and unauthorised access to and modification of restricted data belonging to the ACT Long Service Leave Board, Canberra, ACT, contrary to 478.1 of the Criminal Code Act 1995.

The arrests are not the first time the AFP has targeted Anonymous in Australia. In April 2013, for example, the Australian Federal Police said that an 17-year-old youth suspected of being a member of ‘Anonymous’ had appeared in Parramatta Children’s Court on charges related to “unauthorised access to computer data”.

opinion/analysis
It appears to be the case that the AFP is seeking to make an example out of these individuals. I received a phone call from the AFP’s media unit this morning to let me know about this media release — indicating that the AFP wants to see the information about the arrests distributed throughout the media.

I wrote the following in April 2013 when a similar arrest of a 17 year old man was publicised by the AFP, and I largely feel it applies also to this case. Obviously it’s a bit of a different story when it comes to the 40-year-old who was arrested — he is of an age where he should perhaps be finding other forms of protest. However, I do hope people don’t get too serious about targeting this 18-year-old. At that stage, I would normally argue for leniency, having been a rather angry 18-year-old man myself only 15 years ago.

“As hard this feels to believe to me now (I’m 32 years of age), I was 17 once and getting myself into plenty of low-level trouble poking around on the Internet and the local networks of my school and then university. I suspect a lot of IT-savvy youngsters are like that, and this is always how I’ve seen the Anonymous network; not a really serious criminal organisation, but more like an activist group; using today’s technological tools to make political points and protest against unfair authority rather than creating actual serious damage.

I don’t know what this Sydney youth has done; although I suspect that will come out shortly in their court case. However, what I do know from dealing with it extensively over the past decade is that the Australian Federal Police tends to be a little heavy-handed and not very nuanced in matters relating to “cyber-hacking” and so on. I don’t think the AFP would be inclined to cut this suspected member of ‘Anonymous’ any leniency. The AFP doesn’t usually have much of a sense of humour.

To my mind, however, everyone involved in this situation should keep in mind that this individual is quite young — just 17 years of age. And they haven’t likely been involved in criminal activity for a profit; likely their alleged crimes are ones representing political protect rather than a commercial endeavour.

With this in mind, I hope everyone involved in this case doesn’t get too serious about it. Someone who is a member of ‘Anonymous’ at 17 is very likely an intelligent and sensitive person with great skills and potential — in the long-term, I suspect many young people like this will make excellent, stable and highly societally aware members of the IT industry. Let’s not go too far and cut off their future life before it really begins.”