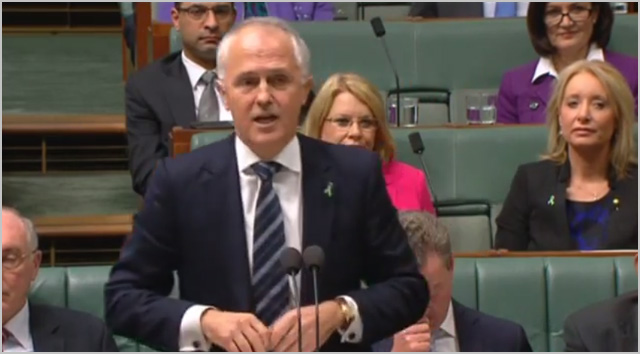 news Communications Minister Malcolm Turnbull has stated that he will seek to publicly release his ‘Blue Book’ incoming ministerial briefing if the Opposition will consent to release a number of NBN-related documents which were considered as part of the previous Labor administration’s cabinet.

Speaking in Parliament this week (YouTube video), Turnbull claimed the decision was not his as to whether the document should be released publicly. “The decisions about incoming ministers briefs are taken not by the minister but by the senior public servants that take them,” the Liberal MP said.

“But I would be prepared — very, very happy — to encourage my secretary to release that incoming ministers brief if the Leader of the Opposition were prepared to consent to release all of the cabinet papers relating to the NBN.”

Turnbull appears to especially be referring to a reporyt produced by investment bank Lazard back in 2010 that warned the then-Labor administration of major risks to the NBN plan. Details about the report were recently revealed by The Australian newspaper, but the report itself has never been released publicly. It was one of a number of reports commissioned by the Government at the time and presents one view of the NBN. Other reports presented different views.

Said Turnbull in Parliament. “On the weekend we learnt that the Labor government had been advised by its investment banker, Lazard, that the NBN, on the government’s plan, was going to result in a $31 billion loss—a negative net present value. And they did not share that with anyone. The NBN has been the characteristically reckless Labor undertaking from the very start—from the moment it was conceived by Senator Conroy and Kevin Rudd on the back of a beer coaster on a VIP flight.”

“And that beer coaster should be elevated. It should be an exhibit in Labor’s pool room of horrors, it really should. It should be there with other historic artefacts, such as the fridge at the Lodge on which Prime Minister Gough Whitlam approved the Khemlani loans arrangements, to bypass the loans council. And, of course, the Labor pool room of horrors should not be without the lazy susan from the Hong Ho Vietnamese restaurant where the Leader of the Opposition plotted the downfall of Kevin Rudd!”

Separately, Turnbull said in a statement on Monday: “The former Finance Minister, Senator Penny Wong, appearing on Meet the Press yesterday, did not dispute that advice had been given but complained it was a “selective leak” by which I understand her to mean that there was other advice which supported the Labor Government’s claim that the proposed investment in the NBN would generate a positive rate of return of 7.1% and thereby realise a profit for the Commonwealth as opposed to the gigantic loss Lazard had warned against.”

“She and Bill Shorten can put this matter to rest very quickly. A new Government does not have access to the cabinet papers of its predecessor. However the Leader of the Opposition can agree to access being granted (see Cabinet Handbook p. 46).”

“Mr Shorten should agree that all advice given to the previous Government relating to the establishment of the NBN be released. That way, the Australian people will be able to judge for themselves whether this extraordinary project, undertaken without any cost benefit analysis, was grounded in economics or politics.”

Delimiter has contacted the office of Bill Shorten to seek comment on whether the Opposition Leader will release the document Turnbull is seeking. Shadow Communications Minister Jason Clare, who posted the ‘Blue Book’ question in Parliament to start with, has stated it is up to Shorten to decide whether the Labor documents are released.

opinion/analysis
Labor has little to lose from releasing the Lazard report (and indeed, other documents relating to NBN advice given to cabinet) at this point. It might as well get these documents out on the public record so that they won’t keep on coming around to haunt the party in the pages of The Australian every so often. Plus, I’m sure that the Lazard report isn’t quite as single-faceted as it’s being painted, and that it actually contains a variety of advice. It would be good to get this complexity out there — the more information we have, the better the policy formation process will be.

Plus, by releasing the Lazard report and perhaps a couple of other key NBN documents, which are really only of historical interest at this point, Labor will have a lever to pressure Turnbull to be more transparent and release more documents himself, including the Blue Book. I remind Labor that Turnbull has already promised publicly to be more transparent, saying in late September: