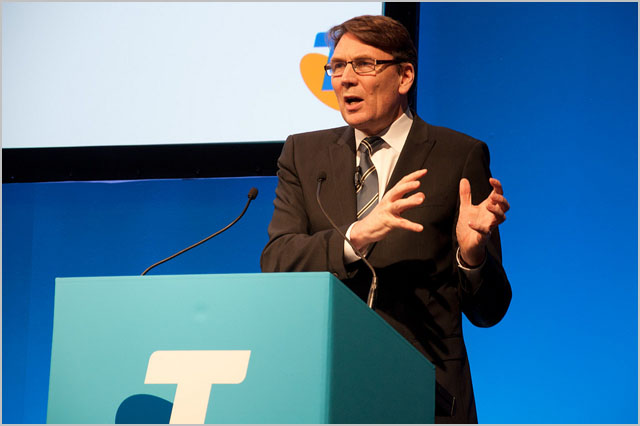 news Six months after it notified customers of its plans, the nation’s largest telco Telstra has finally kicked off a limited and completely voluntary trial of advanced traffic management techniques on its network that will see peer to peer traffic through platforms such as BitTorrent throttled.

In February the telco notified customers that it would be undertaking what it described as “a limited trial of a range of technical solutions for better managing network performance”, with the aim of “maximising the customer experience”. The telco’s director of Consumer Wireline, John Chambers, published a post on the company’s Exchange blog at the time noting that the objective of the trial is to identify options and pricing plans for Telstra customers that would “improve overall customer experience”, to ensure the telco continued to offer “the best quality service at the best possible price”.

However, Chambers’ blog post was met by several dozen responses by customers outraged by Telstra’s decision, and since that time, groups as diverse as the Australian Communications Consumer Action Network and iiNet have severely criticised Telstra over the trial, which raises network neutrality issues similar to those which have been extensively discussed in other countries such as the US.

In a follow-up blog post published today, Chambers noted that the trial would be going ahead in the imminent future. “As part of our ongoing work to test customer experience and preferences, this week we are calling a small number of Victorian Bigpond customers to invite them to participate in a Traffic Management Trial,” the executive wrote.

“This latest trial is focused on how our customers respond when network management techniques are applied in order to manage congestion. Some trial participants will be asked to evaluate how speed differences on non-time sensitive applications, like Bit Torrent, impact their overall customer experience. Participants will be surveyed as to how short-term changes to the network impacted their experience.”

“The trial is limited to Victoria and only a few hundred customers will be able to participate. More details on our general approach in this space are available on previous Telstra Exchange blogs. I would reconfirm that this trial does not involve looking at or recording the content of what customers chose to consume on the internet.”

Chambers noted that he would like to thank all customers who choose to participate in any of our research.

“Traffic on Telstra’s ADSL network has doubled on average every 12 months for the past four years. Your support has meant that we are in a better position to develop services, products, investment strategies and network management policies that help us meet this growth in demand and minimise the impact of internet congestion,” he wrote.

Telstra’s plans have previously attracted the strong interest of regulators such as the Australian Competition and Consumer Commission. In February, for instance, ACCC chairman Rod Sims told the Financial Review that he would look to investigate ISPs such as Telstra if they set up their networks to support their own content against other forms of content, such as video content downloaded through peer to peer platforms.

opinion/analysis
My opinion on this issue is well-known, as I published a commentary piece on it back in January. As I wrote at the time (and nothing has changed, even though I am now a Telstra HFC cable customer), most ISPs already apply some form of traffic control to their networks:

“The difficulty with technology … is that even those systems which we perceive as pure, are actually anything but.

Network neutrality? Don’t make me laugh. Every time you download a packet over virtually any broadband service in Australia, your ISP prioritises it in some way, shape or form. iiNet openly admits its FetchTV service gets priority over everything else on its network (hell, it even requires you to use its own ADSL router to facilitate even greater control by the ISP), Telstra has done the same thing for years and years with its own IPTV services, and I’m 100 percent sure that others such as Optus, TPG and even that God’s Gift to Broadband, Internode, does precisely the same thing. All Telstra revealed last week was a trial that would take that already entrenched that environment just one step further. And it’s even voluntary.”