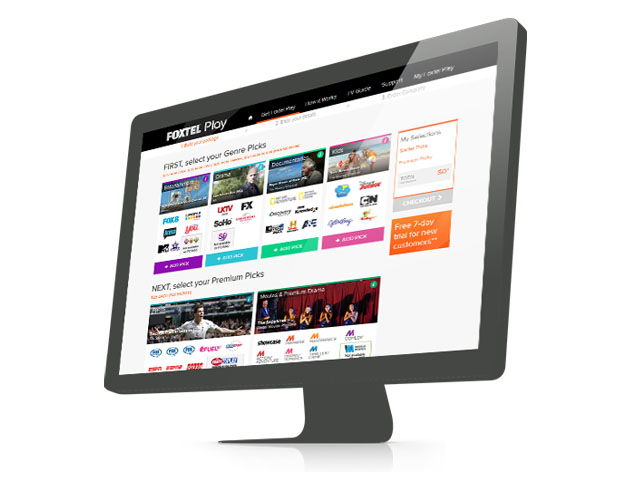 news Pay TV giant Foxtel has launched an Internet streaming version of its service that will allow those with certain smart TVs, gaming consoles or generic personal computers connected to their TVs to access a large chunk of the company’s content through the public Internet, without the normal requirement to have a Foxtel cable or satellite connection.

Dubbed ‘Foxtel Play’, the service went live this morning, although Foxtel is planning an ‘official launch’ on 11 August.

According to a media release issued by the company this morning, the service will initially be availbel to “eligible Samsung Smart TVs, Xbox 360 and PC and Mac computers”, with “eligible LG smart TVs” to be supported soon. It offers customers access to content “as soon as they sign up” and does not feature a lock-in contract or installation costs, unlike Foxtel’s normal cable or satellite television services. Instead, customers are able to subscribe to Play’s various channels on a monthly basis, with prices starting at $25 per month. Foxtel says customers can start or stop their subscription at any time, and Foxtel is offering a free seven day trial for new subscribers.

Foxtel said that “a new flexible package structure” will allow customers to choose from four basic genre-based packages priced at $25 for one topic, $35 for two, $45 for three and $50 for four. Sport and Premium Drama and Movies channels can be purchased for a further $25 each. “This means that a sports or movies enthusiast can now get Foxtel’s comprehensive offering in one of those genres plus a range of additional channels of their choosing in one basic genre-based package for $50 per month or less than $12 per week,” the company said.

Foxtel also noted that its Foxtel Go service will be available to Foxtel Play subscribers as part of their subscription. Customers can access Foxtel Go on up to two registered devices including iPads and selected iPhones and selected Samsung smartphones and tablets. The service is intended as a mobile complement to Foxtel’s existing offerings.

Richard Freudenstein, Foxtel chief executive said: “We’re thrilled to offer Foxtel Play as a new way to introduce more people to our unparalleled programming. Our core set-top box subscribers are already experiencing great features, including Foxtel Go and On Demand.  Now, Foxtel Play gives even more Australians who might not be able to access the core service the freedom and flexibility to enjoy Foxtel across multiple connected devices and at price points to suit different budgets and tastes.”

Jim Rudder, Foxtel executive director of product added, “Foxtel Play broadens our internet TV service and gives customers a Foxtel internet TV offering across a host of devices.  We’ve also had fantastic feedback to Foxtel Go since its launch and have responded by upping the number and type of devices customers can use to access it.”

One of Foxtel’s existing rivals, IPTV and DVD rental company Quickflix, has already responded to the news of Play’s launch. The company issued a statement this morning noting that it was confident that “it remains a better quality and better value proposition for movie and TV lovers than the new arrival”.

Quickflix chief executive Stephen Langsford said: “Foxtel’s entry into the market is acknowledgement by a major industry player that there is consumer demand for “over the top” internet delivered services at a lower price point than expensive traditional payTV requiring a set top box and long-term contract.”

“Foxtel’s entry will assist in building consumer awareness of the streaming category and that in turn will assist demand for all services in the category, including Quickflix. We also welcome competition. We have a great competitive offer but we have to keep on working hard innovating and improving the service as we go”.

Quickflix’s statement also included a range of criticisms of the Play service. It noted that Foxtel’s service started at $25 per month for a basic package, while Quickflix’s entry level cost was $14.99. That cost gives Quickflix subscribers access to unlimited Internet streaming options, but also includes a one-DVD-at-a-time subscription to the company’s extensive DVD rental library.

In addition, Quickflix stated that Play’s $25 package did not appear to be a simple “all you can eat” offering. unlike its own. “The customer must limit their selection to various genres, which goes against customer’s viewing habits,” said Quickflix. “Furthermore the ‘Foxtel Play’ $25 package is for the basic Foxtel package with additional package selections at $35 – $50 per month.”

In contrast, Quickflix said its service was simple. “For $14.99 consumers can choose from over 60,000 of the latest release and classic movie and TV DVD and Blu-ray titles, stream a range of movie and TV series including some of the best of HBO,” the company said. “For a few dollars more they can also stream latest release movies and current season’s TV through Quickflix or just access content this way without the need for a subscription at all.”

There are also technical differences between the two services. Quickflix stated in its release: “Quickflix also believes access is important, and that’s why it offers customers the widest possible access of any streaming service in the market, across Smart TVs like Samsung, Panasonic and Sony, game consoles like Xbox and PS3 and a host of mobile and tablet devices.”

opinion/analysis
I haven’t really checked out Play in any depth, but what I will say initially is that it appears to represent something close of a straight port of Foxtel’s existing subscription television service across to IPTV. It should be obvious by now that this isn’t really what customers want — if that’s what they wanted, then they probably would have already subscribed to Foxtel’s infrastructure-based platform. Some customers want a smorgasboard, but what the evolving generation of younger customers want — and bear in mind when I say “younger”, what I’m really talking about is the generation of people below about 45 — is on-demand content. They don’t want a category of sci-fi/fantasy television shows, they want Game of Thrones. They don’t want a sport category. They want the English Premier League specifically. And so on.

Offsetting this, of course, is the cost of your broadband package. Foxtel can afford to cut the price of Play a little — because it’s not actually delivering the content; your ISP is. And unlike with similar service FetchTV, Foxtel doesn’t appear to have cut deals with the major ISPs to take into account the cost of quota. The result is that you’ll need to watch your data usage when using the service.

Let me say this for now: The jury is still out on Play. It delivers a fairly standard Foxtel service over a different platform, and for a lesser cost. But do people still want Foxtel? Personally, I don’t think so; certainly I see no need for it in our family’s viewing habits. But there may be areas where they will. Sport, for example. It’ll be interesting to see what the uptake will be like on Play. I’m predicting it will be minimal. But then, I’m often wrong ;)