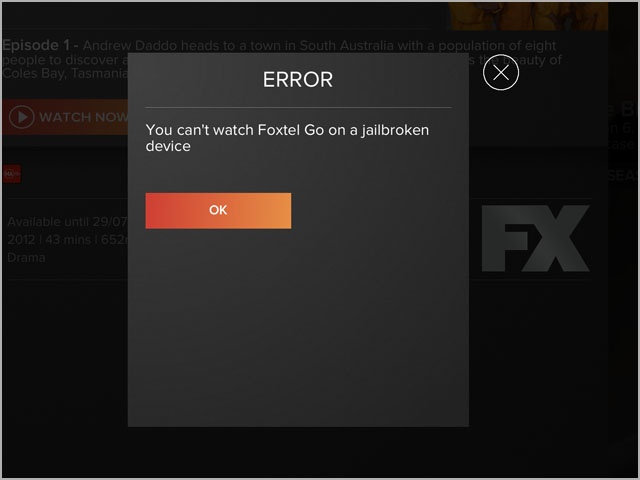 In a media release issued yesterday, Foxtel revealed that it had finally launched its Go app — which allows Foxtel subscribers to access content when they’re away from their primary cable connection — across what it describes as a “host of new devices” — including what it said were “select” Samsung Android smartphones and tablets, as well as PC and Mac computers. Simultaneously, the company said it had upped the number of devices that customers could register to use Foxtel Go, from two to three. Foxtel Go was already available for Apple’s iOS devices, including the iPhone, iPad and iPod Touch.

Jim Rudder, Foxtel Executive Director of Product said: “we’re really pleased with the response we’ve had since Foxtel Go launched late last year. Through our innovation, Foxtel continues to add value for our subscribers and the increase in the number and type of devices consumers can use to access it goes a long way towards delivering on our promise to help even more customers enjoy Foxtel in the home or on the move.”

However, it immediately became apparent that the company’s pledge to bring Foxtel Go to Android devices was not as comprehensive as some had assumed. In the fine print associated with Foxtel’s media release on the issue, the company noted that its Android app would only run on a very limited set of devices — and all from Samsung: The Galaxy S III, the Galaxy Note II or the Galaxy Note 10.1. In addition, customers will not be able to download the Foxtel Go app through Google’s Play store, but instead only through Samsung’s own Apps store, which is little used by Android users.

The move immediately locks out users of other Android devices from using Foxtel Go, including customers of brands popular in Australia, including HTC, as well as other less-popular brands such as Sony, LG, Samsung, ASUS, Huawei and others. And it also locks many Samsung users out of using the app — including even those using the company’s new Galaxy S4 handset, currently one of the top-selling smartphones in Australia. Foxtel’s move also locks those using some of the most popular Android tablets — Google’s Nexus 7 and 10 models — out of its content ecosystem.

Android-focused websites such as AusDroid have immediately posted workarounds for the issue, but it is unclear to what extent Foxtel will be able to block these kinds of technical fixes on its end.

Simultaneously, it has become apparent that Foxtel has also blocked Australian customers using jailbroken iOS devices from accessing Foxtel Go. Many Australians jailbreak their smartphones or tablets in an effort to gain additional functionality which Apple and other manufacturers have blocked customers from using. The practice of jailbreaking is common in Australia, although it is unclear how legal it is.

“Foxtel has just blocked access to its Foxtel Go service on Jailbroken iOS devices,” an anonymous tipster wrote in an email to Delimiter overnight. The tipster included the above screenshot of what had occurred when they had tried to watch Foxtel on their smartphone. “There was no warning of this. It just happened with the latest update, 1.7. This is a mandatory update too. You can’t run an older version; it just tells you to update if you do.”

Foxtel has posted a comment on Facebook about the issue, stating: “Foxtel Go on jailbroken phones has been restricted to ensure our content, and that of our channel partners, has the best protection.” However, the company is currently fielding a number of complaints about the issue on its Facebook channel.

The news comes as Foxtel has recently pledged to open up its next generation of services to more customers, with the company’s chief executive Richard Freudenstein giving a major speech in March this year pledging to realign the company’s operations to better meet the needs of young people and those who are used to different models of accessing content via the open Internet.

However, the company has also taken other steps recently to lock down content online. In mid-May, Foxtel confirmed reports that it will block the remaining seasons of HBO’s popular Game of Thrones series from being offered in Australia hours after the show is released in the US, due to an exclusive deal with the show’s producer HBO signed in October last year.

The deal effectively means that the immediately concluded season 3 of Game of Thrones, as well as the most recent season of the similarly popular vampire drama True Blood — will be the last that will be available in Australia in a timely fashion through IPTV platforms such as iTunes, for individual purchase hours after each episode of the shows air in the US. Fans will eventually still be able to buy the shows online — but only after each season has finished, with Foxtel having a local monopoly on timely viewing of each episode.

A Foxtel spokesperson did not return calls yesterday or today inquiring about the issues raised in this article.

opinion/analysis
Reading between the lines here, it seems as though there’s a couple of things going on.

Firstly, it seems like that Foxtel and Samsung have organised some kind of marketing deal that will involve Samsung paying Foxtel fat sacks of cash money to ensure that Foxtel’s Go app is only available, at least in the short-term, through Samsung’s mobile platforms, and not through competing Android companies. The timing is also suspicious, as this morning Samsung held a launch event in Sydney to launch its newest range of Galaxy Tab 3 tablets. Was Foxtel at the event pushing an exclusive deal with Samsung? I wasn’t there, so I’m not sure, but the possibility exists.

However, there is also the disturbing fact that, despite the Samsung exclusivity arrangement, Foxtel has not been able to make Foxtel Go available on Samsung’s current premiere smartphone, the Galaxy S4.

From my perspective, this is just weird. There really is not that much hardware difference between the SIII and the S4 — any app that can run on one, should be able to run on the other. And you’d even expect, given its solid specs, that Foxtel Go would be able to run on Samsung’s previous best-seller, the Galaxy S II.

What this points to is the suspicion that Foxtel’s development team is incompetent, and that its Android app is so flakey that the company has not been able to get it running on Android devices outside certain specific scenarios. Given the complex software involved in a quality IPTV streaming service such as Foxtel Go provides, we can’t say we’re surprised. However, this is a little bit of an indictment on Foxtel’s development capabilities.

In general, of course, the situation just sux for almost everyone. Apple iOS users can’t jailbreak their devices for some ridiculous Foxtel lockdown reason (probably related to the ability of jailbroken devices to stream content to a TV screen, outside of Apple’s own copy protection schemas). Android users can get the Foxtel Go app, but only if they do so illicitly, via the AusDroid method or similar, or if they want to use it legitimately, they have to have one of only three Samsung devices.

All this, for a service which Foxtel customers are already paying up to $100 or more for, per month. Well, let me repeat my comments when Foxtel locked down Game of Thrones: “What. A. Big. Fat. Fucking. Joke. Screw you, Foxtel.” Get off your high horse and start doing a better job of actually serving your paying customers. Then you might not have such a terrible reputation amongst Australians who would otherwise be interested in purchasing your overpriced services.