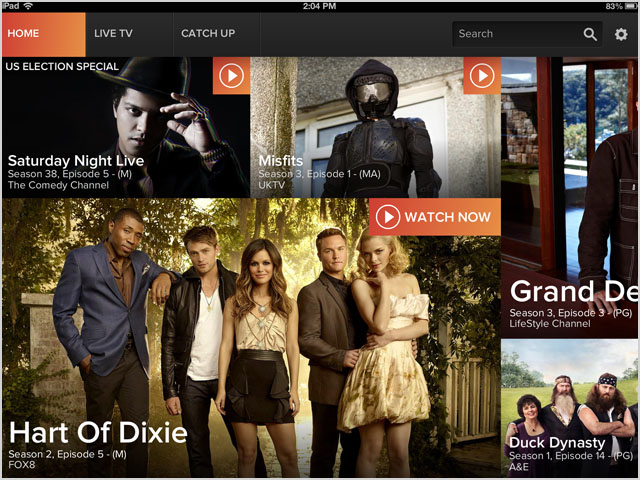 analysis Most of Australia’s younger generation of Internet-focused media consumers probably think Pay TV giant Foxtel is merely a blast from the past; a mouldering old dinosaur with no tricks left up its sleeve. But if revelations by the company last week are any indication, Foxtel ‘gets’ the Internet and has exactly the right moves planned to tackle it.

Right now, if you want to consume any of Foxtel’s services (the pay TV giant is well-known for its strengths in complete sports broadcasting, but also holds the local rights to a number of major US television shows such as Game of Thrones and the Comedy Channel), you have very limited options to do so. Ideally, you’ll get a HFC cable connection from Telstra that will allow you to connect to the company’s network. There’s also satellite, and Foxtel has recently opened up its content slightly to those with Telstra’s T-Box or Microsoft’s Xbox 360 platforms, but in general it’s all still locked down; only on certain platforms or certain networks.

But several announcements made last week by Foxtel chief executive Richard Freudenstein have the potential to change all of that — and in short order.

The most high-profile move which Foxtel will take, from June this year, will be to allow customers using any platform on any fixed-line broadband or 3G/4G mobile connection, to access its content on a subscription basis. It’s called Foxtel Play (see the full media release here in PDF format), and for those who have been locked out of Foxtel’s content up until now for one reason or another, it’s pretty much content nirvana.

Even better, the service comes with no lock-in contracts of the type which Foxtel has historically preferred, and it’ll feature what appears to be most of Foxtel’s content: 40 channels and more than 2,000 video on demand titles. An associated movie on demand service is also slated to launch later this year.

In a speech last week to the ASTRA (Subscription Television Australia) conference (see the full speech here in Word format), Freudenstein had this to say about Foxtel Play: “Ideally, once they have sampled Foxtel Play, customers will realise how great the service is and sign up to the full Foxtel product … this represents an opportunity to introduce Foxtel to a whole new customer segment.”

We couldn’t agree more. The audience for Foxtel Play, which we anticipate will demonstrate great interest in the service, is pretty clear: Young people such as myself who have never felt any great interest in Foxtel previously because of its restrictive nature and the fact that it just hasn’t run on the platforms which we like to consume our media on. And when I say ‘young’, what I really mean is anyone around the age of 30 or below — so actually not that young.

Freudenstein is clearly hoping that that audience will experiment with Play and then move onto the full Foxtel experience; however my prediction is that those who do like Play will merely ignore the full Foxtel world and just continue to use Play however they like, wherever and whenever they like.

Now, the development of Play and its associated movies on demand service is revolution enough for Foxtel. The result of what must have been a sustained development effort, it takes Foxtel and its clutch of content directly to the doors of the new Internet generation and by itself shows the company isn’t as much of a stick in the mud as many people might have believed. However, it’s far from being the only thing which the Pay TV giant has up its sleeve.

In the same speech last week, Freudenstein outlined a range of other technological initiatives which Foxtel has been working on to please the Internet generation.

One of those is an enhancement to Foxtel’s electronic program guide which will enable Australins to go back in time to watch or record programs they’ve missed; after they’ve aired. “So if you are at work and hear about that great program you missed last night, you can go home, go back in time and watch it,” said Freudenstein. “This is a perfect example of a seamless combination of broadcast and broadband to create a better viewing experience.”

Foxtel has also organised a deal with social television company zeebox, which will allow Foxtel users to connect with others watching the same programs at the same time. This kind of social interaction connected with television watching is becoming increasingly popular as smartphones and tablets are making their way into loungerooms, functioning as second screens for ancillary information delivered alongside traditional television programming.

Then there’s the iQ3 set-top box which Foxtel is working on. Freudenstein told the ASTRA conference that the device will have ten times the processing power and eight times more memory than its current box, with eight satellite or cable TV tuners built in, and in the satellite version, two terrestrial tuners.

“With today’s iQHD you can watch one program while recording two others,” said Freudenstein. “The new iQ3 will allow you to watch one show while you record up to four others. Foxtel’s iQ3 will have capacity for a one terabyte hard drive. It will use the latest generation WiFi technology to enable easy connectivity to the customer’s gateway router. The inclusion of Bluetooth technology will also allow us to support the latest remote control devices.”

But this still isn’t all.

Freudenstein also noted that Foxtel was actively considering launching a so-called ‘triple play’ service, consisting of video, broadband and voice telephony. To a certain extent it already does this through its partnership with its part-owner Telstra, but its own branded service would take the concept further and particularly make sense as the National Broadband Network continues to roll out around Australia and Telstra loses its HFC cable network advantages.

“Indeed, Telstra’s CEO David Thodey has publicly indicated support for the idea of a Foxtel triple play,” said Freudenstein. “While I’m not in a position to make an announcement today I can confirm that it is under active consideration. We believe that a triple play offering makes a lot of sense for our business and our customers as can be seen from the success of other subscription broadcasters which have adopted this model around the world. Together with iQ3, it would place Foxtel firmly at the centre of the broadband connected home.”

And even when it comes to the timely importing of international content, Foxtel is conscious of the needs of the demands of the Australian audience, who have complained bitterly about the delay in the local availability of flagship shows such as HBO’s Game of Thrones.

“We realise that in a connected world everyone expects delivery of content to be simultaneous and seamless, no matter where you are,” said Freudenstein. “Our subscribers can join global conversations about Game of Thrones, Mad Men, The Carrie Diaries, Revolution, The Walking Dead, Boardwalk Empire and so many more, because we show them immediately after they have gone to air in their home markets.”

Not everything Freudenstein said last week was positive. In particular, many Australians will have been angered by the widely reported comments he made about the need for the Government to crack down on Internet piracy. Research has shown that Australians are some of the most prolific pirates of popular shows such as Game of Thrones — because they haven’t always been made available locally in a timely fashion.

“We will be calling on both the Government and Opposition to develop policies that protect copyright owners and ensure the viability of the content creation industries,” said Freudenstein.

However, in general the Foxtel chief executive’s message was overwhelmingly positive. At the moment, on almost every front possible, the pay TV giant which many had long ago consigned to restrictive, lock-in obsolescence appears to be fighting to make its content available everywhere, to every platform, and through methods which the next generation of Internet consumers approve of.

None of this is to say that Foxtel is guaranteed to succeed with its new generation of Internet-connected initiatives. Probably the company’s biggest challenger in the Australian market (given the fact that Quickflix continues to suffer from financial problems at the moment) is likely to be FetchTV, which produces a set-top box IPTV/PVR and video on demand platform now integrated with sizable ISPs iiNet, Adam Internet and Optus.

FetchTV recently launched the second generation of its set-top boxes, which have been completely revamped, with a new physical design and a large amount of new features (in fact, in our demonstration several weeks ago, we found it hard to think of a feature the new FetchTV boxes didn’t have). Over the next week we’ll evaluate FetchTV’s new service in a comprehensive review, and we think readers will very much like what we have to say about the platform.

However, with Freudenstein’s revelations last week, Foxtel revealed that it’s not simply going to lose its grip on the Australian content market to challengers such as FetchTV without a fight. The company appears to have placed its bets in all the right areas, and Freudenstein and his team clearly understand the emerging IPTV/video on demand space very well and how the Internet is changing everything. This is great news: Australian consumers can only benefit.