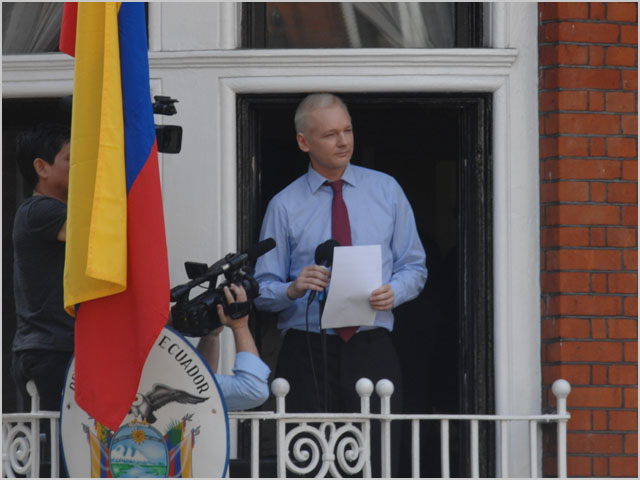 This article is by Jane Andrew, associate professor, and Max Baker, lecturer, both at the University of Sydney Business School It first appeared on The Conversation and is replicated here with permission.

analysis Julian Assange’s WikiLeaks Party is gathering momentum ahead of this year’s federal election. Prominent barrister and political figure Greg Barns has been announced as the party’s national campaign director, while it has secured a Melbourne-based headquarters and attracted donations of up to A$100,000.

But what could a man like Julian Assange achieve within the orthodox structures of parliament?

When Professor John Keane spent the day with Assange recently, Assange briefly discussed his plans to run for the Senate. He predicts that if successful, the US will drop its grand jury espionage investigation in order to avoid a diplomatic row. He might still be extradited to Sweden, but winning a Senate seat in September could secure his freedom from the Ecuadorian Embassy in London. It is probably his best chance.

Through WikiLeaks, Assange built his reputation as an outsider, using technologically enabled anonymous leaks to “speak truth to power”. But as a senator, Assange will find himself working within formal democratic structures. For many, this will make him an insider, privy to the world he has sought to expose. There is no certainty that Assange’s presence in the Senate would improve public accountability, but the presence of his radical ideas in our highest political forum will force us all to have a conversation about what we think we should and shouldn’t know.

To function effectively, Assange will need alliances. He will need to make trade-offs and build relationships, especially if he wants to make his political agenda “real” through legislative change. But in the context of the Senate, the WikiLeaks Party’s commitment to openness through radical transparency could isolate them from other senators who are fearful of betrayed confidences. If they are isolated, the functional benefits of the WikiLeaks Party within Senate may be limited.

This may not prove to be a problem. Assange may have no intention of working as a traditional senator, even one from a minor party. If he intends to maintain his status as an outsider, uncontaminated by associations with other politicians, he may still prove effective. As a senator with an international profile, he could use his position to solicit public sector and parliamentary leaks and promote the benefits of transparent and open government. As a result, Australians may be keener than ever to blow the whistle on organisational behaviour.

In fact, we may all be better served if Assange refuses deals and focuses on what he does best – high profile whistleblowing. This would allow him the freedom to continue his work at WikiLeaks, free from exile. It would also sustain his identity as an agitator, unsatisfied with emergent forms of transparency that are dictated by government and corporate power.

But it would be wise for the electorate to consider whether the work of Assange should be advanced in Senate. It is not our job to elect him in order to free him. He needs a clear political platform.

On this, we’ve still heard little from Assange. All he has really said is that the WikiLeaks Party will demonstrate “ideological unity” around a collective belief in public accountability mobilised by radical forms of transparency.

To this aim, he intends to allow constituents to have a direct say in the policy decision-making process through a Wikipedia style website. This could prove an exciting new experiment in participatory democracy and if successful may silence those who have criticised “the one man Julian Assange show”.

Interestingly, Professor Keane flinched when Assange mentioned an ideological commitment to perfect transparency – even the most hyper-democratic arrangements need some privacy in order to manage sensitivities in the governing process. In addition, much political negotiation happens in private in order to speed up the business of government.

It also should be recognised that as an ideology, “transparency” only describes half of the process – it is only the revelation. Once wrongdoing is exposed, we still need action to produce meaningful change. Transparency in itself is not enough. It is one thing to reveal truths and another to act on them.

Prior to Assange’s arrest, the survival of WikiLeaks depended on its organisational form. The work of WikiLeaks could be picked up at a moment’s notice and reassembled anywhere. This mobility allowed Assange to meet with various informants, reporters and to spread his vision of a world “laid bare” by WikiLeaks. It was both untethered and tiring work.

Assange may now be tethered inside the Ecuadorian Embassy in London, but he remains tireless, his attention now turned to the federal election in September. Members of the WikiLeaks Party now need to articulate their political platform and give Victorians a reason to vote for them – and this needs to be a vote for more than Assange’s freedom.

The authors do not work for, consult to, own shares in or receive funding from any company or organisation that would benefit from this article. They also have no relevant affiliations. This article was originally published at The Conversation. Read the original article. Image credit: Snapperjack, Creative Commons