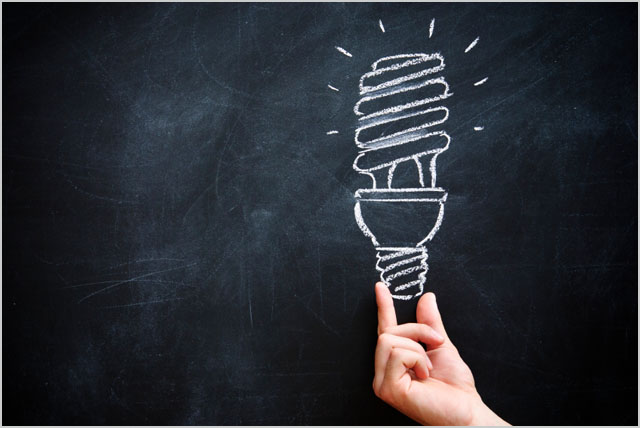 news The National Australia Bank has published a detailed white paper revealing how it used a combination of engineering and information technology tools and processes such as infrastructure on demand to achieve carbon neutrality and push beyond this benchmark into even greater heights of environmental efficiency.

The white paper (available online in PDF format) was published last week by the Open Data Center Alliance, a coalition of organisations ranging from banks such as NAB to hotel chains like Marriott and even manufacturers like BMW which came together in 2010 to deliver a unified voice for what it describes as “emerging datacentre and cloud computing requirements”. News of the white paper was first published by The Register.

In the whitepaper, NAB reveals that it first launched its in-house carbon neutrality in 2007, with the aim of meeting that goal in 2010. In its efforts to meet that goal, the bank’s first steps involved investing in over 350 energy efficiency and emission reduction projects across its Australian operations, with individual projects ranging from heating, cooling and lighting adjustments to major refurbishments of office buildings, the automatic switch-off of PCs not in use, and the design and installation of a tri-generation power plant.

The tri-generation plant alone appears to have had a significant impact on NAB’s operations. This type of infrastructure features the simultaneous generation of electricity and usable heating and cooling byproducts from fuel combustion (in NAB’s case, natural gas). The heat supply powers a generator, which in turn produces “low-temperature” waste heat which is suitable for both heading and cooling datacentres. 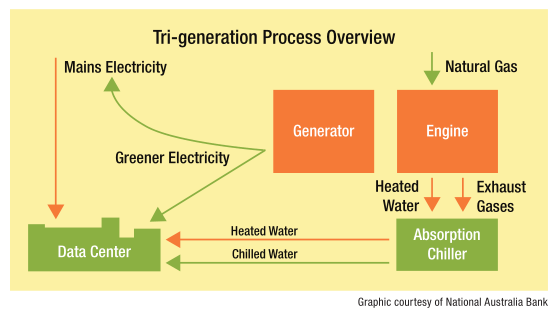 In NAB’s case, the tri-generation facility supplies one of the bank’s strategic datacentres with over 60 percent of its total energy requirements, helping to reduce carbon emissions by about 20,000 tonnes per year — accounting for a 10 percent reduction in the bank’s overall Australian carbon footprint and also saving the bank money through energy efficiency.

However, the bank has also made a number of major changes to the way it uses underlying IT infrastructure, which continue to have an impact on its energy footprint.

For example, the whitepaper states that NAB’s internal transformation program is seeing it rebuild “its entire platform” using an infrastructure on demand/internal private cloud model to maximise its overall efficiency and relieve the growing demand on its two main datacentres.

The bank has partnered with vendors Digital Realty Trust and IBM to design and build a new strategic datacentre based on modern technology, with the aim of retiring its oldest datacentre. The primary driver for the construction of the new facility is to provide the compute capacity the bank needs, while also reducing NAB’s overall carbon footprint.

NAB is currently outsourcing the management of most of its physical datacentre infrastructure to IBM — freeing up the bank to focus on its “core work” and allowing IBM to focus on its own core competencies. “IBM is now responsible for the hardware within NAB’s two existing datacentres,” the white paper states, “and for implementing IBM’s ‘infrastructure on demand’ platform model. IBM will also manage the new facility.

The bank is now purchasing what it describes as “resource units” from IBM — scaling its processing needs up or down on demand. This has allowed NAB to reduce its carbon footprint further — and there’s also incentive for IBM to continue to be more efficient and reduce its own costs.

Other consolidation efforts are also under way. Over time, NAB has added about 30 smaller datacentres (or ‘computer rooms’) around Australia, as its technology needs have grown. However, the bank is planning to consolidate and retire these smaller rooms into its larger strategic datacentres, ensuring that its processing is being done as efficiently as possible. Many of these facilities will be brought under the wing of the new, modern datacentre the bank is constructing with IBM and Digital Realty Trust.

“The new facility will be ready to run a pilot of the new “Infrastructure on Demand” platform by July 2013. It is targeted to have fully migrated functionality by September 2014,” the bank’s white paper states.

Tim Palmer, Senior Manager, Data Centre Transformation at NAB, adds: There are over 2,000 servers across the data centers that will be consolidated, with approximately 10,000 operating system instances handling the functionality, all of which need to be migrated to the new facility. Ultimately, as we go through this migration, our standard principle is that everything is virtual, by default. We want to minimize as much as possible bringing any old technology over to the new facility.” The bank has already virtualised some 2,000 operating system instances since January 2011, as it attempts to grow the density of its datacentres through virtualisation.

Some other examples of moves the bank has taken to improve its energy effiency include increasing the ability for its staff to use videoconferencing (which has allowed it to decrease the amount of business travel it does), implementing double-sided printing by default, and establishing a process in which staff members must swipe their ID card at a printer before they can pick up a print job — greatly reducing the amount of paper wasted due to pages that are printed but never actually picked up.

Future moves may include further decommissioning of old systems as NAB’s technology transformation continues; continuing to push for higher use of server virtualisation; decreasing the number of development and test instances (using shared virtual instances instead) and decreasing the number of full copies of databases used for testing purposes (and using subsets of data for specific tasks instead).

opinion/analysis
I couldn’t include all of the detail from NAB’s white paper in this article, so I recommend that you go and check it out for yourself if you’re interested. It’s only half a dozen pages, but it does constitute a pretty comprehensive overview of the sorts of things you should be looking at from an IT perspective if you want to push your organisation towards carbon neutrality (and get in good with your chief executive and chief financial officers along the way).

It is highly laudable for NAB to make this information publicly available. This is the kind of detailed case study which will help many in the IT industry look at their own operations and consider energy efficiency. I am sure it will be read quite widely over the next year.

The white paper also gives us further information to illustrate just how profound the IT transformation is that is going on inside NAB at the moment. This isn’t just an IT infrastructure transformation — the bank is literally changing and upgrading almost every single aspect of its technology platforms, in the kind of change we only see once every decade or so. If you are interested in this, I recommend checking out these two articles (here and here) on the changes — they are quite profound.