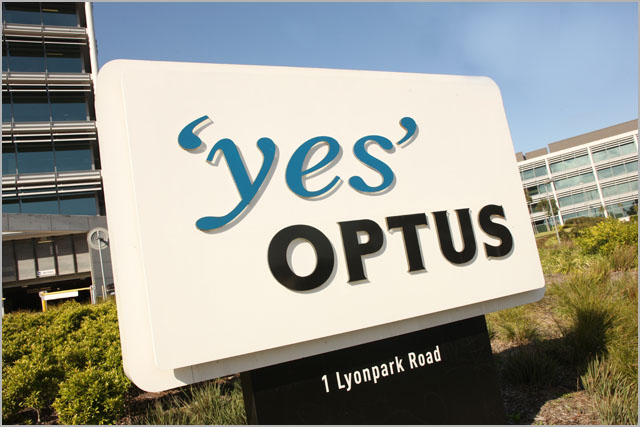 news The nation’s number two telco Optus has revealed it has already upgraded some 500 mobile phone towers across Australia to support high-speed 4G mobile broadband services, in a rapid-fire rollout aimed at curtailing Telstra’s lead in the provision of the next-general mobile services.

In a wide-ranging briefing yesterday, Optus also noted it had started selling commercial 4G services on its new network to business customers in Sydney and Perth, following successful trials of the network in Newcastle over the past few months involving around a thousand customers. The company has also rolled out its 4G network in Melbourne but hasn’t yet started allowing customers to use it, as it is still finalising a spectrum re-farming exercise in that city.

The news marks a faster than expected 4G rollout for Optus. In late May, Telstra — the only other carrier to have deployed 4G services in Australia, with Vodafone not having rolled out its own 4G infrastructure yet — revealed it had switched on its 1000th 4G site. Optus’ own rollout has been less high-profile than Telstra’s, but also now boasts significant 4G coverage in many of Australia’s capital cities. It will hit more than 600 sites by the end of August.

Speaking at the briefing, Optus’ managing director of its networks division, Gunther Ottendorfer, said the company’s coverage extended for between 10 and 30 kilometres around each capital city’s central business district — ranging from Linfield in Sydney’s North, for example, to Botany Bay in the South, and from Rose Bay to Newington. Complete coverage maps can be found at the bottom of this article.

The network has been constructed using equipment from several different network vendors, with gear from Nokia Siemens Networks being used in Sydney and Perth and Chinese vendor Huawei getting the nod in Newcastle and Melbourne.

The company will give customers three options for signing up to its 4G network, with $34.95, $54.95 and $74.95 monthly including 10GB, 15GB and 20GB of usage quota respectively. Excess usage will be charged at 10c per megabyte. Optus currently has two 4G access devices available manufactured by Huawei, a 4G USB modem and a separate 4G Wi-Fi modem which can share a 4G connection between five connections via 802.11 Wi-Fi. Each can be bought for an additional monthly charge on a one or two year contract with Optus. 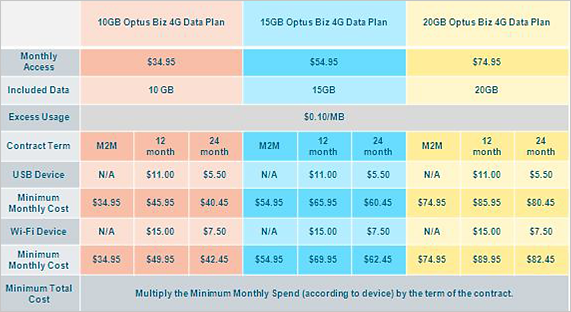 Unlike Telstra, which currently has a handful of 4G handsets available from vendors such as HTC and Samsung, Optus is not currently selling any 4G-capable smartphones, but it expects to reveal its planned handset range when it launches full consumer services on its 4G network shortly. “Building on our first 4G services in Newcastle earlier this year, business customers in Sydney and Perth can now get faster speeds, greater capacity and quicker response times on their 4G mobile broadband services — ahead of our wider consumer 4G launch,” said Ottendorfer yesterday.

Wider network upgrades
However, the 4G rollout isn’t the only network upgrade which Optus has been working on. The company also revealed yesterday that it had upgraded more than 1,000 mobile towers to use the 900MHz spectrum, in a move which the company said had resulted in stronger 3G performance for Optus customers across regional centres and major capital cities. The move is particularly designed to give customers better coverage indoors.

““Our customers are making the most of these network enhancements with a 20 per cent increase in 3G data usage in our upgraded areas,” said Ottendorfer. “In addition to our popular 3G HomeZone product, Optus has significantly strengthened its 3G metro indoor coverage footprint, ensuring our customers receive the highest quality coverage in the places that matter most to them.”

“Over the next twelve months, Optus will continue to roll out 3G coverage enhancements to the remainder of the network including Brisbane, Newcastle, Wollongong and Adelaide. Our intention to build the best mobile network in Australia relies on having a strong foundation in 3G, while transitioning into a 4G world.”

In addition, the company is also trialling a different 4G network standard, TD-LTE, in its campus in Sydney’s Macquarie Park, as well as in St Marys in Western Sydney. Optus believes the TD-LTE standard will allow it to deliver even higher capacity services to customers, as opposed to the FD-LTE standard which its current 4G network uses. It will use the spectrum acquired through its recent purchase of wireless telco vividwireless to fuel the rollout, and sell devices to customers capable of accessing both 4G standards.

In a live trial demonstration to media yesterday, the TD-LTE service delivered “peak site throughput capacity of over 200Mbps and a consistent per user range of speeds between 25Mbps and 87Mbps”, according to Optus significantly outperforming the company’s current 4G network in a side by side trial. Optus’ current 4G infrastructure is capable of peak speeds up to 60Mbps, although testing accounts currently vary as to how consistent the experience is.

Most tests have shown Telstra’s 4G network capable of speeds up to around 35Mbps, but Ottendorfer wasn’t willing yesterday to make a categorical statement putting Optus’ speeds ahead of Telstra. “A lot of things influence the performance of the network,” he said. But he added that with Optus’ plans, the company “certainly will have the opportunity to have the leading network”.

opinion/analysis
I’ve been pretty tough on Optus over the past year, slamming it for not having enough vision and not executing well on its plans. In addition, the company has been experiencing only modest growth in its mobile division, at a time when Telstra has been adding on some 900,000 new mobile connections every six months. However, what I saw yesterday was a company which does have a strong vision for where it is taking its mobile network, and if the company can move fast enough, it does have the opportunity to at least provide a highly competitive 4G network to Telstra’s or even go one better.

Although Ottendorfer wouldn’t say it in yesterday’s briefing, it seems reasonably clear at the moment that the theoretical performance of Optus’ 4G network currently has the potential to exceed that of Telstra’s — delivering what appears to be better speeds. Of course, as the executive noted, there are a large number of factors which go into the performance of a wireless network — for example, the availability of backhaul fibre to mobile towers — and it’s much to early to call a winner yet.

It is also true that Telstra already has several hundred thousand 4G customers on its network, while Optus has almost none. It will be interesting to see whether Optus’ 4G network starts to experiences congestion as more and more customers are added to it — as we’ve already seen with the various 3G networks. So far, Telstra’s 4G network doesn’t appear to have suffered this problem.

But on current grounds, and with the long-term TDD-LTE plans being developed, there is a heap to feel positive about right now if you’re an Optus mobile customer or thinking of becoming one. The company is truly amping up its challenge to Telstra, and if Optus can significantly undercut Telstra from a pricing perspective and offer a decent range of end user equipment, the big T may have a huge fight on its hands in the next several years for 4G customers.

Of course, none of this is good news for the ailing Vodafone, which is far, far behind both Telstra and Optus when it comes to the development of its 4G services, and still losing hundreds of thousands of customers every year. I was at several technology industry events yesterday, and much of the conversations I had with people revolved around the issue of whether Vodafone will continue to exist as a viable independent entity in the next few years. Australia’s mobile sector is increasingly looking like a two horse race.