This article is by Bill Morrow, the chief executive of Vodafone Australia (pictured, right). It first appeared in the Australian Financial Review newspaper and is replicated here with permission.

opinion A fundamental part of being human is the desire to communicate, express emotions, and exchange ideas. Telecommunications companies like Vodafone help facilitate this universal need to connect.

Over the last 20 years, there has been a remarkable reshaping of telecommunications. We have moved from fixed-line telephones and analogue mobiles, through to next generation broadband, smartphones, tablets and the connected home. This telecommunications revolution has transformed our society and economy. And it is clear that there is more to come. Consumers want to take advantage of the online world and this will drive the modernisation of our economy. The increased demand for bandwidth will require greater innovation and investment from the telecommunications industry. 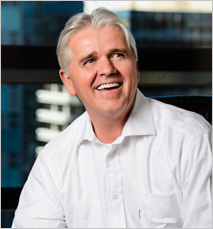 The Government’s commitment to the National Broadband Network (NBN) is a high-profile policy response to the exponential growth in demand for bandwidth and the need to transform our telecommunications market. With the NBN, Australia is well-placed to take the next step in developing an advanced and productive digital economy. However, to take full advantage of the opportunities of the NBN, policy makers need to remain focused on establishing the right competitive framework.

The policy and regulatory decisions we make in the next few years will be crucial for Australia’s long- term success.

It is important to recognise that, as well as improving fixed-line broadband, the NBN will play an important role in enhancing mobile performance. To continue to improve wireless networks we need to build smaller and smarter ‘cells’ and use fibre to carry the traffic to the wider world. Just like the tablets and smartphones of today, we expect virtually all future devices will connect wirelessly, to both fixed and wireless networks, offering consumers a seamless telecommunications experience. Because of this, the future of telecommunications will be the convergence of mobile technology with next generation fixed networks, where wireless and fibre services are fundamental and essential complements.

The NBN will not only upgrade our fixed and mobile broadband infrastructure, it will also transform the competitive landscape of Australian communications. For 15 years, Australian policy makers tolerated a market structure that allowed Telstra to establish itself as the most vertically integrated telco in the world. No other jurisdiction allowed a company to have Telstra’s level of market dominance in fixed, mobile, and cable network infrastructure and to own half of the largest pay TV company.

This anti-competitive playing field has undermined the incentive for the broader telecommunications market to invest, resulting in less choice for consumers and a lack of innovation. Outside the capital cities there is virtually no fixed-line competition and mobile competition in regional areas has been hamstrung by Telstra’s regional backhaul dominance.

The current Government has initiated essential reforms that will start to overcome these serious structural problems. The wholesale-only focus of NBN Co and the structural separation of Telstra are crucial building blocks for a sustainable competitive industry. These reforms were vital elements of Vodafone’s decision to begin trialling NBN services, but more needs to be done.

However, challenges continue. The transition to the NBN and the move to next generation mobile infrastructure must be carefully managed over the next decade. While the NBN has dealt with the enduring problem of Telstra’s ownership of the ‘last mile’ copper network limiting the modernisation of infrastructure, there is still more work to be done to ensure existing structural problems do not become entrenched.

The changing nature of the telecommunications market does not require a change in policy frameworks, but it will require a change in regulatory focus. Traditionally, regulators have treated ‘fixed’ and ‘mobile’ as separate markets. Regulatory assessments have not acknowledged that Telstra’s dominance in fixed telephony has significant impacts on the mobile industry. In a converging world this siloed approach is no longer tenable.

We need an urgent reassessment of the regulatory approach to the telecommunications industry. Without careful attention, this disproportionate market dominance could continue after the migration to the NBN. For consumers to benefit from the opportunities of a converged telecommunications market, the Government must continue to take action to overcome key market failures and redress the serious imbalances in the Australian competitive landscape.