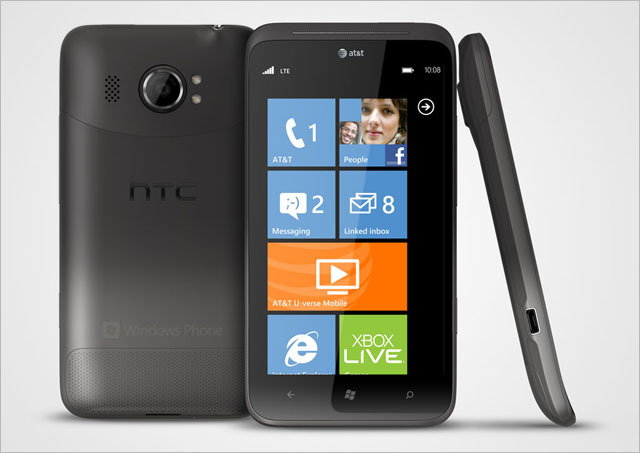 news As expected, Telstra today launched its first smartphone running Microsoft’s Windows Phone 7 operating system that is capable of 4G speeds, with the model being a 4G version of HTC’s Titan phone.

The telco has been expected to launch the Titan in Australia since this time last month. Although Telstra currently offers other high-end Windows Phone 7 smartphones as well as 4G smartphones running Google’s Android platform (such as the HTC Velocity 4G and the Samsung Galaxy S II 4G), the launch of the Titan 4G is the first time Telstra has launched a 4G phone on the Windows Phone platform.

The phone runs Microsoft’s Windows Phone 7.5 operating system and comes with a 4.7″ WVGA super LCD touchscreen, a 16 megapixel camera on its back with dual LED flash and a 1.3 megapixel front-facing camera, a 1.5GHz CPU and the ability to record 720p HD video. It’s not clear why, as the Titan doesn’t have significant additional business features compared with other 4G smartphones, but Telstra is marketing the device as a business-level smartphone.

“Australian small businesses have embraced smartphones to help them work where they want and to stay responsive to customers and new business opportunities. The launch of the nation’s first 4G Windows Phone means small businesses can perform even more advanced tasks from the palms of their hands – like handling larger emails on the go, capturing and sending high-resolution images and video and accessing emerging cloud-hosted services direct from their smartphone screen. Best of all, Windows Phone is incredibly easy to navigate and immediately familiar to anyone who uses Microsoft’s popular Office software,” said Will Irving, Group Managing Director, Telstra Business in a statement issued this morning.

“We were the first company to launch Australia’s first 4G smartphone – the HTC Velocity 4G – and we are very proud to have chalked up another first by introducing Australia’s first 4G-enabled Windows Phone, the HTC Titan 4G,” said Ben Hodgson, Country Manager, HTC Australia and New Zealand. “We have already seen how 4G speeds improve the smartphone experience and when you include the benefits of an easy user interface, a 16 megapixel camera and all the great Microsoft applications, you have a really compelling smartphone.”

Telstra said that customers using the HTC Titan 4G in 4G coverage areas (capital city CBDs, associated airports and more than 80 additional regional and metropolitan locations) would be able to access typical download speeds ranging from 2Mbps to 40Mbps and typical upload speeds from 1Mbps to 10Mbps. When outside 4G coverage areas the Titan 4G uses HSPA+ Dual Channel technology access speeds ranging from 1.1Mbps-20Mbps in all capital CBDs and much of the associated metropolitan areas and many regional locations. Outside these areas speed ranges will be less.

The phone will be available from Telstra Stores and online from Tuesday 29 May, on plans ranging from zero dollars up-front on the company’s $79 plans.

opinion/analysis
If you’re a Windows Phone 7 enthusiast and care about 4G (which you absolutely should, given its incredible speed boost over existing 3G networks), then this is now your new top choice. Nokia is not as of yet launching a model in its Lumia smartphone line in Australia that supports 4G speeds, meaning the Titan 4G reins supreme in the Windows Phone 7 space for now.

Of course, if you’re willing to use an Android or iPhone, then you’ve got additional options, and right now we’d argue there are probably better options on those platforms than the HTC Titan 4G. But then, you probably already knew that ;)