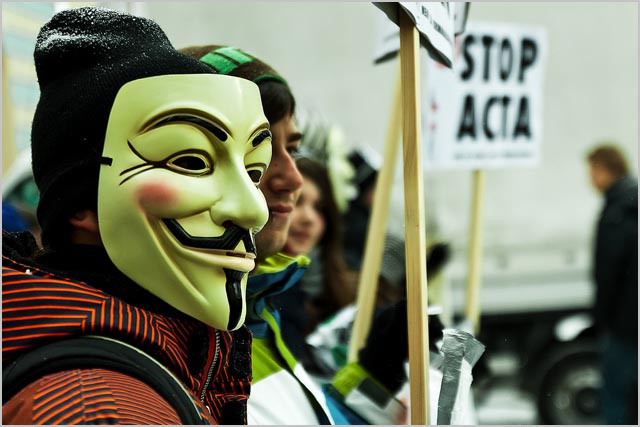 There’s been much concern that the treaty was secretly negotiated by a limited number of nation states – including the United States, Japan, the members of the European Union, Switzerland, Singapore, South Korea, Australia, New Zealand, Canada and Mexico. There has been little in the way of democratic input from developing countries, civil society groups or affected communities. Professor Peter Yu has observed that ACTA is a “bad country club agreement”.

The preamble to the treaty reads like pulp fiction – ACTA raises moral panics about piracy, counterfeiting, organised crime, and border security. The agreement contains provisions on civil remedies and criminal offences; copyright law and trade mark law; the regulation of the digital environment; and border measures. Professor Susan Sell has called ACTA a “TRIPS Double-Plus” Agreement, because its obligations are above and beyond the World Trade Organization’s TRIPS Agreement 1994, and TRIPS-Plus Agreements, such as the Australia-United States Free Trade Agreement 2004.

The agreement fails to balance the protection of intellectual property owners with the wider public interest in access to medicines, human development, and transfer of technology.

Parliamentary scrutiny
Parliaments around the world are concerned the treaty will impinge on national sovereignty, and trammel their role to engage in intellectual property policy-making. In the European Union, there has been uproar over ACTA. Kader Arif, the rapporteur for the European Parliament has resigned, complaining that the process has been a “masquerade”. After clashes over the treaty, European Commissioners contemplated asking the European Court of Justice to consider whether ACTA violates fundamental freedoms and rights. But the European Parliament wants to vote on the treaty first.

In the United States, Oregon Democratic Senator Ron Wyden has put forward amendments, calling for the US Congress to have greater oversight over international negotiations relating to intellectual property and trade. Californian Republican Congressman Darrell Issa has been concerned the treaty will have an adverse impact upon innovation, the digital economy, and internet freedom.

In Australia, the Joint Standing Committee on Treaties has held two public hearings on ACTA. The Department of Foreign Affairs and Trade (DFAT) has been a partisan supporter of the treaty, providing a cursory statement extolling its virtues, but offering no regulatory impact statement or accompanying legislation. Regrettably, there has been no independent analysis of the impact of the treaty in Australia upon economics, human rights or health care.

Access to medicines
The treaty threatens human rights – including the right to a fair trial, consumer protection, privacy, freedom of speech, and the right to health. Amnesty International has called ACTA a potential Pandora’s box of human rights violations.

With its broad definitions of trade mark counterfeiting and intellectual property enforcement, and its failure to fully exclude patent enforcement from its ambit, ACTA has the potential to undermine access to health care.

The treaty fails to provide positive obligations to promote access to essential medicines. It’s particularly lamentable that Australia and the United States of America have failed to implement the Doha Declaration on the TRIPS Agreement and Public Health 2001 and the WTO General Council Decision 2003. As a result, intellectual property owners could sue over the production and export of essential medicines to developing countries and least-developed countries.

ACTA has been criticised by a number of activists in the health sector – including Medicins Sans Frontieres, Oxfam, and Health Action International. Alphapharm – the generic drugs manufacturer – has expressed concern that the agreement could adversely impact the dissemination of generic medicines. What’s more, the treaty doesn’t provide safeguards against customs interdicting generic medicines on the pretence of intellectual property infringement – as when Dutch border officials intercepted a shipment of medicines en route from India to Brazil.

Tobacco control
Health activists are also concerned that the treaty is supported by Big Tobacco. British American Tobacco has argued: “We believe that ACTA will be a valuable tool to address the growing world market in counterfeit cigarettes.”

The treaty fails to expressly recognise the right of countries to take tobacco control measures under the World Health Organization Framework Convention on Tobacco Control. This is disturbing given that the Gillard government is locked in litigation with British American Tobacco and other cigarette manufacturers over its plain packaging initiative.

As James Love insightfully pointed out, the treaty establishes an “ACTA Committee”, which has broad powers to assess compliance with the treaty; to update the agreement; and prescribe best practices. No wonder, Medicins Sans Frontieres has called the treaty a “blank cheque open to abuse”. In addition, ACTA undermines and fragments existing international institutions, such as the United Nations, World Intellectual Property Organization, the World Trade Organization, and the World Health Organization.

The treaty is in clear conflict with the World Intellectual Property Organization Development Agenda 2007, which recognises that intellectual property should promote the United Nations Millennium Development Goals.

The Australian Parliament should reject ACTA because of its impact on human rights – particularly taking into account health care, access to medicines, and development. The government would do better to endorse the Washington Declaration on Intellectual Property and the Public Interest 2011, and implement its outstanding obligations in respect of access to knowledge, development, and the provision of essential medicines.

Coda
Matthew Rimmer, “A Submission to the Joint Standing Committee on Treaties on the Anti-Counterfeiting Trade Agreement 2011 (#ACTA)”, February 2012.

For a discussion of the impact of the treaty on the digital economy, see Matthew Rimmer, “‘Breakfast at Tiffany’s’: eBay Inc., Trademark Law, and Counterfeiting”, (2011) 21 (1) Journal of Law, Information, and Science 128-166.