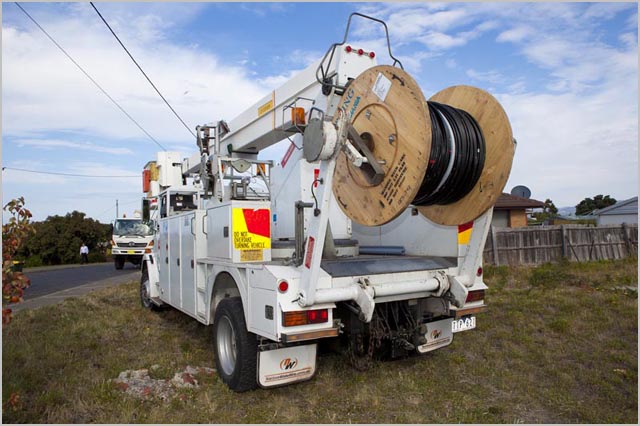 newsThe National Broadband Network Company has blocked a freedom of information request which would have seen information released about the amount which it will cost Australians outside the company’s planned fibre broadband footprint extended to reach their premises, in a move first reported by iTNews.

NBN Co’s fibre optic network footprint is planned to cover 93% of the country’s population. This his has led to some discord among the remaining 7%, especially when some of those are right on the border of the fibre rollout zones. These users are expected to be served by satellite and wireless technologies, both of which have lesser capacity than fibre. NBN Co does have an option for residents on the edge of the network footprint. These customers can pay the charges for extending the cable. This offer came about mainly because residents in Tasmania, in some of the early stage rollout zones were unhappy about ‘just missing’ the fibre connection.

People who wished to have the fibre extended to their homes lying beyond the footprint were asked to call the company before 24 June, 2011 and request a no-obligation quote. The company would then determine how much each extension would cost. NBN Co also made it clear that it wouldn’t be a single number stating the cost of extension as this would have to vary depending on factors such as distance in kilometres from the actual footprint.

In June 2011, for example, a user of the online forum Whirlpool received a letter from NBN construction head Dan Flemming stating that his property would be covered by a wireless or satellite service. Flemming wrote, “It may be possible for you to connect to the National Broadband Network using fibre optic technology, if you agree to pay NBN Co to extend the fibre optic network to your property. Your property will then be connected to the fibre optic network as part of the planned rollout in your area in the coming months.”

In a response published last week (PDF) to a request by technology media outlet iTNews under Freedom of Information laws for NBN Co to reveal the price paid, NBN Co said that it couldn’t reveal the price, as this could snowball and lead to serious problems for the company.

In a statement emailed to Delimiter responding to the FoI issue, NBN Co said that it had “appropriately assessed the FoI request” within the terms of existing legislation and “its role as a commercial entity operating within a highly competitive market”.

“NBN Co is a government business enterprise, and like any business it doesn’t make sense to release information that could jeopardise commercial activities and our ability to negotiate prices for similar services in the future,” the company said. “The quotes provided as part of the network extension trial were based on actual costs, and will vary for each location based on distance, geography and accessibility in a specific area.”

“It is important to note that NBN Co is committed to a process of engagement with communities, and a factor that’s driving our public messaging is explaining that the NBN is delivering high-speed broadband access to every home in the country via one of three technologies – fibre, fixed wireless and satellite. As we go into communities we will provide more information about the capabilities of our network and the different technologies.”

“A fibre network extension is an option that is available, and we are in the process of finalising a formal policy to be released in the near future. However we are also in the early stages of providing greater information about the new generation wireless and satellite services that will also be available.”

opinion/analysis
It seems obvious why NBN Co doesn’t want to provide the fibre extension costs publicly. It is likely the case that the company doesn’t want to kick off yet another round of media speculation and debate about the cost of the network it’s building. If the fibre extension costs were disclosed, I’m sure many edge case Australians who were just to miss out on the fibre would come forward, demanding that the costs be waived or at least cut down.

However, NBN Co’s action here also highlights a lack of transparency. The costs of its fibre extension activities will be released eventually anyway, one way or the other. It makes no sense for the company to hide them. Those costs should be released public and become part of the public debate about the NBN.