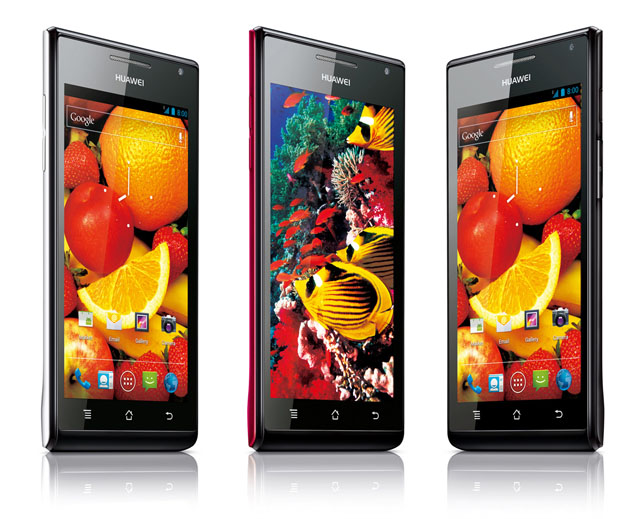 news Chinese hardware giant Huawei last week unveiled the Ascend P1 S this week at the 2012 Consumer Electronics Show (CES). With a thickness of just 6.68mm, the Ascend P1 S is the world’s slimmest phone; and the company’s working to bring it to Australia from April 2012.

The Ascend’s 4.3 inch Super AMOLED 960 x 540 touchscreen comes with Corning Gorilla Glass. With a dual-core 1.5GHz TI OMAP 4460 Cortext-A9 processor and the Android 4.0 “Ice Cream Sandwich” operating system, Huawei also claims that the Ascend P1 S is the fastest and most compact smartphone in its class.

Another new product unveiled at the CES was the Ascend P1, part of the same smartphone series, with the same functionality and a 7.69mm thickness. The company claims that the Huawei Ascend P1/P1 S series is elegant and fast, providing the fastest multi-taking, gaming and video replay in its class. The series features a sleek and narrow 64.8mm body and a strong metallic, three-dimensional design with a PPVD back cover evenly distributing heat. The series offers colour choices of metallic black, cherry-blossom and ceramic white.

Other features in the series include an 8MP BSI rear-facing and 1.3MP HD front-facing cameras with dual flash LED and HDR effect optimisation, which are designed to provide sharper, clearer and brighter detail, in both light and dim environments. Other attributes include 1080p HD video capture capabilities, high-speed data connectivity through 3G, WiFi and Bluetooth, and in-built social media capabilities that allow instant sharing of videos and photos through social media.

Huawei is currently holding talks with local operators and retailers about timings and pricing for this device in the local market. The Ascend P1/P1 S series is scheduled to be available in Europe, North America, Asia-Pacific, Middle East, China and Australia from April 2012.

analysis
With Huawei’s reputation for low prices, it will be interesting to see what price it makes the Ascend available for in Australia and through which carriers or other distribution models. This model is truly a high-end smartphone; and comes in stark contrast to the low-end models which Huawei has launched so far in Australia. If the Ascend goes for a bargain basement price, it may be able to quickly gain Huawei some of the consumer market share in Australia that it’s been slowly gearing up for.