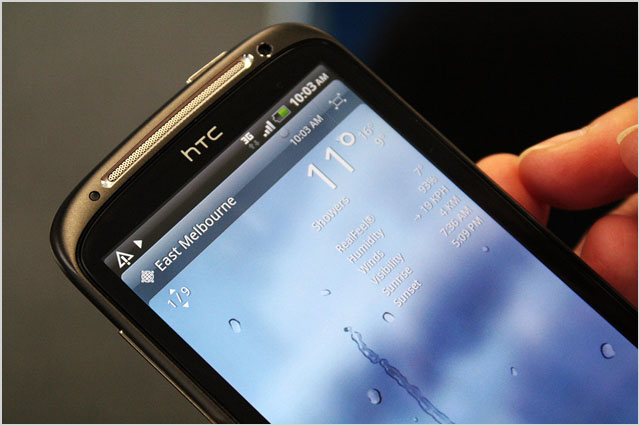 Telstra today started selling HTC’s new flagship smartphone the Sensation in Australia, pricing the handset at the top of its range, with customers to pay a minimum of $79 a month for the device on a plan.

The Sensation features some technical specifications which are slightly above those of its competition, as well as HTC’s own extensive existing line-up, including the Incredible S, the Desire S and the Desire HD.

Like the Desire HD (selling exclusively through Vodafone), the Sensation comes with a 4.3″ touchscreen. However, where most 4.3″ smartphones come with a resolution of 480×800, the Sensation boasts a resolution of 540×960, also known as ‘qHD’ for being one quarter of a full HD 1080p frame. In addition, the Sensation features a 1.2GHz dual-core CPU — slightly faster than the 1GHz rating several of its contemporaries are offering.

The Sensation comes with version 2.3 (Gingerbread) of Google’s Android platform, as well as an 8 megapixel camera, 1GB of internal storage and the ability to record 1080p video. Like a handful of other handsets on Telstra’s Next G network, the device also supports what Telstra has dubbed ‘HD Voice’ — higher quality sound for voice conversations.

Telstra’s plans released today for the phone place it right at the top of the market in terms of costs.

The cheapest you’ll be able to pick up the Sensation for through Telstra is $79 a month, consisting of $30 a month handset repayment, plus a $49 Telstra Freedom Connect plan. Customers will also be able to buy the Sensation on $59, $79, $88 and $129 plans, with plans of $79 or above including the handset at no additional cost. Data quotas range from 1GB to 3GB.

The handset is also available to Telstra Business customers — for example, on a $59 Business Mobile Maximiser plan, with $13 of additional handset repayments. And customers can buy it outright — for $792.

As part of the launch of the Sensation, Telstra is also launching its TelstraOne app for the Android platform. The new app brings news, sports and weather feeds directly to a customer’s home screen, and customers can set up specific widgets for different information feeds — such as for a particular sport such as NRL. A My Account widget shows customers how much data quota they have remaining on their plan, and TelstraOne content doesn’t count towards that quota.

In a statement announcing the launch of the Sensation, Telstra director of mobile products Andrew Volard praised the smartphone. “The HTC Sensation is the epic Android-powered mobile Aussie smartphone fans have been waiting for,” he said.