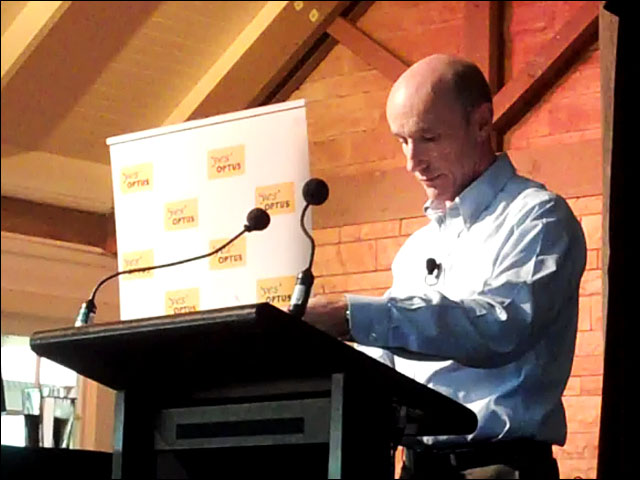 Not content to be left out of the limelight by big brother Telstra, the nation’s number two telco Optus has also this morning announced a significant deal with NBN Co, with the arrangement to see parts of its HFC network shuttered and its customers progressively migrated onto the fibre NBN infrastructure at a total cost to NBN Co of $800 million.

“Optus was born in competition,” said the telco’s chief executive Paul O’Sullivan in a statement this morning. “This deal supports the NBN to create a level playing field for all telcos. Australian consumers will be the winners. This agreement represents a fair deal for Optus. We intend to use the NBN to turbo-charge competition and to deliver the full potential fo a 21st century digital life to customers.”

Optus and NBN expect that the initial migration of customers onto the NBN fibre will kick off in 2014, with the program expected to take up to four years from that point to affect all of Optus’ customers across its HFC footprint — currently extending through area of most of Australia’s major capital cities. Until they are migrated, Optus will continue to provide customers with services over the HFC network.

Telstra’s own $11 billion deal announced this morning will also see it stop providing broadband services over its own HFC network. However, unlike Optus, Telstra has not announced plans to decommission the infrastructure, as it will still use it to provide pay TV services through its joint venture Foxtel.

In its statement, Optus said it would progressively decommission the parts of its network that did not provide ongoing support for mobile infrastructure and business customers. However, like Telstra, it has agreed to solely use the NBN for fixed-line services in relevant areas.

“Optus agrees to use only the NBN for the supply of fixed line services to residential and small business premises previously served by the HFC network,” Optus said. No mention was made of the fate of Optus customers using Telstra’s copper network to receive services, instead of its HFC network — which make up the bulk of its customer base.

Like the Telstra deal, there are conditions to the Optus agreement — it is conditional on approval by the Australian Competition and Consumer Commission, as well as “satisfactory rulings” from the Australian Taxation Office. It also contains various termination rights, including “rights relating to agreeing an implementation plan and the market environment in which the NBN is expected to operate.

In a separate statement issued by NBN Co directly, Quigley added that the agreement with Optus was expected to enhance the take-up rates on the NBN, thereby “improving NBN Co’s revenue plan” and its internal rate of return. As with the Telstra deal, payments to Optus will be made progressively. The payments will be made based on the actual numbers of customers that migrate from Optus’ HFC network to the NBN.