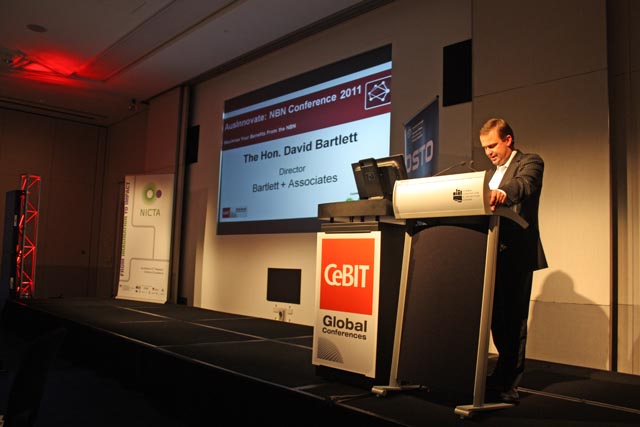 update Former Tasmanian Premier David Bartlett has described the decision by Victoria’s State Government to pursue an ‘opt-in’ policy regarding connecting residents and businesses to the National Broadband Network as “very short-sighted”, arguing for much broader government engagement and focus on the network to maximise its positive outcomes.

In late December last year, Victoria’s new Liberal technology minister Gordon Rich-Phillips confirmed the state would not follow Tasmania in pursuing an ‘opt-out’ model for the NBN. The move will force property owners to actively choose to receive fibre infrastructure in the state when the rollout hits their neighbourhood.

In addition, it is not clear whether the new Liberal State Government in NSW will follow Victoria in choosing a so-called “opt-in” policy, with several requests for clarification on the matter having not produced a concrete position from the government over the past few months since the recent state election.

Speaking at the CeBIT trade fair and conference series in Sydney this week, Bartlett, who left the Tasmanian parliament several weeks ago, said Victoria’s decision was “very short-sighted, frankly”.
“Every state needs to start taking this seriously,” the politician said, arguing that Australia needed to “take the politics out of the NBN”, despite the “patchwork of liberal and labor states” which Australia was currently experiencing.

A spokesperson for Victorian Technology Minister Gordon Rich-Phillips said: “The Victorian Government’s position has not changed with respect to an opt-in approach. We have not received an approach from either the Federal Government nor NBN Co regarding opt-out legislation.”

Bartlett argued that rural and regional areas in Australia were currently facing a variety of obstacles, with “everything against the regions” standing in the way of their economic renewal. The rollout of fast broadband, he said, offered the “brightest hope and light” for regional renewal to occur, and so consequently, every state government should be engaged in the NBN process.

In particular, the politician said he believed local government has a strong role to play in planning for the rollout of the NBN as well.

Appearing to refer to NBN Co’s recent commission of a series of new advertisements espousing the virtues of the network, Bartlett said he was not convinced “in any way, shape or form”, that “a Sydney marketing company” knew how to talk to residents in early stage rollout areas like Smithton in Tasmania or Armidale in NSW.

“Running a big advertising campaign, a centralised grand marketing campaign, will not engage homes,” he said.

In contrast, Bartlett said the way to engage people about the NBN was to do so with local content and local stories, taking a certain approach and having it “re-skinned” for every local community, so that local residents understood what the NBN would mean for them. For example, he noted that in Smithton residents were benefiting from a local service scanning for skin cancer, which sent the scans to experts in the city for analysis, using broadband.

“They would have had to drive 2.5 hours for that, previously,” he said.

In this sense, local community portals, filled with content and stories which could easily be produced cheaply, would benefit and inform residents, Bartlett said. “Don’t just leave it up to Canberra,” he advised local governments. “My message to regional leaders, councils and shires is: Get prepared. The winners of the NBN will not be those who are cabled first. In fact the winners will be those who get prepared with a digital strategy, with a broadband strategy, which underpins renewal in every aspect of their community.”

In addition, Bartlett noted that while ICT industry figures could be great champions for the NBN, it was important that those not from the industry get involved in the renewal process. “The more the visible leaders of the narrative come from the ICT community in our region, your town, the more the rest will think this is ‘only for the geeks’,” he said.