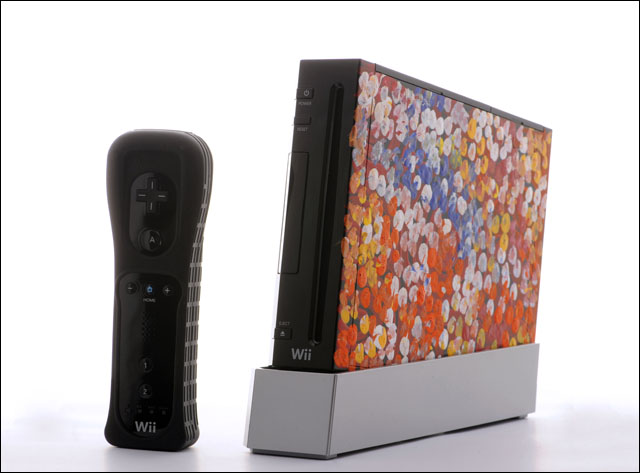 Nintendo has commissioned four of Australia’s top indigenous artists to apply their creative talents directly to the company’s Wii consoles, with the aim of eventually benefiting indigenous education through a local charity.

According to a statement issued by the company this morning, the artists who were invited to participate in the effort were Gloria Petyarre, Barbara Weir, Emily Pwerle and her sister Gayla Pwerle.

All are well-known in the Aboriginal art community. Petyarre, for instance, won the Wynne Prize in 1999 for her piece Leaves, and has travelled internationally to represent the nation and her art in countries such as the UK and India. Weir, for her part, has also travelled internationally to exhibit her art and has a list of exhibitions a mile long, dating back through the early 1990’s.

The Pwerle sisters are two sisters of well-known artist Minnie Pwerle from the Northern Territory. They’ve been painting for less time than Petyarre and Weir — but have achieved a great deal of recognition and have a close relationship with Weir — their niece. All of the artists have sold artworks for tens of thousands of dollars each.

Nintendo said the Wii concoles would be auctioned via eBay in custom-built acrylic display cases, and would have their actual video game functionality disabled to ensure the preservation of the associated artworks — although the winning bidders will also receive a separate, playable Wii console.

The funds raised will be put towards the Shalom Gamarada scholarship program — which aims to encourage indigenous students to complete their university education through providing financial support.

“Having these important artists create these piece for Wii will not only raise much needed funds for indigenous education, it will also open new doors by raising awareness to people who would not normally be familiar with the work we do at Shalom Gamarada,” said Jenny Hillman — the organisation’s curator. “Some of the artists involved can boast selling individual pieces upwards of $20,000, and what they have created for Wii are exceptional, one-off originals that I am sure will draw national attention for the eBay auction,” Hillman added.

The consoles can be viewed between now and 6 March, when the auction closes, at several locations — from now until 23 February, at Kaleidoscope Gallery in Paddington — and then at Nintendo facilities in Sydney’s CBD Myer store and EB Games in Swanston St, Melbourne.