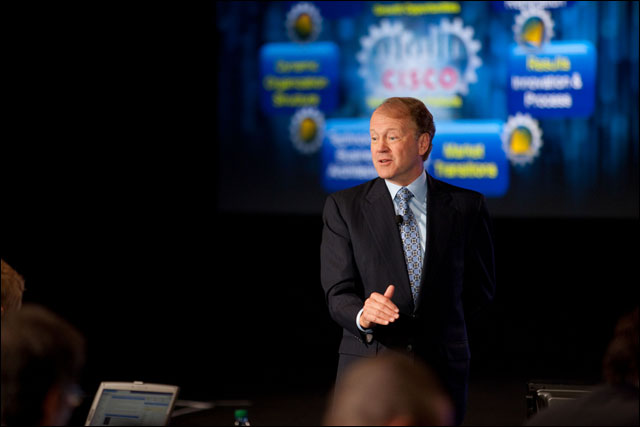 The cloud infrastructure consortium which counts VMware, Cisco and EMC as its members has added yet another major Australian company to its growing list of conquests, revealing yesterday that NBN Co had inked a contract with lead supplier Cisco to kit out its datacentre to the tune of $9.5 million over the next three years.

VCE has been going from strength to strength in Australia over the past few months, signing up end user customers like Westpac and Corporate Express, as well as service providers like CSC and telcos like Optus to buy its products.

In a statement issued yesterday, Cisco said it would deploy NBN Co’s solution, utilising the Virtual Computing Environment (VCE) which is jointly contributed by Cisco itself, as well as EMC and virtualisation player VMware. The trio’s stack is known as ‘Vblock’. Pictured above is Cisco global chief executive John Chambers.

“We are pleased to have acquired yet another strategic supplier as we continue to construct the building blocks that underpin the operation of the NBN,” said NBN Co head of corporate services Kevin Brown in a statement.

“Cisco is recognised as a leader in global networking equipment manufacture, and brings a wealth of experience to the project. We look forward to working with their 600-strong team in Australia as we develop the supporting infrastructure for the NBN.”

The contract was welcomed by the respective leaders of the three supplier companies — Cisco’s Les Williamson, EMC’s David Webster and VMware’s Paul Harapin.

The news comes as organisations around Australia have recently flagged plans to accelerate their journey towards the sort of private cloud computing solutions represented by the VCE coalition.

EMC Global Services director for Australia and New Zealand, Adrian Ianessa, recently said in an interview that he was seeing a huge uptake in VCE solutions in Australia — which he said indicated the trust and credibility that the individual consortium members had with customers.

In practice, he said, the trio’s sales and pre-sales teams would work closely together on opportunities. In some cases Cisco would take the prime role — as with NBN Co — and in other cases, EMC or VMware. The Vblock solutions can also be purchased through partners such as Dimension Data.

In general, he said, it was a number of industry verticals taking up the solutions. Service providers CSC and Optus jumped on board very early, but customers in other sectors — such as banking and even education — were also taking up the offering.