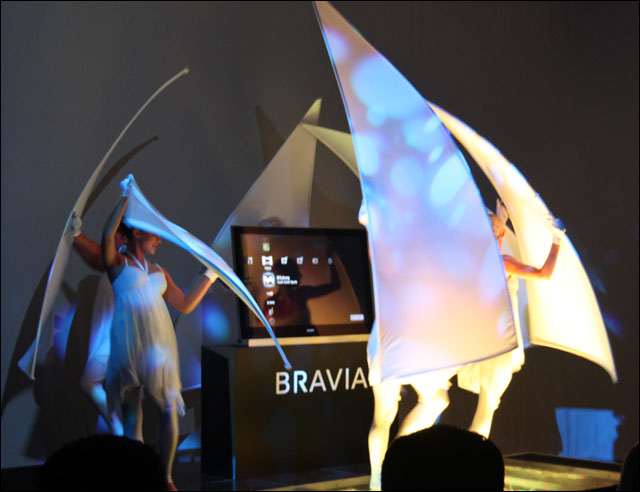 3D televisions went on sale in Australia several months ago, complete with glitzy launches involving dancing girls, complicated lighting sets and fast-paced music. But have the sales figures delivered on the hype? Are Australians really buying 3D TVs or not?

Yes, according to the manufacturers of the technology. But retailers remain reluctant to release sales figures several months on — meaning the true picture of how the third dimension is affecting Australian loungerooms remains elusive.

Pearce attributes the early success to sports fans impressed with a National Rugby League promotion where State of Origin games have been broadcast in 3D.

Sony also claimed to have experienced strong sales of the new consumer technology, “Very well. Very well. The only issue is we could sell more if we had more,” said Craig Jackson, senior product specialist at Sony Australia.

The Sony executive said he believed the industry did a very good job earlier this year of raising awareness of the new 3D technology before the new TV models hit Australia, noting the heightened level of awareness probably drove what he said was the strong level of uptake from consumers.

Jackson said that 3D sports content — such as The World Cup and State of Origin — earlier this year really cemented the decision for some people. “When it was coming over the air all they had too do was plug their TV into the wall that really made people think: ‘Well, this is something we will be doing in the future and I need to be thinking about this in my next TV purchase’.”

Samsung was also positive about the performance of its 3D TV product range. “Samsung’s range of TVs with integrated 3D technology across LED, Plasma and LCD are all selling extremely well,” said group senior product manager — AV Evan Manolis. “There was significant excitement in the market around the arrival of 3D technology and, being first to market, Samsung was able to lead the field and convert this consumer buzz into sales,” he said.

Manolis said that the drive behind consumers seeking out the 3D technology — to try and buy — was the “carefully planned, significant above and below the line 3D marketing campaign” in place, which he said helped drive consumers into retailers asking to experience and purchase 3D technology.

“Consumer research we conducted prior to launch anticipated a high demand for 3D technology; even so, in the early days after launching, sales exceeded our forecasts and expectations,” he said. Manolis added that consumers were initially driven to retail outlets to experience 3D but were “equally sold” on other features such as Samsung’s internet and social media integration and PVR functionality, for example.

Retail giant Harvey Norman and consumer product tracking company GFK were not prepared to to make a statement on the technology’s success or lack of it at this stage, with GFK stating that it was just too early. JB Hi-Fi was slightly more open, but did not offer figures to support a statement backing Sony’s claim that demand was outstripping supply.

“Unfortunately we unable to share any numbers with you,” said JB Hi-Fi marketing director Scott Browning. “However we are seeing increased customer interest in the category and it would be fair to say that demand is outstripping supply at this stage.”

Panasonic said it was too early to determine the demographic of 3D TV consumers but Samsung took a shot at it.

“Tech savvy consumers, first to market adopters of new technology in the 25-45 age bracket,” said Manolis. “This demographic is quite time-poor, so we have found in our research that they are also attracted by the PVR functionality that our TVs offer, allowing them to watch programs when they want, rather than when they are broadcast.”

All of the manufacturers have a few 3D TV models on the market at the moment, so which ones have performed well?

“We have seen significant sales of both our 3D Series 7 LED and Plasma TV ranges, but the recent launch of our Series 8 LED TV, with pinpoint dimming technology has also allowed us to further grow our market presence in 3D LED,” said Panasonic’s Pearce.

“We have seen the 55” screen sizes in 3D LED sell extremely well, and with 3D plasma, all screen sizes (50”, 58” and 63”) are selling very well. 3D is all about the ‘big screen’ experience which is why larger screen sizes are proving most popular with consumers.”

Sony’s Jackson acknowledged the availability of its models. “We’ve got three, although a couple of them are in very limited supply at the moment,” he said. “The HX model is the one we have; That is what most people would have seen if they had gone to a Sony Centre or Harvey Norman and other retail stores. That’s the one we’ve got the most stock of and that’s one the one people would be familiar with.”

Panasonic is confident 3D TV is here to stay.

“3D TV will become the norm. At the end of the day, the TV is all about picture quality, color reproduction and how the TV performs when watching sports, high definition movies and gaming,” said Manolis. “3D is a feature of the TV which allows you to experience 3D TV, movies and gaming, and as more content comes out, this will drive 3D uptake even further. In 2011 you will start to see 3D technology broaden out across the flat panel TV market, rather than just at the premium end of the range.”

“I think what is probably the big one now — we will start seeing a little bit more of sort of noise and excitement is 3D games … the next step for 3D is the interactive 3D,” said Jackson. “You can watch a 3D movie and watch it like you are standing in front of it and see what’s going on. But if you are holding a controller and controlling the action, you really do feel like you are inside what’s going on. I think gaming is next boom like sport was earlier on the year — that’s really going to take off now and run with 3D.”

Jackson said that after the boom of 3D movies — December and March — and the levelling out of the 3D gaming, that is when Sony could “start to focus more what is in store in terms of TV”.

Pearce said that 3D was a massive focus for Panasonic and that the critical point for 3D was “getting it as immersive as possible”. “The most important part of that is the bigger screens of 3D. It’s really important to build a really compelling big screen experience,” he said, adding that Panasonic will introduce 65″, 58″ and 54″ models in September — in time for the football finals.

“One of the big drivers is gaming,” Pearce said. “Gaming, movies and all those types of things gathered together to make sure the full content offering is available to consumers.”

Browning stated that JB Hi Fi could see the staying power for the new consumer technology. “JB Hi-Fi sees a future in 3D technology across a wide spectrum of products including TVs,” he said.

However, with 3D video games set to be the next big thing in 3D TV — especially with the Sony push of the PS3 console — JB Hi Fi did not see any correlation between consoles and TVs sales. “At this stage we are not able to attribute any growth in consoles (especially given that most PS3 consoles are already 3D enabled via firmware update),” said Browning.

With nobody prepared to release hard numbers about 3D TV sales in Australia, it is hard to know what impact the new technology is really having on the local market. But one thing is for certain: Everybody and his dog wants to make sure the consumer knows the technology is out there, and at this stage positive vibes are emanating from every player in the market. Whether this sentiment will translate into sales — only time will tell.