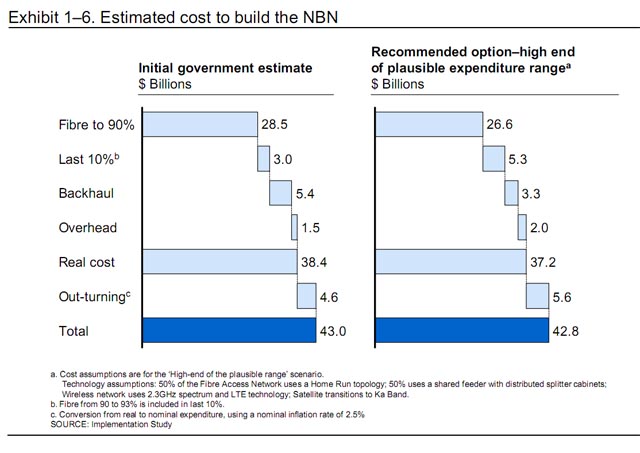 Consulting firms McKinsey and KPMG have found that it would cost $42.8 billion in the worst case to build the National Broadband Network — just $200 million less than the Government’s own initial estimate more than a year ago.

In the report, McKinsey and KPMG wrote that its recommended solution of deploying optic fibre to 93 percent of the population (the Government had initially estimated 90 percent), a fixed wireless network to the next 4 percent, and satellites beyond that, was affordable within the Government’s initial cost estimate of $43 billion.

The costs reflected the high end of the plausible range of costs the consultants modelled, the report said. The pair found that the cost of the fibre access network to 90 percent of the population was slightly less than was the Government estimated back in April 2009 when it launched its NBN plans, with the connections to the remaining 10 percent being more expensive, primarily due to the consultants’ recommendation to extend fibre beyond the 90 percent.

The projected costs reflected the assumption that no agreement would be reached with Telstra to share infrastructure such as ducts, pits, exchanges and unused backhaul fibres.

Telstra, NBN Co and the Government are currently negotiating the terms under which the telco would migrate its customers and infrastructure into the NBN — if at all.

If an agreement was reached, the consultants wrote, the overall cost of building the NBN could be lowered.

In this sense, striking an agreement with Telstra would only make commercial sense for the NBN if “it reduces NBN Co’s total cost to build relative to not using Telstra’s infrastructure.

If, in turn, an agreement to migrate traffic onto the NBN was struck with telstra, any consideration paid should be treated as an “incentive payment”, wrote the consultants — netted against the revenue brought forward from early migration of the traffic concerned — and hence “would not be relevant to an analysis of the $43 billion capital expenditure estimate.

“The Study confirms that the NBN business model establishes that taxpayers are paid back their investment with a modest return by year 15 of the project on the basis that privatisation is completed,” said Conroy in a statement.

“Twelve months ago, the Government committed to investing in a $43 billion NBN. The study confirms that the company will generate sufficient earnings by the end of year 7 so that the Government’s recommended investment peaks at $26 billion.”