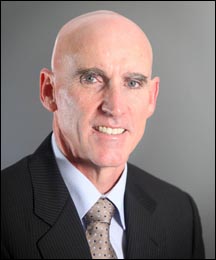 The company in charge of building and operating the National Broadband Network this afternoon promised to deliver “a full business case” to the Government for the project by May 31, in the wake of the release of the NBN Implementation Study earlier today.

In the report, consulting firms McKinsey and KPMG found that it would cost $42.8 billion in the worst case to build the National Broadband Network — just $200 million less than the Government’s own initial estimate more than a year ago.

And Communications Minister Stephen Conroy said the study confirmed that the NBN business model would ensure taxpayers would be paid back on their investment, with a modest return by year 15 of the project.

“In accordance with [Government Business Enterprise] guidelines, NBN Co will be submitting its corporate plan, including a full business case, to Government by may 31,” said NBN Co chief executive Mike Quigley (pictured) in a statement, welcoming the report and stating it was “pleasing” that the report backed NBN Co’s conclusion the project was financial viable.

“In the meantime, NBN Co continues to design and plan for the construction of the network based on the criteria set for it in July last year,” he said.

NBN Co will also await what Quigley said was the Government’s final decision on policy matters — the recommendations in the report.

The lack of a business case for the NBN has been a sticking point for the Opposition and other parties in the telecommunications sector since the project was first fully revealed in April 2009, with claims being repeated that the project was ‘drawn up on the back of an envelope’.

For example, today Shadow Communications Minister Tony Smith said the Implementation Study did “not alter the Federal Coalition’s view that Labor’s NBN is an irresponsible, reckless and risky Rudd adventure with taxpayers’ money”.