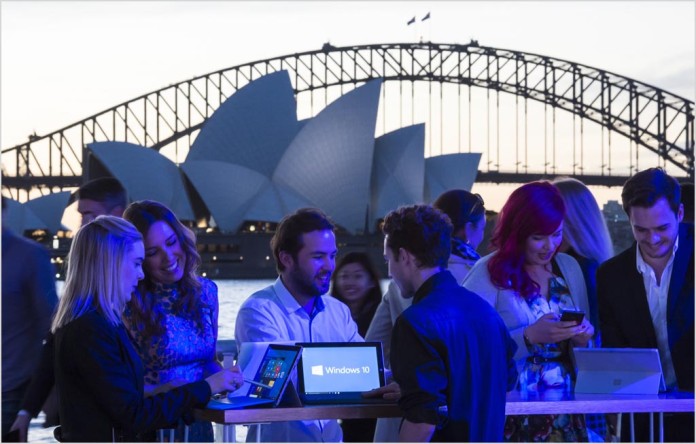 news Australian company Brookfield Global Integrated Solutions has revealed it is in the throes of a major deployment of Microsoft’s new Windows 10 operating system, taking the opportunity offered by corporate restructuring to go ahead with the upgrade.

Windows 10 was formally released to all customers globally several weeks ago. It departs from Microsoft’s previous operating system Windows 8 in that it features a more traditional desktop paradigm by default, but it also includes a large number of new features such as support for ‘universal’ applications that can run across multiple platforms, from PCs to tablets and smartphones, a brand new web browser named ‘Edge’, and support for fingerprint and face recognition login. Enterprise customers will welcome enhanced security and manageability features.

The release has largely been praised by reviewers, with most noting that Windows 10 features a more mature implementation of a number of new features introduced in Windows 8.

Speaking at a Microsoft launch event in Sydney several weeks ago, Brookfield Global Integrated Solutions’ IT director Richard Fox Smith noted that his company had recently been going through a number of corporate changes.

The company had previously been a joint venture between Brookfield and Johnson Controls, but has gone through a de-merger, leaving it with some 850 geographically dispersed and very mobile staff.

As part of the demerger, Fox Smith told journalists, Brookfield decided to bring its IT support function in-house if it could. The company’s board gave its approval in mid-May this year for an extended pilot of an internal IT shop handling some 200 users.

His company, Fox Smith said, worked with Thomas Duryea as an IT partner to rapidly stand up an entire set of IT infrastructure to run its own IT operations in-house, consisting of an entire Microsoft suite — Active Directory, Office 365 and so on. During this process the decision came up as to whether Brookfield would deploy a standard operating environment based on Windows 7, Windows 8.1, or the brand new Windows 10, which was still undergoing final development.

The executive said Brookfield didn’t really want to deploy Windows 7, as it was “a bit on the old side”. Windows 8.1, with its focus on mobile, was “a bit jarring” and not particularly well taken up by the corporate sector. In comparison, the company saw Windows 10 as a “tremendous opportunity”, with the right technology set for cloud computing and the user base, which is heavily mobile-based.

The company letf itself the option of deploying Windows 8.1 instead, but never lost confidence in Windows 10 throughout its testing process, despite the fact that the software was not in its final release stage yet.

Brookfield initially deployed some 20-odd users to Windows 10, and is planning to hit 60 by the end of August before aiming for the full 200. Eventually, if its IT insourcing effort is a success, which it looks like it will be, the company will most likely deploy Windows 10 across its whole workforce.

Fox Smith said other key factors in the company’s decision included the fact that Microsoft is shifting Windows to an “as a service” model. The company views Windows 10 as the last official version of Windows, with all future updates being delivered on top of that stable platform.

“… we’ve gone with the new version because we know that the platform will grow with us over the next few years and deliver continual change. It’s the same reason we went with Office 365, to get that continual adoption of new features and not be stuck in that historical way of the IT department having control over the future because we mightn’t have the bandwidth to go through an upgrade cycle,” said Fox Smith.

“The feedback we have got so far has been excellent. People have been saying that the changeover process has been really well-received and they are loving the functionality and ease of use of the laptop. There’s no doubt it is a change of user interface, but that’s not been an issue. “

“We have also been impressed with the security aspects of Windows 10, which is really important to us. We know it’s got the best versions of BitLocker and DirectAccess, along with a whole lot of other tooling that we are expecting will make it the best and most secure operating system yet. Windows 10 is built to be mobile, and that combined with the security gives us great comfort around having data in the field.”

Microsoft Australia has stated that it expects relatively rapid adoption of Windows 10 in Australia. The company has recently conducted research showing that about 23 percent of local organisations intended to upgrade to Windows 10 within six months after the platform’s release, a further 17 percent within seven to nine months, and about 25 percent within ten to twelve months. Another 10 percent believed they would upgrade to Windows 10 in the second year after the platform’s release.

opinion/analysis
As I’ve previously written, I’m hearing mainly positive things about Windows 10 so far, apart from some of the privacy issues that have been flagged. I expect to see a relatively rapid deployment in large enterprises throughout Australia.