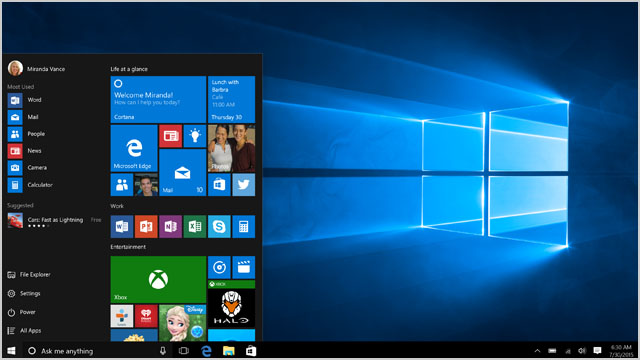 This article is by David Tuffley, Lecturer in Applied Ethics and Socio-Technical Studies, School of ICT, at Griffith University. It originally appeared on The Conversation.

analysis The latest version of Microsoft’s Windows operating system will begin rolling out from Wednesday (July 29). And remarkably, Windows 10 will be offered as a free upgrade to those users who already have Windows 7 and 8.1 installed.

That the upgrade is free is an interesting move and comes off the back of much criticism over Windows 8. Interestingly, the software giant has also skipped over any planned version 9 of Windows. So what does this mean for Microsoft and the 1.5 billion people it says use Windows every day? Can the company restore some of the consumer and user confidence it has lost in recent years?

Under Satya Nadella’s leadership, Microsoft is transforming itself into a “productivity and platforms company”. This is a bold re-invention of the company as it seeks to secure its future in a market moving steadily towards cloud-based services and mobile devices powered by Google’s Android and Apple’s iOS. Nadella sees it as necessity to broaden the company’s scope of operations beyond its current family of products and conventional modes of delivery. The market does not leave him with much choice if the company is to stay in the game, if not be a leader.

After Windows 10 it’s just Windows
For decades, the latest release of Windows has been a major event in itself. But that is set to end.

Windows 10 will be the last numbered version of the operating system. After Windows 10, it will simply be known as Windows. And you will get your updates incrementally from from the cloud via a subscription service.

In what it is calling a “platform convergence strategy”, Microsoft is creating a unified operating environment for phones, tablets, ultrabooks, laptops, desktop computers and Xboxes. All will be integrated by Windows 10, and increasingly so with the later Windows. The platform convergence strategy allows the creation of universal applications that can run on any platform with Windows 10.

Surprisingly, applications that have been developed to run on Android and iOS devices will also be able to run on Windows 10, albeit once they have been converted to make them compatible. Still, this will open up a vast number of potential applications to run across Windows platforms.

Focus on gaming
Microsoft’s acquisition last year of the hit game Minecraft for US$2.5 billion is a measure of how seriously Nadella and his strategists take mobile gaming.

Minecraft is a hugely popular open world game that gives players the freedom to create create and manipulate an on-line world made of Lego-like blocks. The move will establish Microsoft in the booming world of mobile games as well as further popularising the Xbox gaming console.

But the question on many people’s minds is whether the personal computer itself is dead, and along with it Microsoft?

It’s not the first time we have heard such dire predictions. It is true that PCs are today part of a more complicated personal computing environment, but it is a stretch to declare the PC dead. There is only so much you can do with a phone or a tablet. For serious work or fun, a full-spec laptop or desktop is still the machine of choice and will remain so. For example, I am writing this article using a laptop.

The new digital economy
The Internet of Things is expanding, with embedded sensors and data gatherers becoming pervasive. Open platforms and operating environments that feed data into the cloud and allow people to derive value will be an important part of the new digital economy. With traditional jobs under threat from automation and artificial intelligence, imagination and creativity will be more important than ever.

Microsoft’s strategy to diversify and integrate its platform offerings and move its services to the cloud while opening itself up to using its competitor’s apps would seem to be a bold but rational response to the current challenges; one that stands a good chance of succeeding.

There will no doubt be loud complaints from those who claim to speak for all of us. But in the end if a computing environment delivers value and allows people to live their lives as they please, then that platform is likely to succeed, particularly when it has the muscle and know-how of a well-established company behind it.

How Google and Apple respond will be very interesting, but competition is a good thing.

David Tuffley is Lecturer in Applied Ethics and Socio-Technical Studies, School of ICT, at Griffith University. This article was originally published on The Conversation. Read the original article.