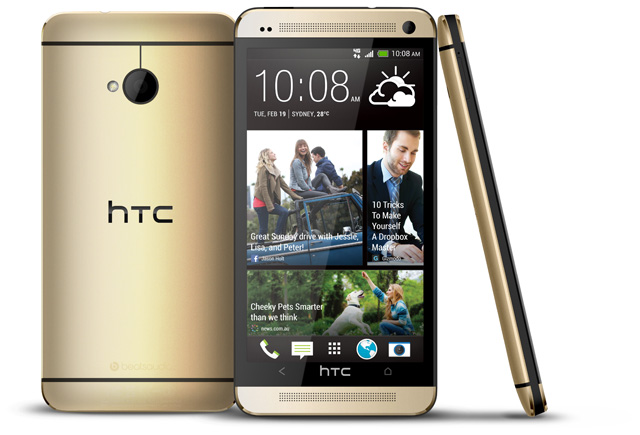 in brief If you’re an Android user but also a fan of the new gold option on Apple’s iPhone 5S, you may be interested to know that Taiwanese vendor HTC has just announced a ‘champagne’ gold version of its flagship One handset through Telstra. The company said in a statement this morning:

“HTC, a global leader in mobile innovation and design, today unveiled its award-winning HTC One flagship model in a sophisticated new colour – Champagne Gold. Available exclusively with Telstra from January 21, the new HTC One Gold edition builds on the existing colour portfolio of Glacial Silver, delivering the same power and acclaimed features including HTC Zoe, HTC BlinkFeed and HTC BoomSound. The HTC One Gold will be upgradable to Android 4.4 KitKat and the new HTC Sense 5.5 update, once available.

The HTC One has won international recognition for its stunning design. The latest colour makes HTC One Gold the glamorous new choice and a must-have for the New Year.”

The original HTC One launched in Australia in mid-2013, meaning the gold version comes mid-way through HTC’s release cycle. It is possible that the vendor will announce a next generation of handsets shortly. In general, the HTC One was ranked as a very solid handset when it launched. Delimiter’s review stated:

“The HTC One is a very high-powered smartphone with awesome build quality, best-in-market sound and screen quality and a solid camera which takes great pictures in low light. It also comes with some innovative software features such as the Zoe camera option. These features and the overall experience of using the HTC One are enough to vault it into the top echelons of high-end smartphones available in Australia today.

However, we do also have to note that the One is hamstrung by HTC’s annoying revamp of Android, and HTC has sacrificed some quality on its normal camera shots because of the low megapixel rating on the One’s camera. It’s battery quality is better than that on some previous HTC models, but it still needs work.

Because of this, we have mixed feelings about the HTC One. On the one hand, if we were to recommend a list of high-end smartphones to our friends to check out, if they’re buying a new phone, then the One would definitely be on that list. However, on the other hand, this is not the sort of phone which has left us wanting to buy one ourselves. And that does say something about the One — that HTC has screwed some things up here. We were happy to give the review unit back.

To be the best smartphone it could possibly be, the One needs one little modification which HTC has consistently refused to deliver: It needs to ship with a stock version of Android. Reviewers consistently remind smartphone manufacturers that this is a highly desirable feature which would improve their Android models, but so far, manufacturers seem very unwilling to come to the party. Perhaps you could crack the One and install CyanogenMod on it … but why can’t HTC just make stock Android an option right up front?”