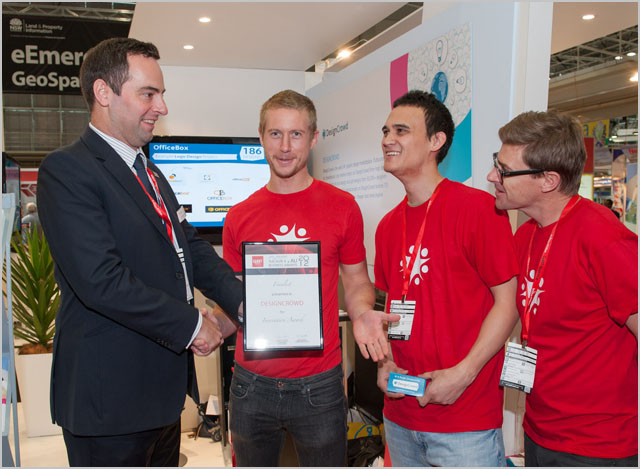 news Australian web startup DesignCrowd announced overnight that it had picked up a further $3 million in funding from Melbourne-based venture capital firm Starfish Ventures, which it will use to continue to scale up its operations and take advantage of the growing trend towards crowdsourcing tasks online.

Founded out of a Sydney garage in 2007 by Alec Lynch (pictured above, second from right, receiving an award at CeBIT 2012), DesignCrowd was funded with $10,000 in savings and three credit cards. Bootstrapped for two years, raised $300,000 in seed funding from angel investors, going on to raise $3 million from Starfish Ventures in 2011. The latest $3 million investment from Starfish Ventures takes it total funding to $6.3 million.

DesignCrowd helps businesses outsource or ‘crowdsource’ logo, website, business card, t-shirt, book cover, presentation designs and ideas from over 100,000 designers around the world. DesignCrowd recently reached $12 million in design projects through its site, and expects this to exceed $20 million in 2014.

In November 2011, DesignCrowd announced Melbourne investment house Starfish Ventures had invested $3 million in the company. The money will allow the Sydney company to further expand globally. “We’ve done well in Australia, now we want to take on the world, and Starfish is the perfect partner to help us succeed,” said Lynch in a statement issued at the time.

Overnight, the company announced it had secured a further $3 million in funding from Starfish Ventures, taking total funding to $6.3 million. DesignCrowd will use the funding to continue its international expansion including establishing a US office, and scaling operations and marketing functions internationally, according to the company.

Since its last funding round in 2011, DesignCrowd has grown its team from three staff to 20, launched its service in eight new countries, hit 100,000 registered designers, and grown revenues over 500%. The new funding will be used to open a US office, hire US sales and marketing specialists, and continue to scale the company’s international marketing efforts.

“We’re very pleased to have secured additional funding which will allow us to pursue an exciting and expanded international growth strategy,” said Lynch, founder and CEO of DesignCrowd.

“The US market is at the top of our list of priorities. It’s become our biggest source of sales despite not having an office or any employees there. We’ll open an office and build our team in the US in the next 12 months. The extra capital will also help us explore new markets including Europe, South America and Asia and allow us to invest further in new products and features.”

Anthony Glenning, Investment Director at Starfish Ventures, said it was an exciting time to be investing in the flourishing startup: “Given DesignCrowd’s tremendous growth to date, including crossing a revenue run rate of $10 million, we are excited to provide further capital to fuel further growth by expanding services in the US and other regions.”

The news comes as other Australian crowdsourcing startups have also achieved financial success. In September local firm Freelancer.com revealed it would turn down the offers it had received to sell to a larger group or take investment, instead flagging plans to list on the Australian Securities Exchange later this year and continue the drive to develop Australia’s home grown technology industry.

It had been reported at the time that Freelancer.com had received a $400 million offer from Japanese JR and recruitment giant Recruit Co, which would have made Barrie and co-investors extremely wealthy, but resulted in the Australia-based online outsourcing marketplace being placed in foreign hands, as has happened with a large number of Australian technology companies over the past several decades.

The company eventually listed some 6.9 percent of its overall shares on the market, with the aim of raising $15 million to boost overseas expansion plans.