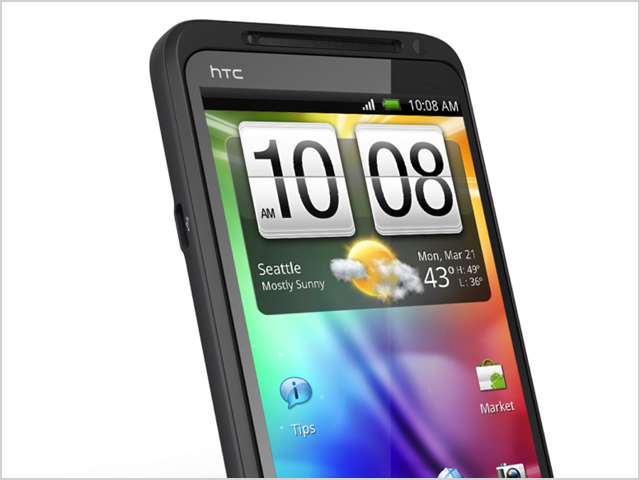 review And now for the moment you’ve all been waiting for: glass-less 3D on a smartphone! Or maybe not. Consumer 3D hasn’t exactly set the world on fire, and the first product that ever offered glass-less 3D, the Nintendo 3DS, was met with such lasklustre sales that it dropped a hundred bucks off the pricetag only four months after launch. Will 3D on a smartphone fare any better? If any company could pull it off, it would be smartphone trailblazer HTC.

Design
You know how high-end smartphones are looking increasingly underfed these days? The HTC Evo 3D is more of a ‘three square meals a day’ kind of smartphone. At first we were a little put off by how thick and weighty it is, but after spending some time with it, we found ourselves appreciating its solidly-constructed physique. The Evo 3D is quite a meaty smartphone, tipping the scales at 170g and measuring 12mm deep. By comparison, the Samsung Galaxy S II weighs 116g and is 8.49mm thick, and the HTC Sensation is 148g and 11.3mm thick.

From the front, the Evo 3D looks similar to many other Android smartphones, with a 4.3in display, four round capacitive buttons below it and a speaker grill on top. What you won’t find on many Android smartphones, however, is a dedicated camera button on the right-hand side. This isn’t a skinny black slab like the power and volume buttons, which are designed to blend seamlessly with the black casing – it’s a large, attention-grabbing aluminium shutter button that both launches the camera and triggers the auto-focus. Next to the shutter button is a slider made out of the same aluminium that switches the camera mode from 2D to 3D.

The Evo 3D’s rear-end is where the party’s at. A striking red aluminium frame draws attention to the camera pod, which houses dual five-megapixel cameras and a dual-LED flash. Most of the backplate’s surface has a textured pattern that makes the phone easier to grip, and combined with the red ring around the camera, it gives the Evo 3D a sporty/ruggedised appearance from behind.

Features
The Evo 3D has all the ingredients of a “super-phone”: a 4.3in qHD Super LCD screen, 1.2GHz dual-core processor, 1GB of RAM, and the very latest Android 2.3.4 operating system. But the main attraction is its famous glass-less 3D display. This uses the same ‘parallax barrier’ that’s found in the Nintendo 3DS and LG Optimus 3D (the first 3D smartphone released in Australia), which causes each eye to see a different image without needing the help of dorky 3D glasses.

That’s all well and good, but what can you actually do with it? Most of the time, you’ll be using the Evo 3D in the standard 2D view – it’s only when you use the camera in 3D or play a 3D game or movie that the 3D display jumps into action. It ships with two 3D games preloaded, Need for Speed Shift and Spiderman 3D, and while there’s no YouTube 3D app per se (like there is on the LG Optimus 3D), you can do a search in the standard YouTube app for 3D content. The camera can be used for shooting either 2D or 3D, and video content in either dimension can be recorded at up to 720p HD and uploaded to YouTube. You can also output 2D or 3D content to a HDTV using an optional MHL adapter (this connects to the microUSB port – it doesn’t have a built-in micro-HDMI port) or streamed over DLNA.

Aside from the 3D apps and games, software on the Evo 3D is much the same as it is on the Sensation. You can personalise the seven homescreens up the wazoo with beautifully-designed HTC widgets, live wallpapers, themes, shortcuts and more, and the customisable ‘active lockscreen’ displays new notifications and lets you launch directly into particular apps whenever you unlock the phone. There’s also a lot of extra software on-board to accompany the standard Android apps, including Polaris Office, HTC Locations (a turn-by-turn navigation app with a 30-day trial), and FriendStream (a Facebook and Twitter aggregator).

HTC is the first company we know of aside from Apple to offer a movie download and rental service directly from the phone. It’s available via the HTC Watch app, and pricing is more or less on par with iTunes, with new releases available for $24.99 to own or $5.99 to rent. Older movies can be bought for as little as $9.99, and file sizes are roughly 1GB per movie.

Performance
The Evo 3D feels extremely snappy for day-to-day use. When you press the lock/power button, the lockscreen appears instantly – doing the same on the HTC Sensation is half a second slower, and on the Samsung Galaxy S II it takes a leisurely 8 seconds. Everything else on the Evo 3D feels fluid too, whether you’re moving between homescreens, bringing up the apps launcher or notification drawer, opening apps or switching between them. It’s worth noting that the Sensation has only 768MB of RAM, whereas the Evo 3D has a full gigabyte – and it did feel like the fastest Android smartphone we’ve tested so far.

If you go by the benchmarks, however, the Evo 3D actually comes off worse than the Sensation or Galaxy, achieving a score of 1819 in Quadrant (the Sensation got 1985 and the Galaxy S II got 2886). We’re not sure why the Evo 3D does so poorly here.

We’re ambivalent about the Evo’s display. It’s nice and bright in 2D mode, with decent viewing angles and outdoor visibility, but colours are noticeably warmer than we’re used to, with whites having a somewhat yellowish tinge. It switches over to 3D seamlessly whenever you view 3D content, but the transition back to 2D isn’t always immediate – sometimes it continues to display in 3D for a couple of seconds before switching back to 2D.

The 3D sweet spot, where the 3D effect is most pronounced, involves holding the smartphone further away than we normally would, and this position can be a tiring to maintain for longer than a few seconds. You also need to be looking at the screen head-on for the best effect, which limits your ability to share the screen with others. If you don’t hold the phone completely still, you’ll get an odd shimmer effect across the display that can be headache-inducing at best and nauseating at worst. Glass-less 3D can’t make objects jump out of the screen like they do in 3D cinema, but you do get a more enhanced sense of depth, making objects in the foreground pop out a little from the background.

There are three pre-loaded 3D clips to give you an idea of just how good 3D content can look, and while the results are impressive, they’re also filmed with professional 3D cameras rather than by the Evo. After playing with the 3D shooting options, we’re not convinced that it’s something we’d take advantage of on a regular basis. It’s fun for the first five or ten minutes, depending on how easily amused you are, but the limited sharing options mean you – and anyone else you want to show the content to – are limited to viewing content you’ve created on the Evo 3D only. You can upload 3D video to YouTube, but 3D photos don’t have anywhere to go and will probably just languish on your smartphone until you get around to deleting them.

Given the poor battery life that plagues most mid- to high-end smartphones, HTC should make a bigger deal about the Evo 3D’s superb staying power. The beefy 1730mAh battery was able to keep the smartphone running for just over 24 hours, and this was with extensive use of the camera for stills and video (both 2D and 3D), as well as a fair bit of web browsing, text messaging and phone calls throughout the day. With more moderate use, you should be able to stretch this to at least two days worth of use.

Conclusion
We’re sad to say, but the 3D feature on the HTC Evo 3D is nothing more than a gimmick. Shooting 3D photos and videos is good for a laugh, but it quickly loses its luster once you realise there isn’t much you can do with the content once you’ve created it. Watching 3D videos has a little more appeal, but there’s nowhere you can go to buy them – not even the built-in HTC Watch service. The more resourceful users may be able to find ripped 3D Blu-ray movies online, but these are all much larger than 4GB, which is the maximum file size supported by the Evo’s 8GB microSD card, and are ripped to 1080p resolution (the Evo only supports up to 720p playback).

That’s not to say that the Evo 3D is a bad phone. A large hi-res display, speedy performance and excellent battery life – not to mention the lovely HTC Sense 3.0 software – all amount to a great user experience that should please even the most demanding smartphone power users. Just don’t expect to use the 3D function much once the novelty has worn off.

The HTC Evo 3D is available from Telstra and Vodafone.