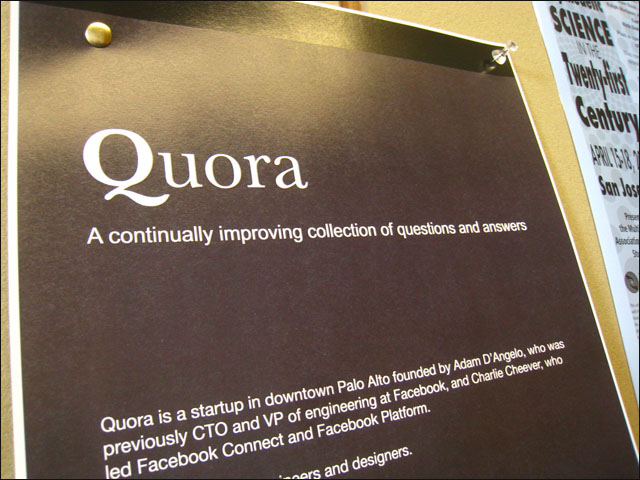 Not all next-generation web applications built in the rarefied atmosphere of California’s Silicon Valley successfully make it big on the global stage. For every Google, Facebook and YouTube, there are hundreds of also-rans; online innovators which are received with a universal ‘meh’ by the global community.

Not so with Quora. International use of the site has exploded over the past few months as the social knowledge sharing site has gone viral — and Australians have not proven immune to its charm, as the nation slowly works out how Quora’s innovative knowledge database can be used Down Under.

Like previous social networking giants Twitter and Facebook, Quora allows users to follow each other, as well as specific topics. And knowledge sharing sites have been built successfully online before — the most famous example is probably Wikipedia, but before the site was founded in 2001, Slashdot-associated site Everything2 started making waves with knowledge sharing back in 1998 and is still popular.

However, where Quora differs is that it forces users to interact via a highly structured question and answer format. Anyone can post any question, and anyone can respond to any question. But Quora only allows each user a single response to each question, and the site is geared towards avoiding the duplication of information, as well as prioritising useful responses.

Some of the most popular Quora questions so far about Australia have related to common national tropes which many have debated about the land Down Under for years. 22 responses have been garnered so far, for example, to the question of why Australians tended to be more attractive than British people, despite sharing much of the same genetic material.

Answers ranged from the serious — Australia’s better weather and higher focus on sport — to the jocular, with one wag claiming Australia’s convict heritage meant “they were so good looking that they made love all day instead of working, and had to steal to survive”.

Local recommendations for tourists are also proving popular, and over the past several weeks a number of questions have arisen with respect to Queensland’s disastrous floods.

Australia’s technology sector is also well-represented on the site.

In the US, a trend of relative celebrities (such as the chief executive officers of giant companies like Netflix and AOL) posting open and honest answers to questions on Quora has become evident over the past few weeks, and this trend appears to have spread to Australia.

Mike Cannon-Brookes, the chief executive of local software development company Atlassian, for example, answered a question directly on what the group’s current best-selling product was (its JIRA bug and issue tracking tool won out), and also popped up debating which city in Australia was the strongest for web startups. Mick Liubinskas, the co-founder of local startup incubator Pollenizer, has also been prolific in answering questions about the startup scene.

Some popular local topics dealing specifically with technology in the Australian context include debates about which are the best local fixed broadband and mobile service providers. Most agreed it was best to go with either Internode or iiNet, or sometimes TPG, for fixed broadband, but in the mobile arena Telstra’s Next G network came out on top.

And even local chief information officers are represented.

Ingenero IT manager Steve Berg has been actively posting in a number of areas, ranging from asking advice for a good virtual private network service to use with Amazon’s EC2 environment, to how the Kindle e-reading app on the Apple iPad compares with using a Kindle itself. Andy Pattinson, the IT director of cruise specialist Carnival Australia — also a Quora user — said it had become hard for him to ignore Quora, given all the tweets and articles he’d seen about the service over the past couple of months.

“Having checked the site out, it quickly becomes apparent there are volumes of genuine and insightful answers to some really interesting questions,” he said in a brief interview conducted through a Quora question.

“The first that caught my eye was a question about how new projects get proposed and agreed at Amazon. Really interesting to learn that it starts with the press release that would be published once the project is complete. A great way to ensure that what your working on is what your going to be excited telling customers about. If it doesn’t pass that acid test, go back to the drawing board.”

Pattinson said after that topic had piqued his interest, he’d started using Quora as a reference tool — but also just as an interesting source of information. He also liked that the site was built “intuitively” with the end user in mind.

Key for the site as Quora develops will be its team’s ability to keep it as free of spam and what Pattinson described as other “nonsense” as possible. The site does feature an ability for users to downvote and eventually bury answers to questions that are not useful, and a quick scan of a number of questions revealed that many whimsical or humorous responses to questions were hidden this way.

There’s no doubt that a number of questions remain about Quora; not the least of which is its revenue model, it’s ability to scale and its ability to remain useful as its knowledge database grows.

In addition, Australians have recently faced a sobering reminder that some next-generation web sites have time limits to their usefulness — with the local retrenchment last week of much of the Australian team driving the growth of social network MySpace, which was extremely popular Down Under just a few scant years ago.

But for now, Quora is the flavour of the moment. And Australians are jumping in and getting their hands dirty in droves.