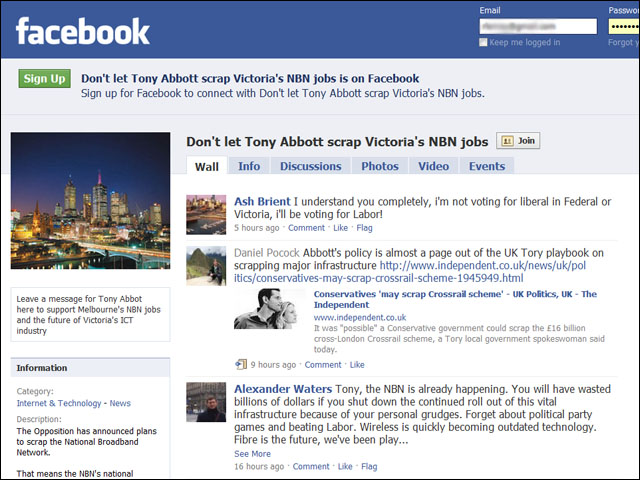 Victorian Premier and Labor stalwart John Brumby yesterday issued a statement noting he had created a new Facebook group where Victorians concerned about the Coalition’s broadband policy could make their feelings known.

“If Tony Abbott gets his way he’ll scrap the National Broadband Network and the 700 highly skilled jobs that are set to be based in Melbourne’s national operations centre,” said Brumby.

“Melbourne is regarded as the ICT capital of Australia and with the hub of the National Broadband Network we are set for an exciting future. But this future is under direct threat from the Liberal and National parties. Tony Abbott doesn’t understand the internet and obviously doesn’t care about Victoria’s ICT jobs.

So far the Facebook group has attracted 131 members and a number of comments. However some of them are comments from ALP loyalists — for example Victorian Legislative Council member Jaala Pulford and Victorian MP Martin Foley.

“The National Broadband Network is more than better download speeds – it means isolated Victorians can keep in contact better, businesses around Victoria can compete better on the international stage, we can deliver better education to our classrooms and medical researchers can work together better to fight disease,” Brumby said.

“Over 230 Victorian cities, towns and suburbs will be left with a second rate internet service under Tony Abbott, holding back Victorian businesses and putting Victorian jobs at risk.