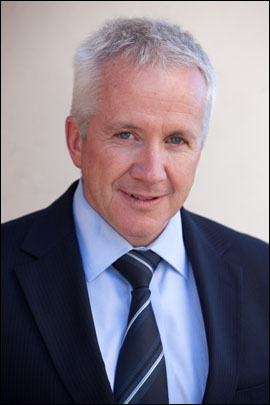 Senior NBN Co executive Kevin Brown (pictured) has used an internal company-wide email to reject the Coalition’s slur that it will be unable to find high-quality staff and is a “stodgy government bureaucracy”.

“Many of them will go oversees. They will not go and join a stodgy government bureaucracy with all its rules and bureaucracy and dictate to the Australian community,” said Robb as he aided Shadow Communications Minister Tony Smith in outlining the Coalition’s own broadband policy – which would see NBN Co disbanded and its hundreds of staff lose their jobs.

“I assure you that public comments by the Coalition opposition about the talentless people at NBN Co in a “stodgy government bureaucracy” are not views expressed to me by many other players in the Australian business community or global technology companies,” he said.

Brown pointed out that with regard to NBN Co’s “top 100 employees”, over half of the group had two university degrees (including four doctorates), 53 had worked in senior telco sector roles in Australia and overseas, over 15 percent had worked in top roles in “globally recognised companies”, including ASX50 companies and 27 were engineers by training.

In addition, seven out of NBN Co chief executive’s eight direct reports had lived and worked overseas in the global telecommunications industry.

“If the university system, all major telcos in Australia, the global technology supply companies and a number of ASX50 companies produce no talent then NBN Co may be “talentless”! I think not,” Brown added.

There have been few known leaks to the media from within the ranks of NBN Co since it was formed a year ago, but Brown appeared to hint that some staff may want to speak out in view of the Coalition’s threat to disband the fledgling company.

“The Federal Election and its focus on broadband policy is a confronting time for all of us at NBN Co,” he said. “I am aware many of you hold views about the right way forward for Australia, with an effective industry structure, where NBN Co can deliver cheap, equitable access to real high speed broadband for every Australian.”

“These are passionately held views we should each have, however at this time, I ask you to continue to be circumspect in the public airing of your views and allow Mike Quigley to represent NBN Co’s views with one voice. Our job is to stay focused on how to cost-effectively deliver the network despite the intense speculation about both broadband and NBN Co’s future.”

Brown thanked the staff for their hard work and professionalism in these “unusual times” for NBN Co and asked staff to stay focused on the job at hand.