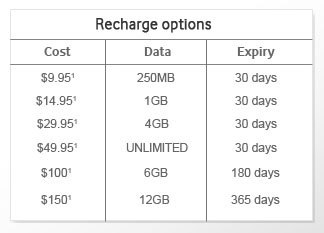 Mobile carrier VHA has launched its iPad data plans ahead of the launch of the Apple tablet in Australia on Friday, with the most notable feature being an unlimited prepaid data plan through its Vodafone brand for at a cost of $49.95, with the data expiring every 30 days.

Like Telstra, Vodafone will only offer iPad customers pre-paid plans, not monthly ongoing plans. The company’s iPad plans range from $9.95 for 250MB of data all the way up to the unlimited plan for $49.95, as well as two recharge options at $100 and $150 that offer 6GB and 12GB of downloads respectively, with the data expiring at 180 and 365 days.

For the $49.95 unlimited plan, Vodafone stipulated that customers must not use the plan for peer to peer downloading – for example over services such as BitTorrent.

The plans which VHA will offer through its ‘3’ brand differ remarkably from the Vodafone options. There is no unlimited recharge option, and 3 will offer both pre-paid and post-paid options for iPad data access. 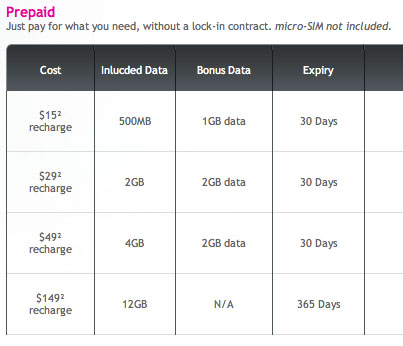 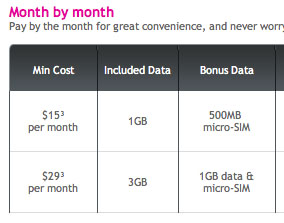 The pre-paid plans range from $15 for 500MB of data up to $149 for 12GB of data. The lower three recharge options will have their data quota expire after 30 days, while the $149 recharge option will expire after 365 days. 3 will send customers the micro-SIM card which the iPad requires for free.

3 has two iPad monthly plans – one priced at $15 per month and including 1GB of data, and one at $29 per month with 3GB of data. It appears as if customers will receive a bonus 500MB or 1GB of data respectively if they buy their micro-SIM card from 3.

Telstra and Optus have also released their iPad plans. It appears that like the other telcos, VHA’s brands will not sell the iPad directly. Instead, it will be available from Apple retail stores, at the company’s web site and from selected Apple third-party retailers.