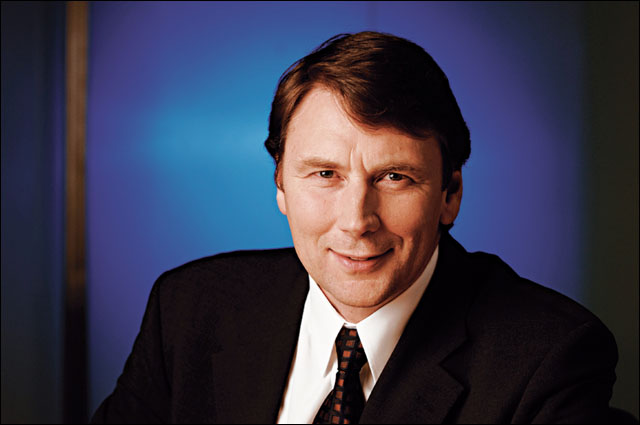 opinion If you believe what you read in most of Australia’s media, Telstra chief executive David Thodey is just one step away from sinking into the hideous quagmire of corporate oblivion.

Popular opinion has the CEO under siege from all fronts. The government may split up Telstra, or force it to divest its Foxtel assets, or make it give up its customers to the National Broadband Network – or all three. Financial analysts have issued a string of downgrades, senior executives are departing and of course the share price continues to sink downwards. By all accounts, Thodey should feel as though the weight of the world rests on his shoulders.

Funny how instead, he looks like he’s having the time of his life.

I was sitting at the back of the room on one of several tables filled with journalists this afternoon at a major business lunch held by the Trans-Tasman Business Circle, at which Thodey was the main speaker.

During his speech, I watched as those around me started frantically scribbling in their notebooks every time the executive uttered the word “NBN”. And indeed, Thodey’s comments on the subject of Australia’s biggest technology investment ever made their way into a number of articles about the speech.

But I never felt that Thodey really gave away anything of real substance about the progress of Telstra’s ongoing negotiations with the Federal Government and NBN Co on the terms under which the telco might migrate its customers and infrastructure into the broadband project.

Instead, what fascinated me was Thodey’s manner. His style. His self of himself, his humour and his poise as he first delivered his speech and then proceeded to take many questions from the audience.

The executive’s first action upon taking the stage was in fact to defuse some of the fevered speculation about the future of Telstra, standing as it does in the shadow of the NBN.

Noting he would focus on the potential of mobile broadband in Australia, Thodey cautioned the audience that his comments should not be taken as a veiled commentary on the fixed fibre nature of the NBN. “I know there is some media here, and they may sometimes get a spin on things that may not necessarily be right,” he said, to general laughter from the floor and raised eyebrows from the 20-30 journalists in the room.

The CEO then proceeded to discuss the phenomenal growth in mobile broadband usage – a favourite topic of Australia’s telecommunications industry.

But where most speeches of this nature are a naked product pitch, Thodey’s was speckled with good humour and the latest gadgets and innovations. In short order he brought out what appeared to be one of Telstra’s super-hyped HTC Desires and name-dropped Google’s awesome Goggles application for it, as well as the “enormous growth” of Twitter, the 4Square geographical networking services, IPTV and more.

Much of the business audience appeared to have no idea what Thodey was talking about. But then that has always been one of Telstra’s primary roles in Australia – to introduce new technology to this market. A Trans-Tasman speaker made the point later on that it was Thodey who first demonstrated the BlackBerry to the same audience a number of years before.

Thodey’s piece de resistance was an an actual Apple iPad – “smuggled” in from the US ahead of its local launch on Friday week. “Is Tony King here?” he asked, referring to the managing director of Apple Australia.

Throughout this process, the executive appeared to be having the wildest fun. Like Apple’s own Steve Jobs, he relished his role in the limelight pulling piece after piece of magical technology from his kitbag and making it seem like a piece of delicious and exclusive cake. And the audience ate it up.

At several points he openly referred to NBN Co CEO Mike Quigley – who was in the audience – saying the executive should come up on stage and help him to explain various issues. The mentions went far to further defusing the level of tension which is generally believed to exist between NBN CO and Telstra – but which in practice may not.

But it was during the question and answer session – where written questions were passed up to the moderator, rugby supremo and former Fairfax Media chief executive David Kirk – including, as Thodey acknowledged with a broad grin, “some questions I may not want to answer” – that Thodey really hit his straps.

At this stage, the Telstra chief’s performance took on the atmosphere of a fire-side chat with a close circle of his most intimate friends – despite the antagonistic nature of the questions being asked. No matter what the audience threw at him, he defused the tension and then made them smile.

“I’m a long-suffering Telstra shareholder (from T2 and T3), and my shares are not what I would like them to be,” stated one audience member. “Me either,” cracked Thodey back. Asked by one complainer why Telstra’s cable network was “getting worse”, Thodey invited them to put their hand up so that Telstra could identify them, his wicked grin seeming to imply vans full of Telstra strongmen in black suits knocking on their door.

“We have ways to get you,” he laughed, before admitting seriously that the problem could be a “hog” in the customer’s neighbourhood. “You need to work out who they are,” he joked. “The culture of Telstra … That’s a big question.” he mused later on, before asking: “Let’s see, how many Telstra people are here today?”, winning a laugh from the crowd.

In short, everything about Thodey’s approach to the event screamed that he is enjoying his position in life to the absolute maximum. That he loves running Australia’s great warhorse of a telco and wouldn’t give it up for anything. That he really believes in his mission to take back the hearts and minds of Australians and stop them using the word “Telstra” as a swearword.

Like Barack Obama, Thodey has perfected the art of paternalistic, self-effacing warmth. You cannot help but be charmed by his open, honest and – above all – wry demeanour.

If you speak to people in the industry about Thodey, you may get some insight into what’s going on here.

I have heard a few people say that the executive had a tough time in his previous corporate life leading IBM Australia, especially when it came to dealing with Big Blue’s top management in the US. This, I believe, reflects the fact that American companies often do not understand the subtleties of operating in Australia.

When you examine Thodey’s understated style – for God’s sake, early in his leadership of Telstra it was revealed that he still drives a Corolla, of all things – and his ironic and self-deprecating style of humour, you will find one of the most thoroughly Australian executives that it is possible to meet in top management circles around the nation.

Knowing that context, it is not hard to see why he would relish the chance to lead one of the most quintessentially Australian companies Down Under. He likely sees himself as its saviour, the bright light that is burning in the deathly silent darkness left by the arrogance of his predecessor Sol Trujillo. Trujillo was the surgeon who cauterised Telstra from the wound of Government. But Thodey must see himself as its healer.

If you have this sort of positive mindset, you start to view everything as an opportunity rather than as a threat, and you start to want to make things better without hurting others. You can see this in a thousand different tiny actions Thodey has taken since taking on the CEO role at Telstra.

A few examples would be his moves to reach out to the company’s unions, his constant focus on customer service, the deletion of the company’s poisonous Now We Are Talking blog and the establishment of its friendly replacement, Telstra Exchange, and even the launch of the HTC Desire handset and revamp of pricing on virtually all of Telstra’s broadband plans — including mobile.

The CEO was asked today whether his personal style – “distinctly different” from that of his predecessor – was a liability when making tough decisions or negotiating. In response, he said that he didn’t believe tough decisions needed a tough exterior – and that people ‘needed to be true to themselves’.

Truly, it would be hard to imagine that Thodey’s performance today at the Trans-Tasman Business Circle was an act.