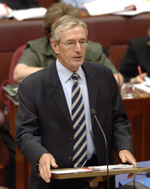 Former Shadow Communications Minister Nick Minchin, who is still one of Stephen Conroy’s most virulent opponents in the Senate, has reportedly confirmed plans to retire from the Opposition front bench, saying he won’t contest the next Federal election.

Multiple outlets (notably the ABC and the Sydney Morning Herald) are reporting the news, although Minchin’s spokesperson was not immediately available to confirm the story. Minchin will abandon his portfolio responsibilities immediately.

It has been reported that one factor in Minchin’s retirement was the need to care for his son, Oliver Minchin — who was recently involved in an accident which resulted in severe injuries.

Minchin has had a strong involvement in the telecommunications portfolio for many years. As Finance and Administration Minister in the Howard Government, it was Minchin who was broadly responsible for privatising Telstra through the years from 2001 through 2007.

Bruce Billson won the Shadow Communications Minister role after the Rudd Government’s election victory in November 2007 but lost it less than a year later, with Minchin taking the portfolio with the elevation of Malcolm Turnbull to Leader of the Opposition.

Despite the fact that lower house MP Tony Smith landed the communications portfolio in December 2009 following Tony Abbott’s victory over Turnbull, it has been Minchin who has fought Conroy strongly in Parliament most recently, perhaps due to his role as leader of the Liberal Party in the Senate.

For example, over the past few weeks Minchin has repeatedly lambasted Conroy over his legislation to reform Australia’s telecommunications industry and backed Greens Senator Scott Ludlam’s successful motion for the Government to produce the controversial National Broadband Network implementation study.