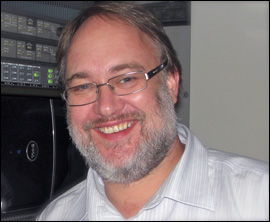 Nobody could ever accuse the Playroom‘s head of technology Craig Armsworth of not putting his whole effort in — not only has he worked for 20 years for companies like Disney and Sony Pictures, but he also has four children under the age of 12! We wonder how he ever finds time to play with the technological “toys” he loves.

My first “real” job after University was manager of technology for a small start-up in Sydney catering for commercial software applications for business communications and hardware for broadcast & post production.

“Toys-for-the-boys” is the draw card for my role; the constant advancement in technology has the result of constantly evaluating the new technologies and whether they will make significant difference to productivity, the bottom line or open up new areas of opportunity for the enterprise. It’s like Christmas every day.

With four children under the age of twelve, finding the time to indulge in personal hobbies is limited. I get enormous pleasure in being involved with the kids after school activities, the Saturday sports and the like. When I do find some time I gravitate to reading or immersing myself in strategy and simulation games.

We are constantly seeing new devices geared at keeping us informed and in touch and the advancement of these technologies will be at the forefront in the coming years, whether it is the device for the consumer or the business of providing new content or applications to the consumer.

In Australia viewing patterns and offerings will move to IPTV and SVOD models though this will be restricted until the Australian government’s NBN is realised. Until then we will see even higher penetration of Apple’s iPhone and the recently announced iPad and competing technologies as a part of everyday life.

The introduction of IT technology to facilitate linear broadcast television has probably been the biggest influence in my career. The advent of these broadcast automation systems has enabled me to not only establish a niche within the industry (having rolled out a significant number in the region), but also investigate where technology adoption or development can improve business.

The founding father of modern broadcast automation, Ken Louth, has thus been the biggest inspiration in my career.