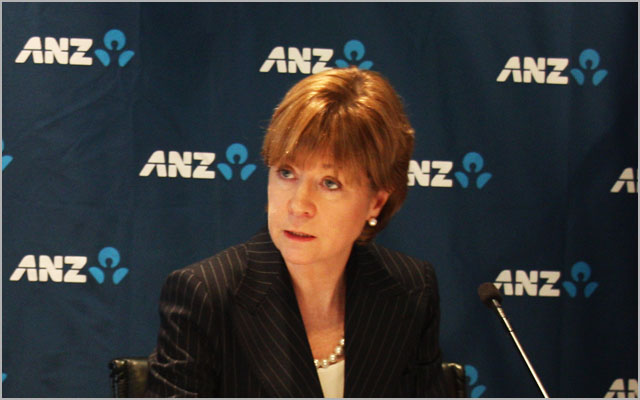 ANZ Bank chief information officer Anne Weatherston has rejected claims the bank’s technology platform was falling behind that of rivals, stating billion-dollar IT splurges by the likes of the Commonwealth Bank in recent years were necessary because of a lack of ongoing investment in technology infrastructure throughout the past several decades.

ANZ is the only major bank in Australia to have consistently rejected the need for core banking modernisation over the past few years.

The most high-profile project in the space is CommBank’s gargantuan $1.1 billion core overhaul, conducted over the past three years in coalition with technology partners SAP and Accenture. However, NAB’s own Oracle-based project is currently gaining a full head of steam, and even Westpac has long-term plans to tackle its core platform, using learnings gleaned from its acquisition of St George, which already operates a relatively modern system.

In March, CommBank CIO Michael Harte and other CBA leaders conducted a briefing on their overhaul in which they repeatedly emphasised that the project had put the bank between two and five years ahead of its rivals, allowing real-time transaction functionality and the speedy deployment of new financial products. However, the initiative has also proven costly. The cost of the CommBank overhaul was initially pegged in 2008 at $580 million. Since that stage it has since received several additional cash injections — with its budget rising by $150 million following its acquisition of BankWest, and then by a further $370 million in February this year.

Last week, in her first broad public briefing since taking the job as ANZ CIO in November 2009, Weatherston said CommBank was only investing so heavily in the project because it had to.

ANZ had upgraded much of its platform in the 1990’s, the CIO said, particularly building what she described as an “embryonic integration layer” on top of its systems which is still used as an interface between high-level systems and the bank’s underlying core banking architecture. That layer, Weatherston said, was “still very usable”, in terms of integrating channels and customer applications into ANZ’s offerings.

However, she said, it was also something that “CBA didn’t have”.

One of the main benefits of its overhaul, according to the Commonwealth Bank, is that it allows for what it describes as ‘real-time banking’. For example, in an ideal real-time banking world, transfers between customer accounts would occur instantly, even between banks — without the need to wait for overnight clearance, as is currently standard in Australia’s banking sector.

In response to a question about the issue, Weatherston said ANZ already had real-time banking — and had had it for “nine years” in Australia and New Zealand. “We can offer the same proposition as CBA”, the executive said — but unlike CommBank, the bank hadn’t chosen to focus on promoting the technology benefits to customers.

In response to a question about real-time banking, Hodges said what was important for the bank was keeping its eye on the ball in terms of customer priorities. “It’s about meeting customer need,” he said, noting that for many customers, real-time banking wasn’t particularly a priority, compared to other potential upgrades the bank could be working on.

“The issue for us is that we’ve got a business strategy which we’re following,” said Hodges. “I’m sure that what CBA is doing in terms of managing their business is right for CBA. What we’re doing is right for us. I’d also say that maybe our systems were in different states as well.”

Where most banks tend to standardise on one internal core banking platform (for example the CBA’s use of SAP and NAB’s project to implement Oracle), ANZ currently has three different core banking systems. In Australia, the bank uses CSC’s popular Hogan platform, which is also used at St George. However, it has increasingly rolled out Infosys’ Finacle platform throughout the Asia-Pacific region as it has expanded its operations, and in New Zealand the bank recently consolidated onto the Systematics platform by FIS.

Unlike Harte at CommBank, Weatherston does not believe ANZ’s business strategy will be impacted by continuing to use its existing systems. “We will continue to have three cores, our business strategy does not require us to replace them,” said Weatherston last week. “Over the next few years, we will not be constrained by our core systems.”

ANZ would continue to focus on outcomes such as new business propositions and better customer service, Weatherston added. However, these outcomes “can be developed by integrating into our existing technology solutions.” “As a result,” the CIO added, in a possible dig at CBA’s SAP focus, “our technology roadmap looks a lot more complex than a single one-box vendor solution”.

ANZ isn’t planning to immediately overhaul its core banking platform. But what is it doing? Stay tuned as we continue to do a deep dive this week into what the bank has in store for its IT strategy.