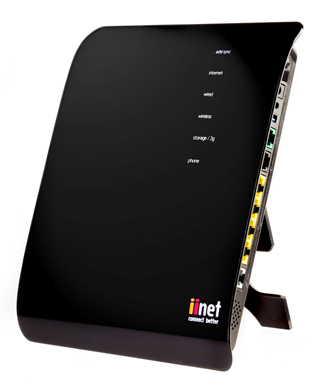 The device is the first to be designed in the company’s fledgling engineering labs, and looks set to be rolled out to at least tens — or even hundreds — of thousands of Australian households, with iiNet recently blitzing Optus to become the nation’s second-largest provider of ADSL broadband.

But the question remains — can iiNet’s first in-house developed device compete with the big boys — Linksys, Belkin, NETGEAR, and even the FRITZ!Box being marketed by Internode, or is this first effort from the Australian company a lemon?

Design
Like the original BoB, the BoB Lite is built from black plastic — shiny and curved on top, and flat and matte on the back. It comes with a stand, although we honestly can’t see most people using it — as it seems a little superfluous to the device’s design, and may even make it slightly unstable when you plug half a dozen cables into it.

On the top of device are a series of embedded LED status buttons, covering all the usual areas for an integrated router — ADSL sync, internet connectivity, wired and wireless connections and even telephone status. One unusual light shows the status of the router’s USB port — which can be used to connect up storage devices or 3G mobile broadband dongles. When you turn the BoB Lite on, the lights will show either a dull red (not working) or blue (working) light to show status — or simply nothing if that aspect of the router has not been set up.

On the router’s right-hand side can be found its collection of ports — 1x ADSL, 4x 10/100 Ethernet, 1x PSTN failover (in case the normal Voice over IP line stops working), 1x VoIP line for iiNet’s iiTalk service, 1x USB storage/3G port and 1x 12W/1.5A power input. There are also two buttons — one to reset the router back to base settings, and an on-off toggle. It’s all pretty standard for an ADSL router in 2011 (or even 2009).

On the bottom of the device is a ‘WPS’ button, which we believe is to support its Wi-Fi Protected Setup feature. The actual device comes with two telephone cables, a yellow Ethernet cable, the small power supply unit and an ADSL line filter for those that don’t have naked DSL.

Overall, the BoB Lite is more stylised than most routers; Its stand-out black finish (you can see yourself in its top!) and curves will help it to fit in unobtrusively with a home entertainment system setup, for example. Avoiding the PC industry’s obsession with beige cases is definitely a good thing.

However, like most modern routers, the BoB Lite also feels cheap. Its plastic is not quality, the device feels a little too light to really be stable, and there really wasn’t much ventilation on offer. This isn’t a business-class device, and it doesn’t represent the high end of town in ADSL routers.

Features
To be honest, the featureset of the BoB Lite is about as standard as you could expect from an ADSL router in 2011, with a few exceptions.

All of the basic router functions — a web-based interface, firewalling, DHCP support, NAT IP address sharing, support for ADSL2+ speeds and 802.11b, g and n Wi-Fi access and so on — are here — as well as quality of service support, VPN pass-through and so on, and the BoB Lite also adds functionality for more advanced users such as virtual local area network and server and DMZ zone support. The support for USB devices and 3G modems is also a welcome addition, although we’re not sure how much use it will see.

However, to be honest, these are all par for the course in 2011. To demonstrate what else is on offer, the FRITZ!Box 7270 being promoted by Internode at the moment currently also comes with integrated PBX functionality, as well as being able to function as a base station for six cordless phone handsets, and even an ISDN port. It also does so in a smaller package.

The FRITZ!Box also supports version 6 of the internet protocol — a feature which is speedily becoming a must-have for home and small business broadband routers. The BoB Lite does not support IPv6 — although iiNet says the feature can be added via a software update in future.

Critically, however, the BoB Lite does support the TR-069 standard being used by iiNet to ensure uniformity of service delivery across its network — meaning iiNet’s staff can configure the device remotely, and it will support delivery of iiNet’s fetchtv content through its IPTV set-top box (reviewed here).

One other feature which the BoB Lite is listed as coming with is the ability to automatically retrieve a user’s login and password details from iiNet’s servers when you connect the device and switch it on. However, it is not locked to iiNet — you can also use the device on the networks of other providers.

For starters, the device didn’t automatically pull our login details from iiNet, so we had to enter them manually. In addition, the BoB Lite didn’t connect to our iiTalk Voice over IP line — but that could just be because it has been experiencing periodic issues connecting ever since we moved apartments (up two flights of stairs) a few months ago.

In addition, iiNet has pre-configured the Bob Lite so that its Wi-Fi connection is active, but with no security controls such as WEP/WPA encryption or MAC address filtering in place. We were easily able to connect several Wi-Fi devices to it without the need to verify them — and then started browsing the internet.

It gets worse, however. Wi-Fi users are also able to access the Bob Lite’s internal web-based administration system, which actually tells users the default password, which is “admin”, when you open it — and the admin page’s default IP address isn’t exactly hard to guess, either, as it’s the same as the router’s — 10.1.1.1.

This means that it would be extremely trivial for an attacker to attack a BoB lite if a user leaves the router configured as iiNet has shipped it. It is hard to believe that the company has left the device this wide open by default, and it deserves condemnation for doing so. Sure, the security settings can be changed, but our guess is that most people won’t do so straight away — and even a two minute window with these settings active is enough for a BoB Lite to be compromised.

In addition, we experienced several other issues with the BoB Lite.

Firstly, the device got quite hot on its bottom — adding to our suspicion that it’s not adequately ventilated. We tested it on a 35 degree day in Sydney, representing unusually hot weather for the NSW capital, but a standard Australian summer for much of the rest of the continent.

Because of the temperature, we’d recommend you keep the Bob Lite under the air condtioner during summer if you live somewhere like Broken Hill.

Secondly, while the administration interface was more than satisfactory for the average home user, much of the technical detail was obscured, and we had to poke around a little to get into its guts. This is understandable, given the BoB Lite is aimed at the mass market, but if you’re a power user, this is likely not the device for you.

And finally, we’d really like to see gigabit Ethernet as standard on consumer-grade routers/switches like the BoB Lite in 2011. With the National Broadband Network on the horizon and most medium to high end laptops and desktops supporting gigabit these days, 100Mbps is just not enough.

Once we got past these hiccups, however, the rest of the BoB Lite experience was pretty good. The Wi-Fi signal was clear across the house, and files transferred speedily — although we didn’t have a 802.11n device on hand to test out its full speeds. ADSL latency and speed was very similar to our existing iiNet-branded Belkin device, as well as other NETGEAR kit we’ve used on our home connection, and overall things just worked and were stable over the several hours we tested the BoB.

One other note — we didn’t test the Bob Lite’s 3G modem add-in functionality, as our Telstra Next G dongle is a little bit … temperamental, and we suspect it is extremely unlikely that it would work with Bob Lite, given how reliant it is on Telstra’s custom drivers and authentication system. However, we did slot a few varieties of USB keys into the USB port — which were all detected fine.

At just $69 on a 24 month contract with iiNet, or $99 with no contract, the BoB Lite is an absolute bargain for what you get in the package. A quick comparison with the dozens of alternatives available through online retailers like AusPCMarket demonstrates that it’s extremely rare to find a decent ADSL router with the same features as the BoB Lite for the same price.

Conclusion
It ships in an insecure state, it doesn’t have the top-of-the-line features power users want, and it might get a bit hot under the collar when you start pushing some serious bits through it. But there’s no doubt iiNet is onto a winner selling the BoB Lite to Australia’s mass market.

The device is priced exactly right — it’s almost too cheap for what you get in the package — and it’s got all the features that most users will want; even going a bit further than is really necessary in some areas. If your parents, older relatives or even your university student cousin needs an ADSL broadband router which just works on iiNet’s network and is easy to support, get them a BoB Lite. You won’t regret it. The BoB Lite and the original BoB can be bought directly from iiNet through its web site.