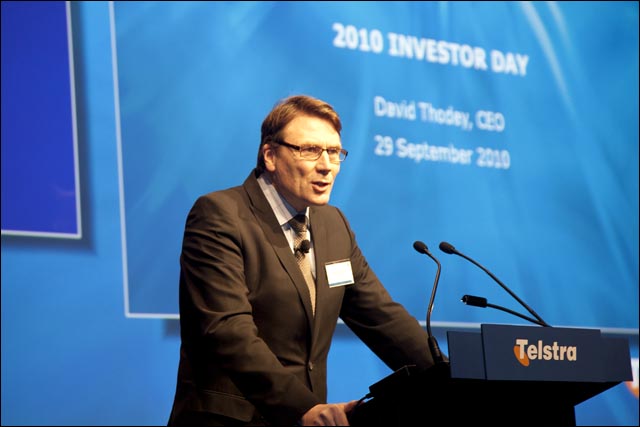 Telstra chief executive David Thodey today said he had not been contacted by Internode managing director Simon Hackett in relation to the smaller telco’s ongoing complaint about Telstra’s wholesale prices.

Late last week Internode managing director Simon Hackett again speculated that Telstra Wholesale was giving some retail internet service providers better deals because they hadn’t built out their own competitive broadband infrastructure as some, like Internode, TPG and iiNet had.

Internode is locked in pricing discussions with Telstra Wholesale that Telstra has so far declined to comment publicly on due to their sensitivity, and the pricing issue was also raised with the Australian Competition and Consumer Commission after Telstra dramatically chopped broadband prices earlier this year.

However, at Telstra’s annual investor day today, Thodey told journalists the issue hadn’t crossed his desk. “If any access seeker is unhappy, they have not contacted me,” he said.

The Telstra chief executive said in relation to the issue that according to industry regulation and “under law”, Telstra was required to be fair and equitable to all of its retail internet service provider customers, despite the fact that such companies competed with Telstra’s own BigPond ISP brand.

“We are very diligent about doing that,” he said. “We will continue to be absolutely vigilant in being fair and equitable in that wholesale environment.

The telco’s price changes, as well as recent bundling and customer service efforts, however, have already gone some way towards aiding its attempt to claw back market share in the fixed-line broadband market. Today Telstra revealed it was no longer losing consumer fixed broadband customers — reversing a trend of market share loss that had been stinging the customer over the past few years.

There has also been discussion in Australia’s telecommunications sector recently about the rapidly shrinking ranks of broadband providers.

In August iiNet chief Michael Malone said there were only four and a half “meaningful” players left in Australia’s ISP market — consisting of Telstra, Optus, iiNet and TPG, with Internode being the “point five”. The market has recently consolidated down to a shortlist of key players, with iiNet especially acquiring to bulk up its customer numbers.

Thodey was asked directly about the issue this afternoon, and whether he thought the diminishing numbers of players would affect competition, and ultimately, consumers. But his answer was brief.

“I think there’s very active competition in the market,” he said.