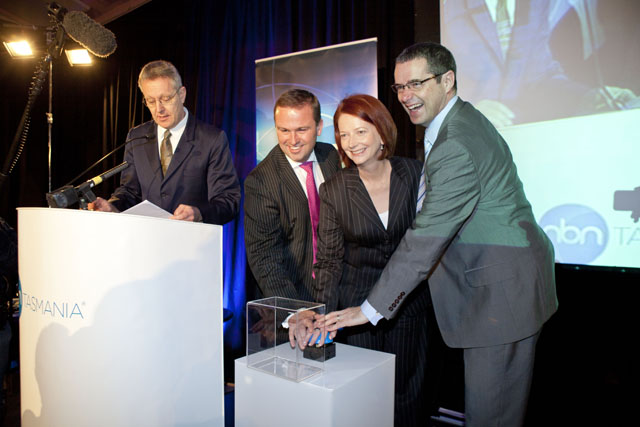 Prime Minister Julia Gillard today intensified Labor’s election focus on the National Broadband Network through a trip to examine the start of construction of the network in Townsville, as the Coalition continues to face questions from the community about its own broadband vision.

“We are here watching the rollout of the National Broadband Network,” Gillard told journalists. “And of course, delivering the NBN is part of my better economic plan for this country’s future. The NBN means more jobs. It means that we can compete with countries around the world like Singapore, like Korea, like Japan.” (The photo above is of Gillard launching the NBN in Tasmania last week)

The Aitkenvale and Mundingburra suburbs of Townsville will receive NBN fibre services earlier than most of the rest of the country as they are part of the first release category of construction sites that NBN Co will use to test the water and gain experience before rolling out the network nationwide.

However, as early as next week, construction could simply cease, as the Coalition’s own broadband policy calls for the NBN project to be abolished and its assets sold off to the private sector.

Local Labor candidate Tony Mooney seized on this fact this morning when discussing the NBN alongside Gillard. The seat of Herbert in Queensland which he will contest this Saturday is currently held by Liberal National party MP Peter Lindsay, who is retiring.

“On Saturday, unless I’m returned and the Labor Government is returned, this rollout here in Townsville will stop immediately,” he said. “It will not go forward.

Gillard’s deputy Wayne Swan — also at the launch said local chambers of commerce could not understand the Coalition’s plan under Tony Abbott to “rip it up and go back to horse and buggy communications”.

“This is a vital issue on Saturday in the election,” Swan said.

However, Gillard did not directly answer several questions about the NBN when questioned on the matter at the event. On the matter of how many premises a Labor Government would connect by the time of the next election, the Prime Minister pointed to coverage maps on NBN Co’s website.

“This is going to be completed in 12 weeks’ time, with switch-on after that,” she said of the Townsville rollout.

In addition, Gillard did not directly answer a question about how much an average family would pay to hook up to the NBN on a monthly or yearly plan — noting only that there was already price competition between early stage NBN providers in Tasmania.”

Even the show’s host, Tony Jones, questioned Abbott’s vision. “Listening to the many, many people suggesting the future is through faster broadband, have you thought to change your opinion on this at all?” he asked.

Abbott acknowledged the importance of broadband, but once again highlighted the higher cost of Labor’s plan and the high uptake in the usage of wireless services as an alternative to fixed broadband. “I think the best result is going to be by competitive markets than by a government monopoly … most of the people who you see making use of these services at the moment, are doing it via wireless technology,” the Opposition Leader said.

“All of the people who are using their BlackBerrys, their iPhones, their Facebook, all the people who are sitting in cafes and hotel rooms doing their work, they’re all using wireless technology, and we shouldn’t assume that the only way of the future is high-speed cable.”