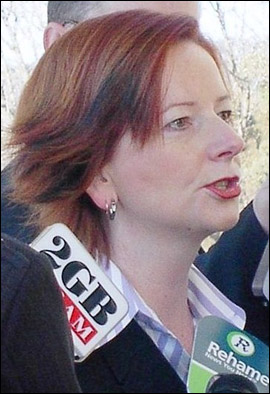 A re-elected Gillard Labor Government will put its hand into the $1 billion dollar Gershon-funded honey pot — a fund reserved for government Information and Communications Technology (ICT) projects — to fund other election promises.

“The Gillard Labor Government will also remove funding currently quarantined under the Gershon reforms for Information and Communications Technology (ICT) spending across Government, saving $447.5 million over four years.” The Updated Net Budget Impact of Election Promises press release stated on the ALP news site last Saturday. To our knowledge, this story was broken by the AustralianIT.

The Gillard Labor Government plans to remove the quarantine currently on the fund and reassign $447.5 million of savings to put towards Labor’s election promise to returning the budget to the black.

“Going forward, departments will now have to bid in the budget process for additional resources to fund ICT spending to ensure it is properly scrutinised against other government priorities,” the release stated.

After the Gillard Labor Government re-diverts the nominated fortune mentioned, the $557 million remainder will be quarantined to fund government ICT projects as originally promised — “Half of these savings had been quarantined for new ICT spending across Government,” the statement said.

Back in August 2008, Minister for Finance and Deregulation Lindsay Tanner commissioned British efficiency expert Sir Peter Gershon to do analysis of Australian Government ICT projects and business as usual spending.

Several months later Gershon presented his reform recommendations, which were subsequently approved by the Goverment to create an ICT Reform Program. The program has driven savings of over $1 billion that feed into the Gershon fund and are reinvested into the ICT industry by the way of government projects expenditure.

The Coalition is also threatening to hurt the ICT Industry if elected in this election. Opposition Leader Tony Abbott has announced that he will scrap the the National Broadband Network (NBN) — a move that Minister for Broadband, Communications and Digital Economy Stephen Conroy has called “reckless”.

Abbott also threatened to abort the $467 million Government e-Health project and and the $2.4 billion school laptop project if elected.