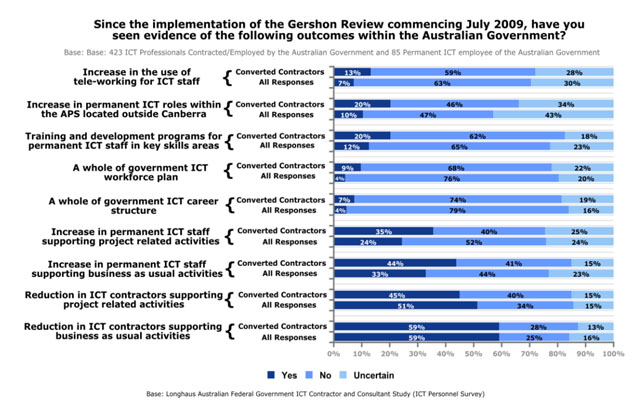 Reforms stemming from Sir Peter Gershon’s review into Federal Government technology use cost local IT contracting companies combined losses of $147.5 million in their first year, the authors of a new study into the Gershon review have claimed.

The Gershon review was released in October 2008, containing among other recommendations, the British efficiency expert’s finding that the Federal Government needed to drastically reduce its reliance on outside IT contractors, and improve its use of internal staff.

But a report commissioned by the Information Technology Contract & Recruitment Association (ITCRA) and carried out by analyst firm Longhaus has found that such moves might have backfired, with the 324 companies servicing Canberra’s public sector suffering as a result of the reforms.

“Since the implementation of the Gershon Review commenced, these firms have experienced combined averaged losses of $147,500,000 in the first year,” the report states. “Should this trend continue for the 2010/11 period, then up to 146 companies servicing the Australian Government will be exposed to extreme financial hardship.”

The report found that overall, there was a total ICT workforce of over 10,244 person in the Federal Government — with about a third of that being contractors.

The recommendations of the Gershon report have seen “over 5,500 person-years” of experience and intellectual property redistributed within the Australian Government ICT labour eco-system, according to Longhaus. But, the analyst firm’s data showed that neither side has been able to claim benefit.

“Outside of the cost-cutting measures that Longhaus believe will provide little more than short-term impacts for the Australian Government, little quantifiable progress has been made on the systemic recommendations of the Gershon Review relating to improved governance, skills training and career planning at a centralised or whole of government level,” the report states.

To put together the report, Longhaus surveyed both IT labour suppliers and individual contractors. It received some 91 responses from the companies, and 423 responses from a population of about 10,000 Federal Government ICT workers — both contractors and permanent public servants.

The office of Finance and Deregulation Minister Linday Tanner — whose department has overall responsibility for delivering the Gershon reforms — has not yet responded to a request for comment on Longhaus’ report.

Image credit: Impact asssessment of the implementation of the ICT Reform Program on the ICT contingent labour market (Longhaus)