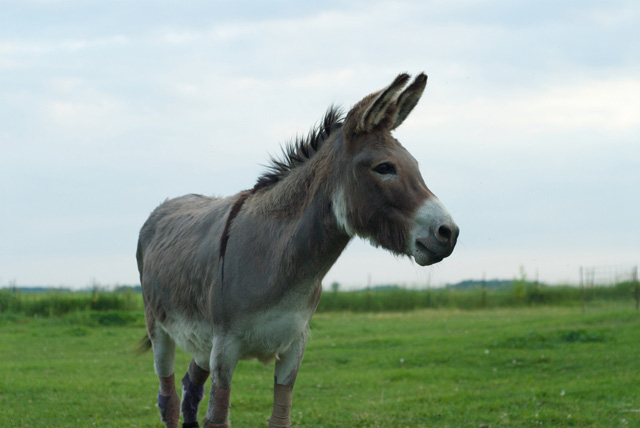 Oh dear. Radio shock jock Alan Jones appears to have gotten his wires crossed, in an analysis this week of how a new data speed record set by scientists in Germany might affect the National Broadband Network.

As Jones helpfully tells us (the full audio is available online, sponsored by consumer electronics retailer Bing Lee), the scientists at the Karlsruhe Institute of Technology, using a “laser”, have developed new technology that can send data at speeds of 26 terabits per second — for example up to 400 million telephone calls per second, or the data on 700 DVDs. This, Jones said, has some profound consequences for the NBN:

“The NBN that they’re going to roll out will be up to 100Mbps, down to 12Mbps in some areas … The Germans have done 26 terabits. that’s 26 million megabits per second. We’re going to get a hundred. Not a hundred million — a hundred megabits per second. Their 26 terabits is 2.6 million times faster than what we’re getting. And Canberra want us to believe that the technology we’re spending up to 60 billion on, won’t be updated by the time it’s rolled out. Of course, they’re kidding!”

Leaving aside the fact that the NBN will actually deliver speeds of up to 1Gbps, itself at least ten times faster than anything consumers can currently access in Australia … there is also the fact that the Germans are, of course, using the exact same technology as the NBN — optic fibre — and there is a solid prospect of such innovation eventually boosting speeds on the national network.

“Tests such as this just go to show why a fibre-enabled National Broadband Network is the best infrastructure for Australia’s future … As fibre optic technology improves, so too will speeds, and the amount of data that can be carried over the network we are building today. This gives us confidence that we’re delivering the right communications infrastructure to sustain our nation for decades to come.”

We can’t help but suspect the good chaps at NBN Co found this one a little bit amusing … judging by their seemingly innocuous re-tweet of a story run by News.com.au regarding Jones’ comments: 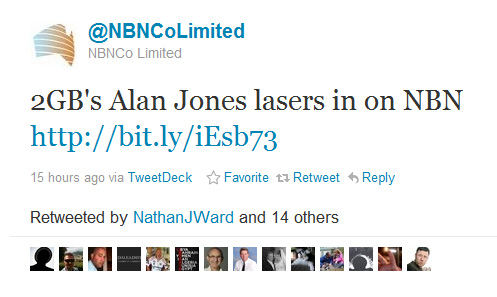 Personally I’m with Jones. 100Mbps? 1Gbps? Screw that — it should be every Australian’s right to have at least 10 terabits per second broadband to their house — maybe even 15. Gigabit, shmigabit. What is NBN Co thinking???