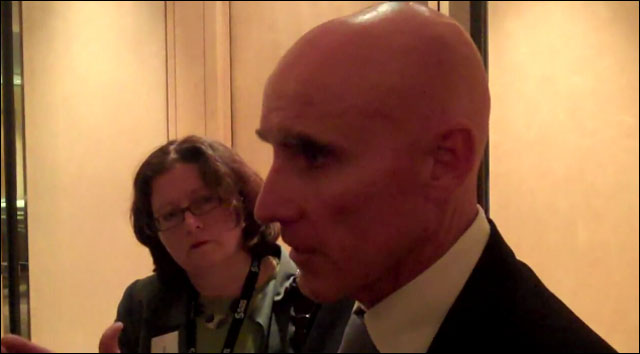 NBN Co chief executive Mike Quigley today provided a comprehensive overview of the fledgling fibre startup’s current activities — ranging from ongoing discussions with all players in the industry to the practicalities of rolling out a National Broadband Network.

Probably the biggest challenge the company faced right now, Quigley told the Communications Day conference in Melbourne, was implementing the operational and business support systems it will need to run its network and interact with the retail ISPs who will be its customers — and to bill them correctly.

NBN Co is in negotiation with potential suppliers for the systems “right now”, according to the executive, who noted that the company would have liked to simply go out and pick up a suitable system out of the box and plonk it down in its datacentre. “But it wasn’t possible, because nobody has built this kind of open access, wholesale Layer 2 network around the world,” he said.

The company is about to award a contract for optical transmission equipment, and is currently looking at “$2 billion” worth of proposals for the passive network hardware it will need. And procurement activities are also under way in areas such as datacentres, wireless and satellite networking.

Quigley said the company did pause some of its procurement activities during the election period due to public sector Caretaker Conventions, but started the work again “when things were clear”.

Another major body of work will see the company submit an extensive business case — as is normal for Government Business Entities like NBN Co — to the Government at the end of October. The document, according to Quigley, will also contain a three-year rollout plan for how the NBN will be implemented across the nation in the near term.

The fibre telco is also getting heavily stuck into construction of the NBN itself.

About 500 broadband services have been delivered to about 400 premises already in the early stage deployment areas in Tasmania, Quigley said today, although only about 170 of those are “active”. The first stage of the Tasmanian rollout had come in “on time and slightly under budget,” he said. It had hit some 4,000 premises in total in the three targeted towns.

On the mainland, NBN Co has started construction in all of the five first release sites around the nation, and is planning for another 14 and to expand the first bunch once they’re completed.

There’s also a lot of consultation going on at NBN Co — the company is having extensive discussions with the Australian Competition and Consumer Commission, as well as putting together a wholesale broadband agreement — a document that deals with how it will treat its customers to avoid discrimination.

And Quigley said the company has been listening very closely to industry responses to NBN Co’s three product overview specifications recently released — in the areas of fibre, wireless and satellite — and to retail service providers in general.

A lot of the focus on NBN Co in recent times has been around the political situation that the company was enmeshed in during the election cycle, when the Coalition had promised to shut the program down if it won power. Quigley appeared to be aware of the ongoing discussion.

“It’s a pleasure to be here,” he told the audience at the start of his speech, noting that as his flight to Melbourne had circled the city in thick fog this morning, the pilot had told passengers they would likely be forced to divert to Canberra instead of landing.