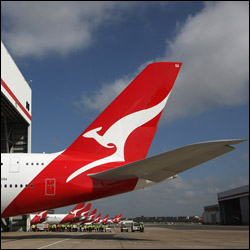 Qantas today confirmed that it would shortly migrate its corporate email platform from IBM’s Lotus Notes/Domino platform to Microsoft Exchange/Outlook.

Confirming a report this morning in the AustralianIT, Qantas executive manager of corporate services and technology David Hall said the process of migrating to Exchange had already begun, with piloting underway across the airline’s executive team.

“This is part of the Qantas technology group’s focus on leveraging technology to improve efficiencies for the business and enhancing communication effectiveness across our workforce,” said Hall.

“Subject to satisfactory piloting, we anticipate the migration to be substantially completed by the end of the year.” It is expected that around 20,000 staff will be migrated to the Microsoft platform.

Hall said Qantas would also be consolidating “a large number” of Lotus Notes applications and databases as part of its drive to “standardise, reduce and simplify” the number of business applications and tools it used.

Since moving up to his current role in October 2008 from his previous position as chief financial officer at Qantas subsidiary Jetstar, Hall has made dramatic changes to Qantas’ IT support operation.

In a landmark speech in August 2009, Hall said he believed Qantas could cut its IT costs by $100 million over the next financial year. Over the past couple of years the airline has pursued a number of IT outsourcing initiatives. For example, in mid-2009 some 200 Qantas staff were offered jobs at IBM as Big Blue took over responsibility for the airline’s project delivery servies.