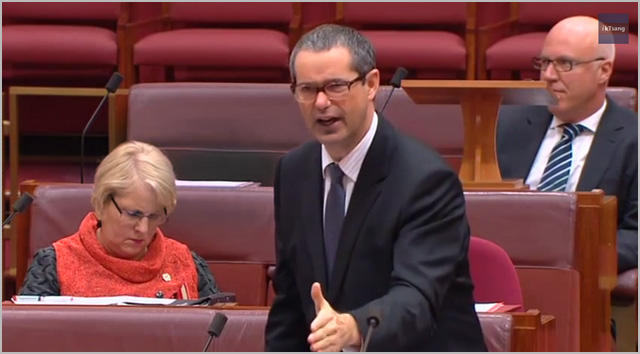 news Stephen Conroy has accused the Coalition of perpetuating an “absolute fraud” on the Australian public through its drastic reworking of Labor’s NBN project, with the former Communications Minister pointing out that the Coalition could not guarantee speeds on its planned infrastructure, and that no other country globally was buying back its incumbent telco’s copper network.

However, it is not clear why the Coalition is proceeding with the drastically watered down model, given that NBN Co’s Strategic Review published in December showed that Labor’s technically superior FTTP option could be delivered for only $15 billion and three years more.

Both options are also slated to make a modest return on the Government’s investment, and the Coalition’s model would need to be upgraded within as short a time period as five years. NBN Co executive chairman Ziggy Switkowski has acknowledged NBN Co cannot guarantee speeds under the MTM model due to the inherent nature of the copper infrastructure used for portions of the network.

On Tuesday this week, Conroy gave a major speech to the Federal Senate, attacking the Coalition’s MTM mix model. “$40 billion to deliver something that cannot guarantee the speed down or a speed up. What a bunch of geniuses!” Conroy said. The speech is available online on YouTube.

“And just for good measure they are the only company, and this is the only country in the world, that are trying to buy a copper network. Do you know what most companies around the world are doing with their copper network? They are selling it because it is worth more for the scrap value than the technology value. There are companies out there buying telcos’ copper networks to rip them out off the ground and sell them on the spot market. But no, not in this country. In this country we are going to buy the network and we are going to keep using it. Unbelievable. What a disgraceful waste of taxpayer dollars.”

“What we saw in the last election campaign was those opposite saying that this was about trust. All promises and guarantees before the election, but after the election no guarantee from anybody who actually understands the technology—no guarantee. And, most importantly, the MTM delivers inferior upload speeds that will disadvantage the millions of small businesses in Australia. That is right: they are going to spend $40 billion to disadvantage small businesses, particularly in regional and rural Australia. But despite all of this, the strategic review somehow assumes that the MTM will generate a similar revenue to an all-fibre rollout. They cannot deliver the top-end products and they cannot deliver the upload speeds that small businesses need, but they can make the same money! Absolute geniuses!”

Conroy specifically mentioned comments made by Communications Minister Malcolm Turnbull on an ongoing basis that alleged the Labor Senator had suffered what Turnbull habitually described as “Conrovian” madness.

“Mr Turnbull has put forward his multi-technology mess as some kind of antidote to what he describes, in that other place, as ‘Conrovianism’. Labor’s fibre-to-the-home NBN—Conrovianism. It is a disease he talked about in the other place.”

“Well, the big and exciting news for Mr Turnbull is that the world’s best broadband technology is being adopted around the world: in New Zealand, in Singapore, in China, in Japan, in Korea, in Spain, in France and in Indonesia—yes, in Indonesia as well,” said Conroy.

“Mr Turnbull claims he knows more about this than the guys at Google. Well, I know who I am putting my money on. Google is building fibre-to-the-home networks in Kansas City, Provo and Austin, and is planning to expand to other cities across the United States. But, unfortunately, Conrovianism seems to be approaching pandemic levels around the world, because all those countries are building fibre networks. Not one of them is buying a copper network off an incumbent telco—not one of them.”

“I want to be very clear about this: Labor decided to have fibre to the home because the advice of the experts told us that fibre to the node was not a cost-effective path. The strategic review actually reveals that a committed and active management can deliver—this is in Mr Turnbull’s own document—a fibre-to-the-home network on the basis of the last considered corporate plan, 2013-16. The strategic review has not made the case for a two-stage build as proposed by the coalition.”

On the same day in the House of Representatives, Turnbull had pointed out that a range of telcos globally were deploying the Fibre to the Node infrastructure which NBN Co is planning to deploy under its MTM mix model. In addition, the Communications Minister is also correct in pointing out that HFC cable networks are still being used and upgraded globally.

However, Conroy’s statement that no other country is buying the copper network of the telco incumbent back is also correct. In addition, Conroy is correct in that in every country, the long-term trend of fixed-line telecommunications infrastructure is towards Fibre to the Premises deployments.

In addition, especially in the US, a similar trend is occurring with broadband speeds, with companies such as AT&T, Cox Communications and Google, as well as cities such as Los Angeles, all planning to deploy telecommunications infrastructure capable of gigabit speeds. Such speeds are broadly not possible under much of the Coalition’s watered down NBN approach.

opinion/analysis
Stephen Conroy is clearly personally angry about the incredibly destructive and convoluted path the Coalition is taking with respect to the National Broadband Network project the Labor Senator masterminded. And he should be. I encourage those interested in the issue to take in Conroy’s speech in the Senate this week. It was a cracker.