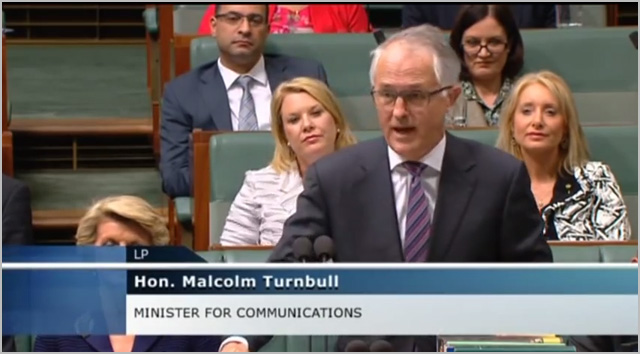 news Communications Minister Malcolm Turnbull has explicitly blamed construction contractor Visionstream for the Federal Government’s decision not to fully deploy the Fibre to the Premises model for the Coalition’s Broadband Network in Tasmania, claiming the company was not able to deliver the infrastructure at the cost it agreed to.

Many Tasmanians believe the Coalition, specifically Turnbull, committed the Coalition’s Broadband Network rollout (CBN) in the state to a full Fibre to the Premises deployment during last year’s Federal Election campaign. However, in fact, Turnbull never explicitly made such a promise; stating only that a Coalition Government would honour construction contracts signed by NBN Co. Some Tasmanians took this statement to mean that the Coalition would commit to a full rollout of Fibre to the Premises broadband in the state.

Speaking on ABC Radio in Tasmania last week, Switkowski confirmed Fibre to the Node would be used in Tasmania. “Obviously in the previous model, the infrastructure was going to be an all fibre infrastructure,” he said. “Post the election and post the strategic review, we’ve now agreed on a multi-technology model where we’ll seek to use a existing copper network where we can.”

In a separate statement last week posted on his website, Turnbull himself attempted to directly address the question of whether he and the Coalition in general had mislead Tasmanians on the issue.

“Did the Federal Government mislead voters when it promised to “honour existing contracts” in Tasmania?” Turnbull’s website states. “Wouldn’t it have been more accurate to state that you would “renegotiate existing contracts”? Why wasn’t it spelled out during the campaign that the contracts didn’t specify whether the NBN connection would be via fibre or via the existing copper network?”

The Minister’s response was as follows: “The NBN Co was prepared to honour the contract, the problem was that Visionstream said they could not make money at the rates which they had agreed to and demanded more money to continue construction. In fact as you know construction of the NBN in Tasmania slowed to a halt in the months leading up to the election. The NBN Co, under this Coalition Government, has got it moving again.”

The specific contract which Turnbull is referring to is a deal with Visionstream which was slated to see the company deploy most of the Tasmanian rollout of Labor’s then-National Broadband Network project. At that stage, before the Federal Election in September, the plan had been for the Tasmanian rollout to be fully based on Labor’s preferred Fibre to the Premises model.

However, late last year it was revealed that Visionstream had made little progress on the rollout. Subsequently, Turnbull published a statement implying that much of the problems with the rollout in Tasmania could be pegged to Visionstream, stating that the company has done little work in the state since July and was asking for its rates to be substantially enlarged to complete the work.

Visionstream itself has stated that it is still committed to continuing the rollout in Tasmania, and is actively working to get construction in the state back up and running.

Despite Turnbull’s comments about Visionstream, it appears that it was the Federal Government and NBN Co which made the decision to partially pursue a FTTN rollout in some areas of Tasmania. That decision appears to have been made in early December, when NBN Co published its wide-ranging Strategic Review.

The document recommended a so-called “Multi-Technology Mix” model for deploying the Coalition’s Broadband Network, which would only see Labor’s preferred FTTP model deployed to some 26 percent of the majority of the population, FTTN used for 44 percent, and the existing HFC cable networks owned by Telstra and Optus extended to cover the rest.

Turnbull’s statement last week also attempted to address the question of whether this rollout was “fair”, given that “some people will be connected via fibre, while their neighbours will have a slower connection via the upgraded copper network”.

In response, the Minister wrote: “There are currently 1.6 million houses in Australia that either have no access to broadband, or access to very slow broadband. This is unacceptable – our plan places a premium on ensuring these upgrades are conducted as quickly and efficiently as possible. In terms of ‘fairness’, it should also be noted the biggest contributor to the digital divide is affordability. Under Labor’s plan, consumers would have faced price rises of up to 80 per cent.”

The news comes as all major political parties in Tasmania have criticised the decision to deploy FTTN in Tasmania, including the Liberal Party. Tasmanian Liberal Leader Will Hodgman has reportedly spoken directly to Turnbull about the issue, arguing “strongly” that Tasmania needs a full rollout of Fibre to the Premises broadband technology

opinion/analysis
While I don’t have any direct evidence to disprove his statement, I don’t personally believe Turnbull when he writes that Visionstream’s costs are behind the changes to the Tasmanian rollout. I believe that that decision was made separately by NBN Co and the Government based on the current Coalition Government’s ideological preference for a Fibre to the Node style of broadband rollout. If Visionstream’s costs have truly been the problem in Tasmania, then there were ways around that — such as taking up the State Government’s proposal to deploy fibre aerially, or sourcing other construction contractors.

I’m not sure why Turnbull feels the need to redirect the blame to Visionstream in this way. What’s wrong with simply stating that the Federal Government believes that a FTTP model for the NBN costs too much in general, and the model in Tasmania will follow the model on the mainland? What’s wrong with stating that that decision was made based on NBN Co’s Strategic Review? I don’t understand why Turnbull feels the need to spin this sort of decision in a way that blames one of NBN Co’s key construction partners, avoiding any of the responsibility for the decision himself. Isn’t that the role of a Minister, to take responsibility for major decisions?