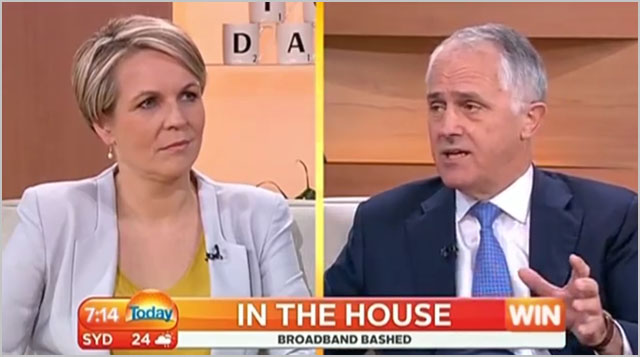 This article has been updated since it was published, following the receipt of new information. It appears Turnbull is incorrect in his statement that the document leaked to the SMH was created by NBN Co since months ago. It appears the document was created during the caretaker period of the recent Federal Election.

news The Sydney Morning Herald has published internal NBN Co information purporting to heavily criticise the Coalition’s rival FTTN model for the National Broadband Network. However, the information may not reflect the current state of play with the network or the Coalition’s plans.

In an inflammatory article published this morning, the newspaper stated that it had obtained what it described as NBN Co’s “internal analysis” of the incoming Abbott administration’s NBN policy, which the newspaper said had been prepared for the Coalition. The newspaper wrote: ” … the analysis casts doubts over the timing and cost-effectiveness of the government’s proposed fibre-to-the-node model, highlighting numerous legislative, construction and technical challenges likely to blow out the Coalition’s 2016 and 2019 delivery deadlines.”

The previous Labor Government’s NBN model would have seen the majority of Australian premises connected to a Fibre to the Premises network, the best available technology. In comparison, the Coalition’s more modest vision would have seen fibre only partially extended to premises, with the remainder using Telstra’s existing copper network, in a model dubbed ‘Fibre to the Node’. Each model has been used successfully internationally.

However, the Coalition’s plans are currently up in the air, pending the finalisation of a wide-ranging Strategic Review into NBN Co’s operations. The review will do a stocktake of NBN Co as the company currently stands as well as recommending options for the future deployment of the NBN.

The concerns raised in the SMH article this morning do match general concerns raised by many in the telecommunications industry with respect to the Coalition’s NBN policy.

For example, commentators have long highlighted the fact that they believe it will be difficult for the Coalition to meet its 2016 and 2019 targets to deliver 25Mbps and 50Mbps broadband speeds to most Australians. In addition, the FTTN model would require re-usage of Telstra’s problematic copper network, and would not deliver the same technical benefits or longevity of a more ambitious FTTP rollout.

However, there are also doubts as to how relevant the NBN Co document quoted by the Sydney Morning Herald this morning is.

Communications Minister Malcolm Turnbull claimed on the Today Show this morning (video available online) that the document had not, in fact, been prepared for the incoming Coalition Government. It had actually been prepared “more than six months ago” by NBN Co’s previous management for the then-Labor administration. This would have meant the document had been presented to then-Communications Minister Stephen Conroy. Conroy has not yet commented on the date the document was created.

“This document is A. Out of date and B. Defending a failed project,” Turnbull said this morning. Conroy has publicly acknowledged that the contractor construction model which Labor initiated for the NBN had failed, as NBN Co has repeatedly failed to meet its targets over the past six months and its relationship with a number of its contractors has collapsed.

“It has no credibility, absolutely none,” Turnbull said of the document. “Fairfax should have actually made it quite clear what the problems of that document were, and the truth is, that we will know what is actually going on with the NBN very soon, because there is a big strategic review under way at the moment, being overseen by the board of the NBN Co.”

However, Turnbull also has been less than transparent regarding the NBN project. While the document published by the SMH this morning appears to be significantly out of date, the Minister has access to much more recent information prepared for him as part of his incoming Ministerial briefing (the ‘Blue Book’).

Because of the pivotal nature of the document and the need for updated information, on 25 September Delimiter sought access under FoI laws to the ‘Blue book’ of briefing documents which was provided by the Department of Communications to Turnbull when he was sworn in as Minister. This document, which is 545 pages long (according to the department), consists of everything which the department believes Turnbull will need to know, and will include a prognosis on the Coalition’s NBN policy and how it can be delivered.

However, the Department has rejected other FOI applications for Turnbull’s Blue Book, and Turnbull himself has declined to release the document publicly. Delimiter plans to appeal any such rejection applied to our own application.

Image credit: Screenshot of the Today Show this morning