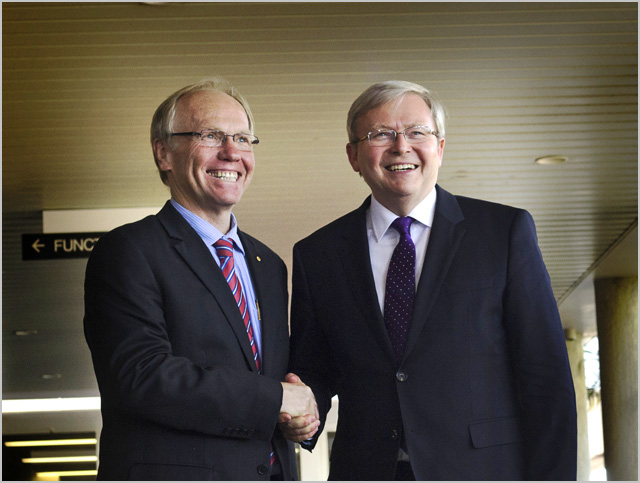 news Former Queensland Labor Premier Peter Beattie has published a strongly worded article stating that he is “ashamed” of Australia’s record on Internet piracy, in the latest sign that the two major sides of politics may be in agreement about the need to tackle the issue through new legislation.

In late October, the new Coalition Federal Government reportedly signalled plans to restart long-running talks between the telecommunications and content industries to deal with the issue of Internet piracy, despite the fact that a previous round of talks between the two sides under the previous Labor administration proved pointless.

The Australian newspaper reported at the time (we recommend you click here for the full article) that the Attorney-General’s Department had sent letters to the nation’s top telcos and content creators seeking their participation in a series of industry roundtables to resolve the online piracy issue “as a matter of urgency”.

It is not yet clear precisely what new Attorney-General George Brandis or the Attorney-General’s Department is seeking from the talks. Delimiter has filed a Freedom of Information request with the department seeking the text of any letters sent by Brandis or the Department to telcos on the issue since Brandis took office. Brandis has declined to answer fundamental questions on the Coalition’s plan for the area.

The last round of talks between ISPs and the content industry were also hosted by the Attorney-General’s Department, with departmental secretary Roger Wilkins believed to be taking a personal hand in an issue the bureaucrat has seen as important for the previous Labor Government. The talks were held between late 2011 and mid-2012 under Julia Gillard’s Labor administration, but ultimately broke down due to an inability of the two sides to come to any form of agreement.

However, it appears that the very same issue has now been raised by the Attorney-General’s Department with the new Coalition Attorney-General. Neither Labor nor the Coalition has publicly clarified their position with respect to Internet piracy, despite ongoing requests from the media in the area for both to do so.

The latest salvo in the war was fired over the weekend, with former Queensland Premier and senior Labor figure Peter Beattie publishing an extensive opinionated article in The Australian (we recommend you click here for the full article) stating that he was “ashamed” to say that Australians were among the highest illegal downloaders of pirated material in the world and agreed with Brandis that action needed to be taken on the issue.

“To save Australia’s creative talent we urgently need national legislative reform to stop online piracy, which is eating away at our creative industries,” wrote Beattie.

The former Labor Premier has, up until recently, had a dirct personal interest in advocating for existing copyright industries. In March 2011, Beattie was appointed chairman of the National Association of Cinema Owners (NACO), which represents both independent cinemas as well as major chains. NACO’s website states:

“The National Association of Cinema Operators-Australasia (NACO) represents its members in “whole of industry” issues that may confront them from time to time. Without limitation, licencing fees, film classification and piracy are issues that require a whole of industry response.”

In a speech to the association’s conference recently held in Queensland, Beattie handed over the chairmanship of NACO. However, the former Labor Premier also took the chance to mention what he said was an “urgent need” for legislative reform to address piracy, attacking what he described as “illegal overseas websites”.

“Disabling access to websites whose primary purpose is facilitating unauthorised access to copyrighted content will help dry up the money trough. If the legal risks start to outweigh the illegal profits then fewer players will pursue this criminal route.”

The news comes as an extensive survey conducted by respected analysis house Essential Research recently found that a huge proportion of Australians would continue to pirate content such as TV shows and movies online, even if such content was made available everywhere globally at the same time for a low price.

According to ongoing global research, Australians pirate more content online than almost any other nation. For example, when the series finale of popular AMC show Breaking Bad was released in the US through cable networks in early October, the episode quickly made an appearance on popular file-sharing sites, predominantly using the BitTorrent protocol. According to file-sharing news site TorrentFreak, the show was downloaded more than 500,000 times just 12 hours after the first copy appeared online.

However, not everyone believes the problem can be easily solved — and especially not through legislation.

In a fiery blog post published around the last known round of the anti-piracy talks in June 2012, iiNet regulatory chief Steve Dalby was highly critical of the content industry, including the Australian Federation Against Copyright Theft (AFACT), which iiNet that year won a high-profile High Court victory against in the area.

News of the renewed round of talks to be held by the Attorney-General’s Department has also attracted criticism from digital rights groups.

“Yet again we are faced with a government that is an enemy of the Internet,” commented Simon Frew, President of Pirate Party Australia, after the news of the talks broke. “Previous Attorney-Generals organised secret meetings between ISPs and the copyright lobby, deliberately excluding consumers, and now history repeats. We demand that any consultation about the future of the Internet be conducted transparently and include competent and trusted representatives of the community, not just vested interests.”

“File sharing is not the problem that needs solving,” said Brendan Molloy, Councillor of Pirate Party Australia. “Graduated response regimes and censorship mechanisms have been proven time and time again to fail to have an impact on file sharing. What has been proven to lower file sharing is convenient, affordable access to content, which is still lacking in Australia. This market access issue, as well as geocodes and other anachronisms of the Copyright Act, are the problems that needs solving, not file sharing.”

The Pirate party said graduated response regimes that result in disconnection from the Internet (better known as “three strikes” schemes) are shown to have limited to no impact on file sharing. Censorship regimes like the proposal being floated by the Attorney-General are circumventable within seconds, the party claimed.

“The Internet sees censorship as damage and routes around it. Work with your fans, not against them,” Molloy concluded.