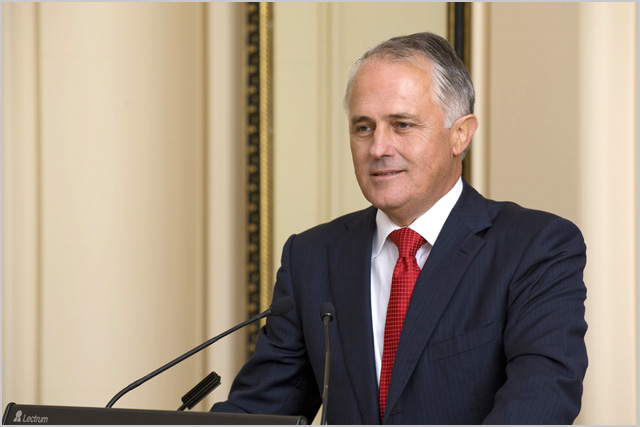 news Malcolm Turnbull’s Department of Communications has halved its processing charges for releasing the new Minister’s ‘Blue Book’ incoming briefing under Freedom of Information laws, citing the fact that release of the document would be consistent with the objects of the FoI Act and would resonate strongly with the public, although the final fate of the FoI request is not yet clear.

In Turnbull’s case, the Blue Book ministerial briefing is particularly important, because the post of Communications Minister will be a critical one for the Australian Government over the next several years. This is because the Coalition has promised to radically reshape Labor’s National Broadband Network, despite the fact that Labor’s NBN policy has always enjoyed overwhelming popular support amongst the general population.

In addition, there are a number of other key issues in the Communications portfolio which Turnbull will need to deal with, ranging from Internet censorship and filtering, digital rights, media law and so on.

Because of the pivotal nature of the role, on 25 September Delimiter sought access to the ‘Blue book’ of briefing documents which was provided by the Department of Communications to Turnbull when he was sworn in as Minister. This document, which is 545 pages long (according to the department), consists of everything which the department believes Turnbull will need to know.

After receiving Delimiter’s FoI request, the Department allocated processing costs to releasing the document of $2,070 — essentially, costs relating to internal examination of the issue of what portions of the Blue Book can be released publicly. Subsequently, Delimiter conducted a crowdfunding campaign through Pozible.com that raised some $2,877 to assist with funding the FoI request.

Yesterday, Andrew Madsen, Assistant Secretary of the Department’s Governance Branch, wrote back granting a reduction in fees for the release of Turnbull’s Blue Book. The total estimated fees have been reduced to $1,035.66, with a deposit of $258.92 needed for the process of releasing the document to progress. Delimiter has immediately paid the deposit to the Department of Communications.

You can download the full text (in ZIP format) of the three documents sent to Delimiter by the Department of Communications yesterday.

In an associated letter outlining his reasons for reducing the processing cost of the FoI request, Madsen wrote that he had considered various factors when deciding how to handle the issue. On the positive side, Madsen wrote:

“Release of the Blue Book would be consistent with the objects of the FOI Act, which include increasing scrutiny, discussion, comment and review of the government’s activities. In the case of the briefing documents this would include matters about broadcasting and communications and the national broadband network, matters which are consistently the subject of public interest, discussion and debate.”

“Whilst there is no presumption that the public interest test is satisfied simply because an FOI applicant is a journalist, it is likely that, as the applicant is a journalist, documents provided in response to the FOI request will be scrutinised for the purposes of informing the public or stimulating debate. The applicant is not required to show that Delimiter will publish the document or a related story. However, it is likely that any article published would be of general public interest.”

However, Madsen also noted other factors mitigating these positive factors in favour of the release of the document.

“The Blue Book comprises a set of documents which are, by their nature, readily identifiable as they were prepared for the specific purpose of briefing the new Minister,” wrote Madsen. “It does, however, include a very substantial number of documents, the majority of which have a high level of complexity and, by their nature, a significant level of sensitivity which, when combined, is likely to have an impact on the amount of time involved in making a decision on access.”

“In addition, a decision on access to the Blue book would need to consider whether there are broader ramifications for the operations of the agency and the role of the Department to provide frank and fearless advice to the Minister, beyond simply considering the documents individually.”

Madsen noted that several recent decisions on this kind of release could be pertinent to the release of Turnbull’s Blue Book. A number of other government departments have recently changed their stance on the release under FoI laws of ministerial briefings. Some, such as the Treasury, released the ministerial briefing papers prepared for the 2010 Federal Election, but have since changed their approach to the issue and blocked the release of documents prepared for the 2013 Federal Election.

The Department has previously noted that a large portion of Turnbull’s Blue Book may be redacted due to the sensitive nature of the briefing.

“I have also taken into account the anticipated number of pages that may be exempt from release after consideration of the exemption provisions in the FOI Act and the public interest factors relevant to conditional exemptions, though no decision on exemptions has yet been made,” wrote Madsen. “The Australian Information Commissioner has recently acknowledged that incoming government briefs are regarded by agencies, the Government and the Opposition as being of similar importance as ‘Cabinet documents’.”

“The Information Commissioner has also noted the confidential nature of the briefing that is provided by Departments directly to Ministers (see paragraph 59 of Crowe). The Information Commissioner’s decisions in Crowe and Cornerstone also deal at length with exemptions relating to s.s.47E(d), certain operations of an agency and s.4 7C, deliberative processes. Therefore, it is clear that the decision-maker will need to carefully consider multiple grounds for exemption and that as a consequence a significant amount of the material may be exempt from release.”

As previously noted, once the Department provides a final figure for the Blue Book FoI request, Delimiter will fund that payment out of the crowdfunding campaign. It is then our intention to return this funding to all campaign contributors in the proportion which they originally donated.

opinion/analysis
As I wrote in early October:

“We’d like to end this article with two points. The first is, once again, to thank readers for contributing to the often difficult process of keeping those in power accountable, especially on such a pivotal issue as the NBN. Your efforts are making a big impact. And secondly, we’d like to encourage Malcolm Turnbull to take note of the public interest in this issue.

Mr Turnbull, many Delimiter readers are serious enough about government transparency in your portfolio that they’ve already pulled money out of their own pocket to ensure it. How about at least meeting them halfway, coming through on your very public commitment to transparency, and releasing those sections of your ministerial Blue Book which are relatively harmless?

You were right in September when you said the NBN debate would continue, and you were also right when you said it was important that all sides were fully informed. Well, here’s a very obvious chance to match your words to your actions. I assure you any assistance you can impart in this area will be received very favourably.”