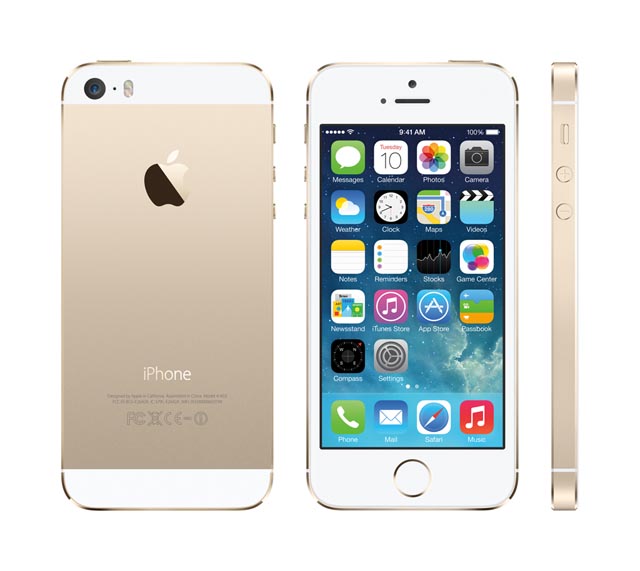 news Iconic technology giant Apple this morning announced that its new iPhone 5S and 5C models would be available in Australia from the company’s own stores and through every major mobile carrier from Friday 20 September, the same date they will be available in other major countries such as the US and UK.

The company unveiled the two new models overnight at an event in the US. The iPhone 5S is seen as being the primary replacement for the company’s flagship iPhone 5 model. Its main refinements include a fingerprint sensor integrated into the device’s home button, a new processor based on a 64-bit chip, a new side processor which captures data from the phone’s accelerometer, gyroscope and compass for greater power efficiency, and an improved camera and better flash.

Whereas the previous iPhone 5 model was available in a dark gray/black colour, in addition to white, the new iPhone 5S will also be available in a gold colour.

“iPhone 5s is the most forward-thinking smartphone in the world, delivering desktop class architecture in the palm of your hand,” said Philip Schiller, Apple’s senior vice president of worldwide marketing. “iPhone 5s sets a new standard for smartphones, packed into its beautiful and refined design are breakthrough features that really matter to people, like Touch ID, a simple and secure way to unlock your phone with just a touch of your finger.”

Apple has also launched a new iPhone line, the iPhone 5C, which has a different case model compared with the existing iPhone 5 and new iPhone 5S models. Whereas those models come with an aluminium casing, the iPhone 5C’s design is based on a similar kind of light and colourful polycarbonate casing as is found in Nokia’s Lumia models. The iPhone 5C will come in blue, green, pink, yellow and white.

The iPhone 5C’s featureset appears to be similar to that of the previous-generation iPhone 5, and Apple has also designed a number of “soft, matte, micro-fibre-lined cases” in different colours that have holes in the back to let some of the iPhone 5C’s colours through.

“iPhone 5c is everything iPhone 5 was and more, in an all-new design packed with great features,” said Apple’s Schiller. “iPhone 5c is designed with a beautiful polycarbonate enclosure that looks and feels so solid in your hand.” Apple also announced that it would make a new iPhone 4S 8GB model available for RRP A$529 including GST.

The new iPhone models will also run the version 7 of Apple’s iOS mobile operating system. The platform will also be available as a free software upgrade for most iPhones and iPads from two days before the iPhone 5S and iPhone 5C launch, on 18 September. “iOS 7 will be available as a free software update starting on Wednesday 18 September for iPhone 4 and later, iPad 2 and later, iPad mini and iPod touch (fifth generation). Some features may not be available on all products,” Apple said.

opinion/analysis
I think Apple’s done what pretty much everyone expected here, and what the cadre of analysts and journalists covering the company obsessively had predicted it would do. Some minor improvements to the already solid iPhone 5, and a new mid-range iPhone based on the iPhone 5 but in new colours and with a light polycarbonate casing.

If you’re an iPhone user and want to stay with the platform, you probably don’t want to bother upgrading if you already have an iPhone 5. However, if you have an iPhone 4, 4S, or something prior to that (3GS, for example), this is your upgrade. If you want the high-end and to stay future-proof as long as possible (or if you just like gold), go for the iPhone 5S. Otherwise, if you want a bit more colour, go for the iPhone 5C. We would, however, point out that there are already plenty of very colourful cases that would make an iPhone 5S look very much like an iPhone 5C: A favourite case for our household iPhone 5 is hot pink.

Will the fingerprint sensor turn out to be a big deal? Definitely, in the long-term, we would expect most smartphones to incorporate this kind of technology, and we can see it being used for mobile transactions. However, right now, as with other features such as NFC chips, it’s more of a nice to have, rather than a necessity.

If you’re an Android user and already have a fairly modern handset (say, something from the Galaxy S III up, there probably isn’t a whole lot of reason to consider switching back to the Appleverse for anything the company announced this morning. Personally, I own an iPhone 5 and a Nexus 4. I tend to use the Nexus 4 a lot more, however. Although it doesn’t have 4G speeds and is a bit banged up from a few adventures, I just love the form factor and the default ‘Nexus’ stock Android experience.